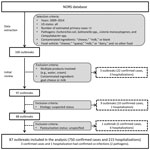 Figure 1. Process for selecting US outbreaks associated with cow’s milk and cheese, 2009–2014. Laboratory-confirmed cases are cases with illness in which a specimen was collected and a laboratory was able to confirm...
We used outbreak data from the National Outbreak Reporting System (NORS) (11) to estimate the incidence rates of illnesses and hospitalizations. NORS is a web-based platform that stores data on all foodborne disease outbreaks reported by local, state, and territorial health departments in the United States that have occurred since 2009. We included all outbreaks that occurred during 2009–2014 in which the confirmed etiologic agents were any of the 4 pathogens of interest (Campylobacter spp., Salmonella spp., STEC, and L. monocytogenes) and the implicated food vehicle or contaminated ingredient was milk or cheese (Figure 1). Outbreaks associated with multiple products; processed dairy products other than milk and cheese (e.g., cream, butter, yogurt, and kefir); milk produced by species other than cows; and cheese originating from species other than cows were excluded from the analysis (Technical Appendix 1). In addition, outbreaks with a suspected etiology status or associated with a dairy product with an unknown pasteurization status were excluded. 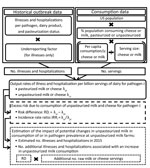 Estimation of the Incidence of Outbreak-Related Illnesses and Hospitalizations

We modeled the uncertainty of the pathogen-specific and pasteurization status–specific incidence rates of illness and hospitalization (λ) in the United States per serving of dairy product using a conjugate gamma distribution (13). The number of hospitalizations and laboratory-confirmed cases occurring during the study period (2009–2014) that were caused by a given pathogen after consumption of milk or cheese of a certain pasteurization status was obtained from the NORS database. For laboratory-confirmed cases, this number was adjusted for underreporting, under testing (only a proportion of suspected cases were sampled and tested), and underdiagnosis (based on diagnostic test sensitivity), in order to estimate illnesses for 2009–2014. These pathogen-specific factors were assumed to be independent of the product consumed and its pasteurization status, and constant for the years considered. The analysis did not include adjustment factors for potential misclassification in terms of etiology or pasteurization status. These 2 outbreak characteristics were carefully reviewed, and any outbreak for which the information could not be verified was excluded. It was thus assumed that etiology and pasteurization status misclassifications were negligible in this analysis.
Because NORS is a passive surveillance system, the inherent underreporting associated with it needed to be accounted for. We estimated an underreporting factor by using FoodNet data, which is an active surveillance system assumed to include virtually all identified cases (Technical Appendix 2). First, we extrapolated the total number of laboratory-confirmed cases in the US population during 2009–2013 using the incidence rates reported by FoodNet and considering the proportions of the US population included in FoodNet surveillance sites (14). Second, we estimated the total number of outbreak-related cases using the fraction of the US laboratory-confirmed cases that were outbreak-related (15). Third, we extracted the proportion of outbreak-related illnesses attributable to dairy (16). Fourth, we calculated the ratio of the number of outbreak-related, laboratory-confirmed cases linked to dairy consumption derived from the previously described calculations and the number of dairy-related, laboratory-confirmed cases reported through NORS to use as the underreporting factor in the analysis (Technical Appendix 2). When estimating the underreporting factor, we assumed that the FoodNet surveillance population and reporting practices were representative of the entire United States and that the food source attribution pertaining to the illnesses from confirmed and suspected outbreaks (16) were equally relevant to laboratory-confirmed cases from outbreaks of confirmed status only. We used the sensitivity of the diagnostic tests as described in Scallan et al. (15) to estimate the proportion of false-negative, laboratory-confirmed cases from NORS (underdiagnosis factor). Finally, we derived the under-testing factor by using the ratio of laboratory-confirmed primary cases to the estimated total number of primary illnesses reported to NORS (17).
The annual number of servings of milk or cheese of a given pasteurization status was calculated as the product of the number of servings of milk or cheese per person for a certain year, the resident population in the United States for that year (18) and the percentage of the population of dairy consumers that consume milk or cheese of a particular pasteurization status. The annual per capita consumption of a given dairy product (19) was divided by its average serving size (i.e., the amount of milk or cheese that is generally served) (7,20,21) to estimate the annual per capita number of servings of milk and cheese. These totals were then summed across the years of the study period. The per capita consumption data (19) were assumed to include both pasteurized and unpasteurized dairy products. Because unpasteurized dairy products constitute a small percentage of the total consumption, this assumption (if inaccurate) would likely have only a small effect on results. We also hypothesized that the serving sizes (7,20,21) were the same for pasteurized and unpasteurized dairy products.
The estimates of the proportion of dairy consumers that consume milk or cheese of a given pasteurization status were derived from the FoodNet Atlas of Exposure (12). Answers from this FoodNet survey are provided as aggregates per survey site, rather than per respondent. Therefore, answers regarding milk and cheese consumption were treated as independent. In addition, we assumed that respondents who reported consumption of unpasteurized milk or cheese did not consume pasteurized milk or cheese. Because the information to calculate the overall proportion of the US population consuming any type of cheese was unavailable, we assumed it to be equal to the proportion of the population reporting consumption of any cheese sold as or cut from solid blocks (i.e., the type of cheese consumed most commonly). We further assumed the proportion of the US population consuming unpasteurized cheese to be equal to the proportion reporting exposure to any cheese made from unpasteurized milk in the previous 7 days.

Effects of Hypothetical Changes in Consumption of Unpasteurized Milk or Cheese

We performed a sensitivity analysis to identify the parameters that most influenced our estimates. The sensitivity of the estimates to the input parameter uncertainties was calculated by using conditional means as implemented in @RISK 6.1.2 (Palisade Corporation, Ithaca, NY, USA). In addition, we assessed the robustness of our sensitivity analysis with a scenario analysis in which we calculated our estimates with different sets of outbreak data. For the main analysis, the model was run on outbreaks of confirmed etiology and pasteurization status. In the scenario analysis, the model was then re-run with either of the 2 following sets of outbreaks added to the main data set: outbreaks of suspected etiology status (17) and outbreaks involving dairy products of unspecified pasteurization status assumed to be caused by pasteurized dairy products.

The model was developed in Excel 2010 (Microsoft Corporation, Redmond, WA, USA) with the Monte-Carlo simulation add-in @RISK 6.1.2. Results are expressed as means and 95% credibility intervals (CrIs, a Bayesian equivalent to the confidence interval) or prediction intervals (PIs, which provides uncertainty bounds for predictions), unless stated otherwise.

Figure 3. Forest plot showing, on a logarithmic scale, the excess risk for outbreak-related illnesses and hospitalizations caused by consumption of pasteurized and unpasteurized milk and cheese, United States, 2009–2014. Markers indicate mean...
We calculated the excess risk attributable to the consumption of unpasteurized milk and cheese (Table 2; Figure 3). Because no reported illnesses were caused by Salmonella spp. and STEC during 2009–2014 and no hospitalizations were caused by Campylobacter spp., the corresponding incidence rates were extremely low (Table 2). Therefore, only RDs (and not IRRs) were reported for these pathogens. If all milk and cheese consumed were pasteurized, an average of 732 (95% PI 570–966) illnesses and 21 (95% PI 12–32) hospitalizations would be prevented per year in the United States. Of these prevented cases, 54% would be salmonellosis and 43% campylobacteriosis. The mean IRR of illnesses was 838.8 (95% CrI 611.0–1,158.0) overall from all 4 pathogens of interest (Figure 3), with 0.4 (95% CrI 0–1.2) from L. monocytogenes and 7,601 (95% CrI 3,711–15,346) from Campylobacter spp. The rate of hospitalization was higher for unpasteurized dairy consumers than for pasteurized dairy consumers (mean IRR 45.1, 95% CrI 33.7–59.2), with an IRR of 0.5 (95% CrI 0–1.7) for L. monocytogenes.

The following conditional means sensitivity analysis reports the change in the output mean if the input variable is set to its 5th and 95th percentiles while other inputs are sampled at random. The rates of illnesses (λ) caused by the consumption of unpasteurized milk and cheese were most sensitive to the underreporting factors (γ) for Salmonella spp. (mean range λ 34.9–72.5), Campylobacter spp. (mean range λ 33.1–45.3), and STEC (mean range λ 3.1–4.1), and at a secondary level to the undertesting (ρ) and underdiagnosis (μ) factors (results not shown). The overall IRR of illnesses was most sensitive to the underreporting factor for Salmonella spp. (mean range IRR 710.1–1,049.6). The number of illnesses per year caused by the consumption of milk or cheese was most sensitive to the rates of illnesses caused by Salmonella spp. and Campylobacter spp., as the main uncertainties apply to the incidence calculations for all pathogens (results not shown). Including the 9 outbreaks with a suspected-etiology status or the outbreak of unspecified pasteurization status (Figure 1) into the main analysis did not change the IRRs or the predicted number of illnesses or hospitalizations per year (results not shown).

The authors thank collaborators E. Hovingh, D.R. Wolfgang, and H. Lysczek for their valuable input on milk production and consumption. We also thank the anonymous reviewers for their helpful suggestions.
This work was supported in part by a United States Department of Agriculture Special Research Grant (no. 2010-34163-21179) and the Pennsylvania Agricultural Experiment Station.