A new CDC study provides compelling evidence that drug-resistant tuberculosis (TB) is set to rise over the next two decades in countries with some of the world's highest TB burdens. The study also suggests that person-to-person transmission, rather than inadequate treatment, will likely play an increasingly larger role in the spread of the disease in the future. 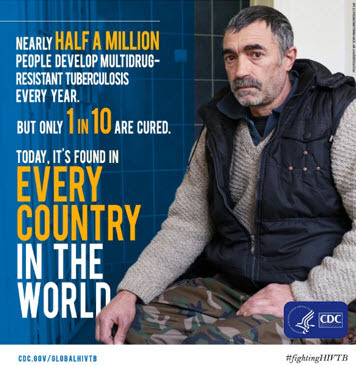 Drug-resistant TB is a major problem worldwide—and on track to get even worse.
In addition to infecting two billion people worldwide, TB can also become drug-resistant, which means the drugs we rely on to treat the disease are no longer effective. Drug-resistant TB is found in every country in the world and can kill millions if left unchecked or undiagnosed.
Using a complex mathematical model that brings together the best available data from multiple sources, the new CDC study, published in The Lancet Infectious Diseases, reports:
The paper underlines the importance of working together to:
CDC is on the frontlines to combat resistant TB at home and abroad.
Learn more about how CDC is working to find, cure, and prevent TB worldwide.