Too Many Parents Say No to Helmets for Kids on Wheels: MedlinePlus Health News

Too Many Parents Say No to Helmets for Kids on Wheels: MedlinePlus Health News

Too Many Parents Say No to Helmets for Kids on Wheels

Use of safety gear lags despite thousands of visits to U.S. hospitals each week, survey finds 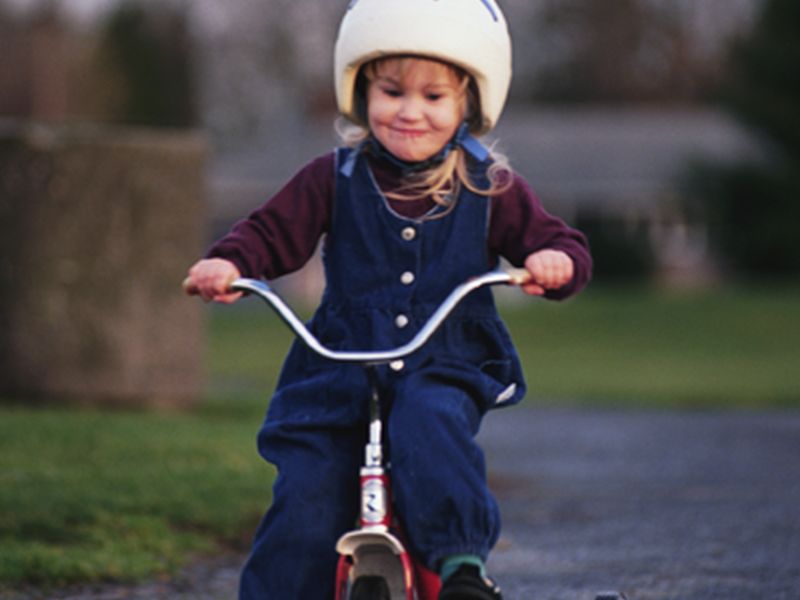 WEDNESDAY, May 10, 2017 (HealthDay News) -- Injuries from cycling or other wheeled activities send over 400,000 kids to U.S. emergency rooms each year. Yet, many parents don't require their children to wear helmets or other safety gear, researchers say.
Among 1,600 parents surveyed, about 40 percent said their child doesn't always wear a helmet when skateboarding, skating, scootering or biking, according to the report. The survey was conducted by SafeKids Worldwide and Nationwide Insurance Co.'s Make Safe Happen program.
Research shows that helmets and other protective gear are the best way to prevent injuries while riding. But these findings suggest that more work is needed to get children to use safety equipment, the researchers said.
"We know that kids follow their parents' lead, and if they see their parents wearing their helmets, it's much more likely they'll do so as well," said Torine Creppy, interim president at Safe Kids Worldwide.
"And just making sure that kids have a comfortable, properly fitted helmet will do wonders to keep that helmet in place and give kids a safe ride," Creppy added in a Safe Kids news release.
According to the report, more than 426,000 children -- that's more than 1,000 a day -- visited a U.S. emergency department in 2015 because of injuries from cycling, skateboarding, skating, or scootering.
The number of emergency visits for bike- and skateboard-related injuries fell 28 percent and 8 percent, respectively, between 2005 and 2015. But, visits for skate- and scooter-related injuries increased 4 percent and 40 percent, respectively, the findings showed.
Despite the sharp rise in scooter-related injuries, only 57 percent of parents said they made their children wear a helmet while riding a scooter. Head injuries accounted for nearly 20 percent of hospital admissions for scooter-related injuries, the study found.
Nearly half of the parents said they or the other parent don't always make their children wear a helmet. One-quarter said their kids refuse to wear a helmet because it's uncomfortable or not cool.
While head injuries are a major concern, most of the ER visits for wheeled sports in 2015 were for fractures, cuts and bruises. This shows that riders also need to protect their elbows, knees and wrists in case of a fall, the researchers suggested.
However, a minority of parents said they insist on knee and elbow pads when their kids use scooters or skates. Fewer still said their children always wear wrist guards.
Mike Boyd is senior vice president of marketing at Nationwide. "While it's encouraging that the bike-related injuries are down," he said, "the number of kids still getting hurt is far too high -- especially considering that many of these injuries could be avoided by simply wearing a helmet and other safety equipment."
Boyd added, "We're hoping this information will remind parents and children alike about the importance of wearing a helmet every time they bike, skate or ride a scooter."
Wednesday, May 10 is National Bike-to-School Day.
SOURCE: SafeKids Worldwide, news release, May 10, 2017
HealthDay
Copyright (c) 2017 HealthDay. All rights reserved.
News stories are written and provided by HealthDay and do not reflect federal policy, the views of MedlinePlus, the National Library of Medicine, the National Institutes of Health, or the U.S. Department of Health and Human Services.