By 85, many could use a hand, study finds 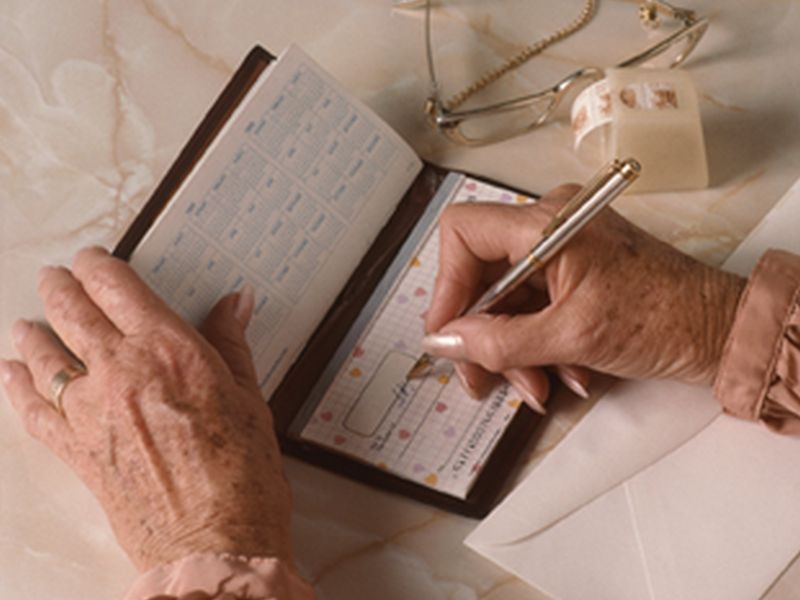 FRIDAY, April 28, 2017 (HealthDay News) -- Have you ever wondered when it might be time to step in and help your aging parents manage their finances? Or, their ever-growing list of prescription medications?
Researchers from the Netherlands did, and found that the vast majority of seniors over age 85 needed help with finances. And many also said they needed help managing their drugs.
But even younger seniors may need assistance. About one in 10 seniors aged 65 to 69 said they needed help managing medications, and nearly one-quarter reported needing help managing money.
The true incidence of these problems is likely even higher, experts in geriatrics said, considering the study's reliance on self-reported responses.
"I think geriatricians and geriatric psychiatrists are very aware that age is an important risk factor for developing greater difficulty managing medications or making financial decisions," said Dr. James Ellison, who wasn't involved in the research.
"Age is the single most important risk factor for developing cognitive [mental] impairment, which is a key issue in both of these [problems]," Ellison added. He's chair of memory care and geriatrics at Christiana Care Health System in Wilmington, Del.
An aging baby boomer population has fueled a dramatic increase in older adults in the United States. By 2050, adults over age 65 will account for more than 83 million U.S. residents. That's almost double the number from 2012, according to U.S. Census projections.
For the new research, lead author Nienke Bleijenberg and colleagues reviewed data from a nationally representative U.S. study. The researchers included almost 9,500 participants aged 65 or older in the study. None needed help managing medications or money at the start of the study. Follow-ups were done every two years for 10 years.
Between ages 65 and 69, 10 percent of seniors needed help managing medications and 23 percent needed help managing finances. By the time they were over 85, these rates rose to 38 percent and 69 percent, respectively.
Ellison said the decline of memory and sensory skills, such as vision, are among the factors that can contribute to seniors having problems with these two skills.
"The complexity of medication regimens is also a big issue," he said. "The average person over 60 is on five prescribed medications, and by 85, they're often on 10 medications."
Steven Austad is scientific director of the American Federation for Aging Research. He praised the study, saying the study group was designed to be representative of the American population in education levels, ethnicity and other aspects.
Many seniors are hesitant to ask for help, even after they notice their declining skills, said Austad.
"It's incumbent on close relatives and friends, or geriatricians, to let [seniors] know this is something they need to be aware of and that there's no shame asking for help," said Austad, who wasn't involved in the new research.
"Many of us ask for help doing our taxes, and for the same reason: it's complicated," he said.
Austad said it may be useful to add certain tests to annual physical exams for older adults that gauge their ability to calculate figures.
Ellison noted that health care providers should also be aware that medication management may be problematic for seniors. In addition, doctors should be aware that seniors are "vulnerable to financial exploitation."
"We already ask [seniors] questions but, in addition, we should be asking: are you having difficulty managing medications or making financial decisions?" he suggested.
About half of seniors may not realize that they're having difficulty in these areas, Ellison added. So, it's helpful if the doctor can double-check with a spouse or other relative to see if there are problems.
The study was published recently in the Journal of the American Geriatrics Society.
SOURCES: Steven Austad, Ph.D., scientific director, American Federation for Aging Research, and department chair, biology of aging and evolution of life histories, University of Alabama at Birmingham; James Ellison, M.D., M.P.H., Swank Foundation Endowed Chair, memory care and geriatrics, Christiana Care Health System, Wilmington, Del.; April 2017, Journal of the American Geriatrics Society
HealthDay
Copyright (c) 2017 HealthDay. All rights reserved.
News stories are written and provided by HealthDay and do not reflect federal policy, the views of MedlinePlus, the National Library of Medicine, the National Institutes of Health, or the U.S. Department of Health and Human Services.