My son was diagnosed in April 2014. He was 22 months old at the onset of his first seizures. We are 3 years in now, and no less perplexed by this shocking diagnosis.
Written by katecrawleydarling, published 24 days ago. 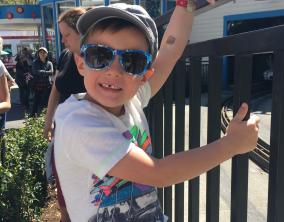 On April15th, 2014, we awoke to find our 22 month old son seizing in his bed. When we rushed him to our local fire department, the ambulance arrived and rushed him to the hospital. After days of still seizing despite numerous medications and tests including MRI's, CT scan, spinal taps, and more, we received his diagnosis of HHE. We had never even known anyone with epilepsy. No family history on either side. We were very lucky to live close to Greenville Memorial Hospital. We were placed with the on call pediatric neurologist, Dr Augusto Morales. He has been a God send for our Levi. Not only that, but he has worked with other HHE patients before. . His quick diagnosis helped spare Levi from further damage to his brain. The quick medication that Levi received helped stop his seizures. Even though he experienced the loss of his ability to walk or even crawl at that time. We brought a previously healthy happy boy into the hospital, only to leave 15 days later in a wheelchair. It was truly shocking and devastating. He lost almost all function of his left hand, yet still could move his arm if not eraticly. His left side of his face dropped, he could not support himself, nor swallow well. He was on an NG tube for less than a week before regaining his ability to eat. He had to be fed as he had lost his ability to accurately judge what his right side was even doing. We were moved back and forth to the pediatric floor from the PICU multiple times as his seizures would be controlled, then not. Turns out he has a very high metabolism for a child his size and was burning off his medications very quickly. That has lead to many visits to the blood lab to test his levels after going home. We have done EEG's but no MRI's since being home. We are very blessed that through almost 3 years of OT,PT and Speech therapy, he has regained most of what he lost. He walks, talks and interacts much like a regular boy his age. We have since been diagnosed with ADHD, which is very common in children with epilepsy. He struggles still but to the naked eye, many don't know the battle he is always fighting. He is strong, stubborn and determined. His older brother is a great encourager and helps him to always be aware of his left side, to not neglect that hand, and to strengthen his eyesight. Levi lost a chunk of his vision, mainly his peripheral on the left side from the seizures. Being as it is a brain thing, not actually his eye, there isn't anything to do about that. Levi also still struggles with core weakness and pelvic floor trouble. While most don't connect the two, epilepsy has delayed Levi's potty training. He will be 5 in June and has only in the last few months, gained control over his bowels. It was a tough road through Pelvic Floor therapy to get where we are today! All things considered, we are so lucky to be where we are. I know not all are so lucky. I have joined this group to learn more about this mystery diagnosis and compare war stories I guess.
Written by katecrawleydarling, published 24 days ago.
Publicado por salud equitativa en 12:01