RAISED levels of a tiny molecule in the bloodstream have been linked with prostate cancer metastasis, potentially helping researchers detect the spread of the disease sooner. 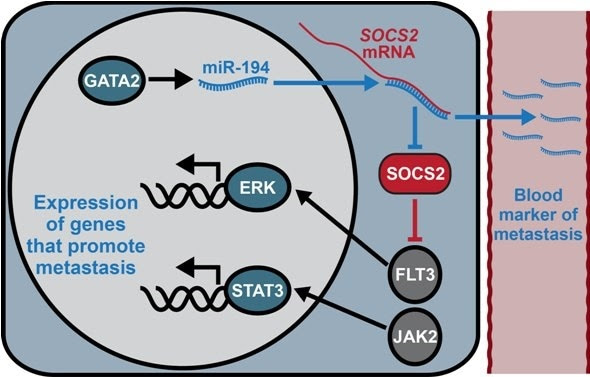 The study showed how miR-194 promoted cancer metastasis by inhibiting a key protein called SOCS2, which suppresses the spread of cancer cells.

“We previously identified a microRNA (miR-194) that was elevated in the bloodstream of patients who experienced a poor outcome following surgery,” he said.

“By studying the level of miR-194 in the blood at an early stage of disease, it now makes it possible to identify the patients that are likely to metastasise or who have already experienced metastasis that would not have been picked up by the scanning technologies that we currently have.

“The second significant thing about this new study is we could potentially develop a drug that could inhibit miR-194 and that drug could be used to treat patients by reducing the rate of metastasis.”

According to the Australian Institute of Health and Welfare there were about 18,000 new cases of prostate cancer in Australia last year and almost 3400 deaths.

Dr Selth said prostate cancer only killed men after they metastasised from the prostate.

He said the identification of markers could save lives if doctors were able to use them predict the likelihood of prostate cancer spreading at an early stage.

The research team is currently testing this idea using larger patient groups to validate their findings and test whether inhibiting miRNA in the lab could suppress the spread of cancer.

“The idea is to develop a test where if you have high levels of miR-194 in your blood and were likely to experience metastasis, then you could undergo more aggressive treatment strategies,” Dr Selth said.