World Leprosy Day is observed on the last Sunday of January each year. Established in 1954 by French philanthropist Raoul Follereau, it aims to raise awareness about leprosy (now called Hansen's disease) and teach people about this ancient disease and that it is easily curable today. While rare in the United States, many people around the world continue to suffer from this curable disease due to lack of access to basic medical care and continued stigma surrounding the illness.
Leprosy was renamed Hansen's disease after Norwegian scientist Gerhard Henrik Armauer Hansen, who in 1873 discovered the slow-growing bacterium now known as Mycobacterium leprae as the cause of the illness. It is difficult to catch, and it can take many years to develop symptoms of the disease following an infection. However, people who catch the disease can be cured with antibiotics.
Together, we can put a stop to discrimination and stigma against people with Hansen's disease. We can learn to recognize symptoms and know when to see a physician for diagnosis. Educate yourself and your community and separate the facts from the myths about Hansen's disease.

Around the world:
In the United States: 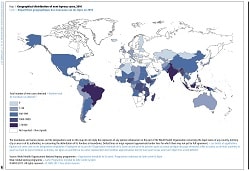 Geographical distribution of new cases of Hansen's disease reported to WHO in 2015. Courtesy of WHO. View large image and text description. 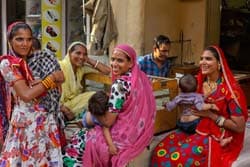 Hansen's disease mainly affects people in resource-poor countries who live in crowded conditions and have difficulty accessing health care due to long distances to clinics familiar with Hansen's disease, and high cost of going to the doctor. Because of this, despite the WHO's program to provide treatment for free, many of those affected don't complete it or don't receive it at all. In addition, due the continued stigma against people with Hansen's disease, they may not seek help when first symptoms appear, causing delay in diagnosis and development of disabilities.
Girls and women affected by Hansen's disease face the added issue of gender and social discrimination, which may also delay detection of the disease. In some countries, the law allows a person to legally divorce a spouse because they are affected by the disease. Unfortunately, this may leave many women destitute, homeless, and unable to care for their children.
Many people living with Hansen's disease are unable to work due to disability caused by the disease or may face stigma that prevents them from working.
The good news is that Hansen's disease is curable. Education and improving access to basic health services for all are keys to successful elimination of stigma and disability associated with the illness.

There are some common misconceptions about Hansen's disease that continue to cause confusion and fuel stigma and discrimination. Here are eight common myths and facts about the disease.

What You Can Do to Help

Many people think of leprosy as an ancient disease that was eradicated many years ago. But each year, thousands of men, women, and children all over the world develop this disease. Despite effective treatment, leprosy is one of the world's most stigmatized diseases, and people living with leprosy-related disabilities in many countries are shunned, denied basic human rights, and discriminated against. The stigma of leprosy affects the physical, psychological, social, and economic well-being of those with leprosy, contributing to the cycle of poverty in the affected regions.
During World Leprosy Day, we seek to increase public understanding of Hansen's disease and tackle the social stigma attached to this completely curable disease.

How can you do your part?