Spread and Evolution of Respiratory Syncytial Virus A Genotype ON1, Coastal Kenya, 2010–2015

In February 2012, the novel respiratory syncytial virus (RSV) group A, genotype ON1, was detected in Kilifi County, coastal Kenya. ON1 is characterized by a 72-nt duplication within the highly variable G gene (encoding the immunogenic attachment surface protein). Cases were diagnosed through surveillance of pneumonia in children at the county hospital. Analysis of epidemiologic, clinical, and sequence data of RSV-A viruses detected over 5 RSV seasons (2010/2011 to 2014/2015) indicated the following: 1) replacement of previously circulating genotype GA2 ON1, 2) an abrupt expansion in the number of ON1 variants detected in the 2014/2015 epidemic, 3) recently accumulation of amino acid substitutions within the ON1 duplicated sequence, and 4) no clear evidence of altered pathogenicity relative to GA2. The study demonstrates the public health importance of molecular surveillance in defining the spread, clinical effects, and evolution of novel respiratory virus variants.
Respiratory syncytial virus (RSV) is a major cause of pneumonia and bronchiolitis among infants and children globally (1,2). Although immune responses develop in those who have had RSV infection during childhood, these persons remain susceptible to RSV upper respiratory tract reinfection throughout life (3). No licensed RSV vaccine exists. Of the 11 proteins encoded by the RSV genome, the attachment glycoprotein (G) is the most variable and has been shown to accumulate amino acid changes over time (4). RSV is classified into 2 groups, RSV-A and RSV-B (5); each group is divided into genotypes (6), and these are further characterized into variants (7). Globally, RSV viruses belonging to different groups, genotypes, and variants often co-circulate in epidemics (7,8). The phenomenon of reinfection and difficulty in developing a vaccine may in part be due to the antigenic diversity and variability in the virus (9).
Two novel RSV genotypes with large duplications of amino acids in the attachment G glycoprotein have been detected globally. In 1999, the BA genotype was detected in Buenos Aires, Argentina; the genotype had a 60-nt duplication within the C-terminal region of the G gene (10). The BA variant subsequently spread rapidly throughout the world, becoming the predominant group B genotype, and in some regions replacing all previous circulating RSV-B genotypes (11). More recently, in December 2010, genotype ON1, with a 72-nt duplication (also within the C-terminal region of the G gene), was detected in Ontario, Canada (12). Viruses belonging to this genotype have rapidly spread and diversified globally (13–20). Such emergent genotypes appear to have a fitness advantage over preceding genotypes of the same RSV group (21). Of public health interest is whether increased fitness is associated with increased severity and immune evasion (with potential vaccine modality implications).
The temporal progression of RSV genotypes can be followed directly because of the unique tags (the duplications), which provides a rare opportunity to learn more about the introduction, spread, severity, and related selection processes (including immune evasion) for RSV and to obtain insights into the nature of emergence of novel virus variants. In this regard, we undertook an in-depth analysis of RSV-A genotype ON1 epidemiology in Kilifi, a county in coastal Kenya. In Kilifi, RSV epidemics typically begin during September–November of 1 year and continue until July–August of the following year, with a peak in cases during January–March. We have analyzed sequence data collected over 5 RSV epidemic seasons in Kilifi (2010/2011 to 2014/2015), which includes the period after the initial detection of this novel genotype within Kilifi.

The study was undertaken in Kilifi County and is part of surveillance aimed at understanding the epidemiology and disease effects of RSV-associated pneumonia cases in this region (22). Respiratory swab samples (combined nasopharyngeal and oropharyngeal) were collected from September 2010 through August 2015 from children ages 1 day to <5 years admitted to Kilifi County Hospital (KCH) with syndromically defined severe or very severe pneumonia (referred to here as lower respiratory tract infections, LRTIs), as defined in Table 1 and previously (22)

All specimens were screened for RSV by 2 methods (22–24). Raw samples were tested for RSV antigen by immunofluorescence antibody test (Chemicon International Inc., Temecula, CA, USA). Viral RNA was extracted from respiratory samples using QIAamp Viral RNA Mini Kit (QIAGEN, Hilden, Germany) and tested for RSV (differentiating groups A and B) by multiplex real-time reverse transcription PCR. All RSV-positive samples by either test were taken forward for processing. In addition, a small number of RSV-negative samples were sequenced.
The viral RNA was reverse transcribed into cDNA by using the Omniscript RT Kit (QIAGEN). The cDNA was then amplified with primers targeting the G ectodomain region (3,25), and the amplicons were sequenced by using BigDye version 3.1 chemistry on an ABI 3130xl (Applied Biosystems, Waltham, MA, USA). Sequence reads were assembled into contigs by using Sequencher version 5.0.1 (Gene Codes Corp., Ann Arbor, MI, USA). The sequences analyzed here have been deposited in GenBank (accession nos. KX453303–KX453534); previously reported sequences from Kilifi added to this analysis had also been deposited in GenBank (accession nos. KF587911–KF588014) (13).

To determine the relatedness of the Kilifi viruses to those circulating around the world and thereby clarify their global context, we downloaded all RSV-A G-gene sequences collected during 2010–2015; deposited in GenBank as of January 19, 2016; and 241 nt to 687 nt in length. A total of 995 sequences from 24 countries were used in this analysis. For the whole dataset and for some countries, we further grouped sequences by calendar year for temporal analysis. We subsampled unique sequences (sequences that differed by >1 nt from any other sequence over the sequenced region) by epidemic season (Kilifi only) or per calendar year.

We used MEGA 6.06 to infer maximum-likelihood phylogenetic trees under the general time reversible model with the site heterogeneity gamma model (27). This model was the best substitution model as determined by IQ-TREE version 1.4.2 (28). Bootstrapping with 1,000 iterations was implemented to evaluate branch support of the phylogenetic clusters. We assigned RSV-A genotypes as previously determined by Peret et al. (6) and Eshaghi et al. (12). To position the genotype ON1 viruses in the global context, we examined ON1 lineages as recently assigned by Duvvuri et al. (20).

We determined the number of genotype GA2 and ON1 variants circulating in Kilifi and globally using a recently developed pragmatic criterion (7,8). In brief, a variant is a virus or a group of viruses within a genotype that possesses ≥4 nt differences in the G ectodomain region when compared with other viruses. This analysis was done using usearch v8.1.1861 (29).

The N-glycosylation sites were predicted by using the NetNGlyc 1.0 server (30). We only considered the default Asn-X-Ser/Thr sequon (when X was not proline) for prediction. We also analyzed for patterns of change in amino acids using python scripts. Finally, we looked for potential positively selected and co-evolving sites using the Datamonkey server (http://www.datamonkey.org/). For positive selection analysis, we used 3 methods: SLAC (single likelihood ancestor counting), FEL (fixed effects likelihood), and MEME (mixed effects model for evolution). 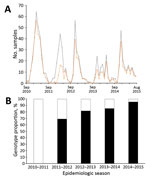 Figure 1. Circulating patterns of respiratory syncytial virus (RSV) in Kilifi, Kenya, September 2010– August 2015. A) Total RSV-positive cases (gray continuous line) and typed RSV-A samples (dotted orange line) by month. B)...
We found that 2 RSV-A genotypes were circulating in Kilifi: ON1 (n = 283, 58.6%) and GA2 (n = 200, 41.4%). The temporal prevalence of the total RSV, RSV-A, and genotypes ON1 and GA2 is shown in Figure 1 and Technical Appendix[PDF - 359 KB - 2 pages] Table 1. We observed rapid replacement of the previously circulating dominant GA2 genotype by ON1 in Kilifi, from a prevalence of 0% in the 2010/2011 epidemic to a prevalence of 67.4% in 2011/2012 when ON1 was first detected in Kilifi, and to 96.1% in the recent 2014/2015 epidemic. In addition, RSV-A predominated in 3 consecutive RSV epidemics from 2012/2013 to 2014/2015.
To investigate the demographic and clinical effects of RSV-A genotype ON1 in Kilifi, we compared the proportions of GA2- and ON1-infected case-patients by sex, age, clinical features of cough, difficulty in breathing, chest wall indrawing, inability to drink, hypoxia, prostration/consciousness, pneumonia status (severe or very severe pneumonia), length of hospital stay, and death at the hospital (Table 1). The proportions of both genotypes were very similar for the demographic and clinical characteristics analyzed. However, the proportion of patients with ON1 infection who were unable to eat was more than double that for GA2-infected case-patients (18.9% vs. 8.8%), and this difference was found significant by logistic regression (OR 2.40, 95% CI 1.31–4.36; Table 2). Nonetheless, the proportion with very severe pneumonia was no higher in ON1 infections than in GA2 infections (OR 0.89, 95% CI 0.57–1.39). 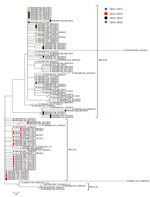 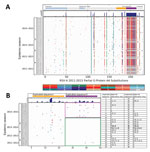 Figure 3. Amino acid substitutions in respiratory syncytial virus A (RSV-A) G protein for sequences isolated in Kilifi Kenya from season 2011/2012 to 2014/2015. All unique protein sequences per epidemic were collated, aligned...
The nucleotide variability and amino acid variability over the 4 seasons are shown in Technical Appendix[PDF - 359 KB - 2 pages] Table 2. Amino acid substitutions over the sequenced portion of the G protein are shown in Figure 3, panel A. Two codon positions possessed amino acid substitutions that distinguished between ON1 (232G, 253K) and GA2 (232E, 253T) viruses. In addition, the new ON1 [1.4] lineage viruses seem to have fixed a threonine (I/T136T) and acquired a unique substitution (P206Q) that distinguishes them from the other ON1 lineages.
Figure 3, panels B and C, illustrates amino acid substitutions within the duplication region of the Kilifi ON1 viruses. We designated the first set of 72 nt as duplication sequence I and the second set as duplication sequence II. Within this region, we observed that over the 3 seasonal epidemics from 2011/2012 to 2013/2014 and early (September–November) in the 2014/2015 epidemic, amino acid substitutions only occurred within the duplicated sequence I except for 3 substitutions in 2 viruses within the duplicated sequence II. Beginning in December 2014, however, we found numerous substitutions in duplicated sequence II with 2 adjacent and corresponding positions between the duplicated sequences I and II acquiring similar amino acid substitutions (i.e., Y273H and Y297H, P274L/S and P298L/R). Furthermore, sites 273 and 297 were detected to be co-evolving from the Spidermonkey analysis (http://www.datamonkey.org/). However, only 1 ON1 codon site (251) was identified to be positively selected with p<0.05 by >1 method (SLAC, FEL, or MEME).
Using global datasets for genotypes ON1 and BA, we compared the temporal detection of RSV variants within each of these genotypes during the first 5 and 10 years, respectively, from initial detection (Technical Appendix[PDF - 359 KB - 2 pages] Table 3). We observed an explosion of new ON1 variants globally, from 8 variants in 2011, to 78 variants in 2012, to 153 variants in 2013. However, the number of ON1 variants decreased in 2014 and 2015, which corresponded with a substantial decrease in both the number of ON1 sequences available in GenBank and the countries that have deposited sequences from these years. On the other hand, the number of BA variants seemed to follow a stepwise or punctuated pattern, whereby the number of variants was stable at 1–6 during 1996–2001, dramatically increased and stabilized at 20–30 variants during 2002–2004, and again sharply rose to 82 variants in 2005 (Technical Appendix[PDF - 359 KB - 2 pages] Table 3). At the country level (Technical Appendix[PDF - 359 KB - 2 pages] Table 4), the rapid rise in the number of ON1 variants detected in Kilifi was also observed in the Philippines and Germany, although the number of BA variants detected in some of the countries sampled remained relatively stable over time.