Snapshots of Life: Portrait of a Bacterial Biofilm

In nature, there is strength in numbers. Sometimes, those numbers also have their own unique beauty. That’s the story behind this image showing an intricate colony of millions of the single-celled bacterium Pseudomonas aeruginosa, a common culprit in the more than 700,000 hospital-acquired infections estimated to occur annually in the United States. [1]. The bacteria […] 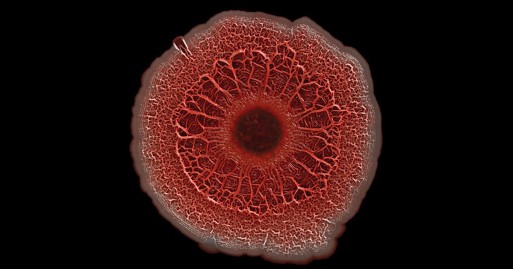 Credit: Scott Chimileski and Roberto Kolter, Harvard Medical School, Boston
In nature, there is strength in numbers. Sometimes, those numbers also have their own unique beauty. That’s the story behind this image showing an intricate colony of millions of the single-celled bacterium Pseudomonas aeruginosa, a common culprit in the more than 700,000 hospital-acquired infections estimated to occur annually in the United States. [1]. The bacteria have self-organized into a sticky, mat-like colony called a biofilm, which allows them to cooperate with each other, adapt to changes in their environment, and ensure their survival.
In this image, the Pseudomonas biofilm has grown in a laboratory dish to about the size of a dime. Together, the millions of independent bacterial cells have created a tough extracellular matrix of secreted proteins, polysaccharide sugars, and even DNA that holds the biofilm together, stained in red. The darkened areas at the center come from the bacteria’s natural pigments.
Scott Chimileski, a postdoc in Roberto Kolter’s lab at Harvard Medical School, Boston, created this image of a Pseudomonas biofilm—a winner in the Federation of American Societies for Experimental Biology’s 2016 BioArt competition—using a standard, professional DSLR camera. He used a macro lens to capture many close-up images of the bacterial colony that he later stitched together on a computer into one ultra-high resolution image. As a result, he’s able to zoom in on the image to examine fine details of the biofilm structure. He can also enlarge the image to print the bacterial colony at 100 times its actual size.
Chimileski specializes in finding new ways to image microbes and their macroscopic three-dimensional structures. With an improved view of bacteria, he and his colleagues hope to learn more about how bacteria form biofilms. They’re also exploring how microbial communities respond to their environments and other bacterial species.
The researchers hope these insights will ultimately help lead to new strategies for fighting disease-causing bacteria. In addition to killing bacteria outright with traditional antibiotics, it may someday be possible to fight infection by stopping bacteria from communicating with each other or forming biofilms.
Besides his work as a scientist, Chimileski is truly a bio-artist. Part of his mission in creating images like this one is to encourage other scientists and members of the general public to give microbes the appreciation they deserve. And, if you like what you see here as much as I do, you’ll be happy to know that Chimileski and Kolter are spearheading a full exhibition on microbial life, scheduled to open at the Harvard Museum of Natural History next fall.
Reference:
[1] HAI Data and Statistics, Centers for Disease Control and Prevention, October 5, 2016.
Links:
Pseudomonas aeruginosa in Healthcare Settings (Centers for Disease Control and Prevention)
Kolter Lab (Harvard Medical School, Boston)
Scott Chimileski’s Portfolio
BioArt (Federation of American Societies for Experimental Biology, Bethesda, MD)
NIH Support: National Institute of General Medical Sciences