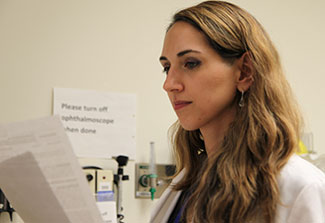 When Dr. Laura Lewandowski told her U.S. peers that she had been awarded a Fogarty Global Health Fellowship to study pediatric lupus in South Africa, she says they were perplexed. "There's so little literature on systemic lupus erythematosus, or SLE, in Africa that colleagues assumed it happened less frequently there than in the U.S., if at all," Lewandowski explained.
But doctors in South Africa said they were overwhelmed with young lupus patients who, Lewandowski knew, are at greater risk than adults for severe forms of the disease. Studies have found that lupus, which causes the body's immune system to attack healthy cells and tissues, is also more common and severe in people of African descent.
So, armed with her Fogarty fellowship and an award from Duke University, where she earned a master's degree and completed a fellowship in pediatric rheumatology and global health, Lewandowski set off for South Africa, home to five of the seven pediatric rheumatologists in all of Africa. Working with Dr. Chris Scott, a professor at the University of Cape Town and head of the rheumatology department at Africa's only children's hospital, Lewandowski analyzed the medical records of 72 children - mostly of African ancestry - who had sought treatment for lupus.
When she compared data on disease presentation, severity and outcomes in the South African cohort with a registry of 900 lupus patients in North America, Lewandowski found that South African children tended to develop the condition at a younger age than their U.S. counterparts, and were likely to have "severe active SLE at diagnosis," Lewandowski says in a report of the study published in the journal Lupus. Interviews with the South African patients' families found that barriers to diagnosis and care likely influenced the severity of disease at diagnosis, the report says.
Undiagnosed lupus can cause kidney failure, anemia, arthritis, cardiovascular conditions and neuropathy, among other ailments. Standard treatment in the U.S. involves the use of anti-inflammatories, including steroids. Many of the South African children in the study had suffered strokes and sudden onset blindness in spite of numerous visits to medical professionals, who gave the patients no reason for their illness, Lewandowski said.
"We need to think about early diagnosis and easier access to care for this high-risk population because if you go into end-stage renal disease because your lupus was missed for a long time, South Africa's lack of resources means that may be a death sentence," Lewandowski said.
Lewandowski is continuing her pediatric SLE research at NIH's National Institute of Arthritis and Musculoskeletal and Skin Diseases (NIAMS), which she joined in 2015 as a Lawrence Shulman Scholar in Translational Medicine. Mentored by Dr. Mariana Kaplan, Lewandowski is focusing her NIAMS research on the inflammation that drives lupus, and whether genetic variants may cause some children to develop the autoimmune illness very early in life. She is also studying what causes people of African descent to suffer such a severe form of lupus.
The Fogarty fellowship gave Lewandowski unique skills and experiences that she says helped her get a position at NIAMS and allowed her to take "the first step toward filling the large research gap in pediatric lupus in Africa." Dr. Scott hails Lewandowski's Fogarty-supported research as indispensable in "highlighting the silent suffering of children with lupus in Africa."
"I've always had an interest in underserved populations, and doing research in South Africa that seemed to have a big impact on people was very rewarding," Lewandowski said. Her research has been expanded into Mexico, and she hopes one day to compile an international comparison of lupus patients of different ethnicities.