What are the early signs and first symptoms of meningitis?

Thankfully, meningitis is a rare condition. Although it can occur in anyone, it's more prevalent in babies and young children, with young people and students being the next most at risk group.

In the early stages, it can be very difficult to tell meningitis apart from milder diseases, as it often resembles other common viral illnesses. Symptoms of the disease can develop very quickly. 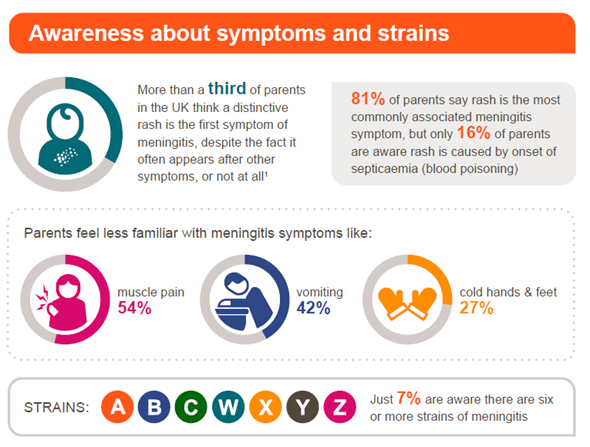 In babies and young children, symptoms may include a bulging soft spot, fretful cry, rapid breathing, vomiting, refusal to feed, drowsiness and being difficult to wake up. There's a classic symptom of a rash which develops a little bit later.

In adolescents and young adults, we tend to look out for vomiting, diarrhea or stomach cramps, drowsiness, disinterest, confusion or being less responsive, severe headache, shivering, a dislike of bright lights, stiff neck and muscle pain, very cold hands and feet and the rash.

As a parent, it’s important to ask yourself if it’s something that goes beyond the usual sort of mild viral infection.

At what stage does the distinctive rash occur and what does it look like? Does a rash always occur?

The classic symptom that many people know about is the development of the rash, which doesn't fade when a glass is rolled over it. It does not always occur and it's not the first stage of meningitis. Usually you get those other more general symptoms first, and then a rash would develop later, if at all.

The rash is quite distinctive. It's essentially to do with microhaemorrhage or bleeding within the skin itself.

How quickly should you seek medical attention if you suspect meningitis? Should you go to A&E?

Meningitis and septicemia can kill in hours, making it vital to be aware of the symptoms and seek medical attention accordingly. Trust your instincts - as soon as you feel that this is something beyond the usual, you should seek the nearest medical help immediately.

What age ranges are at risk of meningitis? 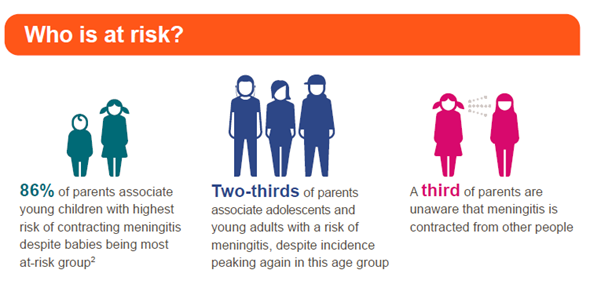 Incidence peaks again in adolescents and young adults, which can result from large groups being in the same place at one time, for example going to college or university. Particularly in the UK, there is a peak of incidents in the 20 to 24-year-old age group.

How is the disease passed on?

Meningitis comes from many different causes and many different infections, so it could be a viral or bacterial infection. It's an infectious disease and it can be passed on by close contact, coughing, sneezing and being close to people who carry that bacteria or virus.

There are also other sorts of infections that cause meningitis such as haemophilus and pneumococcal, and even measles, mumps and rubella can cause it. A portion of the population do actually have the bacteria within their system, without it causing any symptoms at all. However, in others it can lead to meningitis.

Meningitis is a rare disease - it doesn't affect a lot of people, but when it does, it can be very severe.

Are there different strains of meningitis?

What vaccines are available? Do these protect against all strains?

Do you think it will be possible to develop vaccines to protect against all strains in the future?

It would certainly be something to head towards, but as I said, there are different causes of meningitis, not just different strains of one particular infection.

I think we can strive towards trying to create the vaccines to cover those, but will we get to one that covers all of them? That is probably unlikely. What’s important is to do as much as we can to take care of the most prevalent causes to reduce the number of cases in the community. By doing that, you help to protect the broader community. Research goes on. 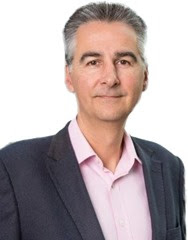 Dr Stephen McDonough is Vice President Medical Director for GSK UK and Ireland. He studied medicine at the University of Nottingham, graduating in 1990 and worked as a physician in hospital and general practice for eight years.

Stephen is a specialist in pharmaceutical medicine and a Fellow of the Faculty. During his 18 years in industry he has worked in UK, Ireland and in global roles in a variety of organizations from small biotech to large pharma.

He has worked in medical affairs, research and development and health outcomes functions. He also has an MSc in Health Economics, Policy and Management from the London School of Economics and Political Science.
Publicado por salud equitativa en 5:30