Brucellosis, a zoonotic disease, was made statutorily notifiable in China in 1955. We analyzed the incidence and spatial–temporal distribution of human brucellosis during 1955–2014 in China using notifiable surveillance data: aggregated data for 1955–2003 and individual case data for 2004–2014. A total of 513,034 brucellosis cases were recorded, of which 99.3% were reported in northern China during 1955–2014, and 69.1% (258, 462/374, 141) occurred during February–July in 1990–2014. Incidence remained high during 1955–1978 (interquartile range 0.42–1.0 cases/100,000 residents), then decreased dramatically in 1979–1994. However, brucellosis has reemerged since 1995 (interquartile range 0.11–0.23 in 1995–2003 and 1.48–2.89 in 2004–2014); the historical high occurred in 2014, and the affected area expanded from northern pastureland provinces to the adjacent grassland and agricultural areas, then to southern coastal and southwestern areas. Control strategies in China should be adjusted to account for these changes by adopting a One Health approach.
Brucellosis is a bacterial zoonosis caused by Brucella spp., which can be transmitted from animal reservoirs, such as cattle, sheep, goats, and pigs, to humans through direct contact with infected animals or ingestion of unpasteurized animal products (1–3). The global epidemiology of brucellosis has drastically changed over the past decades, particularly in industrialized countries where the disease was previously endemic but is now mainly associated with returning travelers. However, brucellosis remains a serious concern in low- and middle-income countries, which have most new human cases globally (estimated ≈500,000 cases annually) and major economic losses in animal production resulting from the adverse effects of infection on livestock reproduction (2,4,5). Additionally, human brucellosis is of particular concern because of high initial treatment failure, substantial residual disability of infected patients, and relapse rates (1,6). Moreover, Brucella spp. are highly infectious through the aerosol route, making them a potential agent of biological weapons and bioterrorism (7).
In China, brucellosis was first recorded as Malta fever for 2 foreigners in Shanghai in 1905, but several patients in China who had similar clinical symptoms had been observed in the 10 years before this report (8). After this report, 3 cases were reported from Chongqing in 1906 (9). The first person with a definite diagnosis of Brucella infection by serologic tests was reported from Fujian in 1916 (10). Subsequently, Brucella sp. was isolated from a foreigner and his goats who traveled from Punjab, India, to Henan Province, China, in 1925 (11), and human infection in a laboratory setting was reported in Beijing in 1936 (12). Thus, human brucellosis was seen in China before 1950, especially in the northern provinces (13).
Since 1950, activities for prevention and control of brucellosis have been gradually introduced in mainland China (14,15). During 1950–1963, the reporting for human brucellosis was established nationwide, and some surveys were conducted. Vaccination for animals and humans was implemented as the main control measure during 1964–1976 in regions with severe epidemics, such as Inner Mongolia, Xinjiang, Qinghai, Ningxia, and Henan Provinces (14). During 1977–1988, a national program for brucellosis control was conducted with the introduction of diagnostic criteria, treatment protocols, and control measures, and vaccination of domestic animals was used as the main control measure. National sentinel surveillance was established in 1990 to monitor the seroprevalence of brucellosis in humans and animals (16).
During the past decade, outbreaks of human brucellosis have been reported in increasing numbers and with an apparent geographic expansion from the historically affected north of China (17,18) to southern provinces where nonoccupational exposure might be more common because of the increasing movement of humans, animals, and animal food products from brucellosis-endemic regions (19–21). The epidemiology of human brucellosis clearly presented major challenges in China during the past 60 years, but studies reporting the spatial–temporal patterns of human brucellosis with high-quality, nationwide incidence data are lacking (2,4,14,22,23). We describe the magnitude and distribution of human brucellosis in mainland China using the notifiable reporting data for 1955–2014 and emphasize its recent reemergence. Improving our understanding of the changing epidemiology of brucellosis and identifying high-risk areas can help in formulating plans for national strategies to prevent and control brucellosis.

On July 5, 1955, human brucellosis was made statutorily notifiable in China: all probable or laboratory-confirmed new brucellosis cases were required to be reported (Technical Appendix[PDF - 485 KB - 11 pages] Table 1). In this study, we used 2 datasets because the requirements for reporting changed during the study period (24). One comprises the number of brucellosis cases aggregated by case-patient sex, age group, and occupation; incidence rate; death rate; and case-fatality ratio (Technical Appendix[PDF - 485 KB - 11 pages] Table 2), reported monthly through paper-based post or electronic files during 1955–2003. The other consists of individual brucellosis cases reported by doctors within 24 hours after diagnosis to the online National Notifiable Infectious Disease Reporting Information System at the Chinese Center for Disease Control and Prevention during 2004–2014. (Variables in individual datasets are available in Technical Appendix[PDF - 485 KB - 11 pages] Table 3.) All data used in this study were anonymized so that individual patients could not be identified.
The National Health and Family Planning Commission of China determined that the collection of data from human cases of brucellosis was part of continuing public health surveillance of a notifiable infectious disease and was exempt from institutional review board assessment. All data were supplied and analyzed in an anonymous format, without access to personal identifying information.

Our analysis comprised all probable and confirmed cases in persons with illness onset from January 1, 1955, through December 31, 2014. According to the National Mid-term and Long-term Animal Disease Control Plan of China (25), all the provinces in northern China were identified as the key regions for brucellosis control. Therefore, we aggregated the surveillance data of each province to northern and southern China (Technical Appendix[PDF - 485 KB - 11 pages] Table 5), as previously reported (26), to examine spatial–temporal patterns by region. To eliminate the potential effect of the introduction of Internet-based reporting on the increasing number of cases since 2004, we made a time-series prediction of the number of cases in 2004 on the basis of data for 1993–2003, using the Holt exponential smoothing method with a 95% CI (27). Then we compared the upper value of the 95% CI with the actual number of cases in 2004 to calculate the excess proportion of cases that might have contributed to improved data reporting. Adjusted incidence rates for 2004–2014 were estimated by using this excess proportion and plotted as an epidemic curve. We also predicted the monthly numbers of cases during the next 5 years (2015–2019) by Holt-Winters exponential smoothing on the basis of data reported during 2004–2014 to explore the trend of incidence with seasonality (27).
We created a heat map of the yearly incidence rate to visualize the long-term change over the 60-year period by province. We also created a heat map of the monthly number of cases reported during 2005–2014 by province, standardized by the yearly number in each province, and plotted a heat map of average weekly proportions of case numbers by province to explore the seasonal pattern during 2005–2014. To test the differences between northern and southern China, we used Mann-Whitney U tests with a significance level of α = 0.05 to test for differences in the time from illness onset to diagnosis and χ2with a significance level of α = 0.05 to test the differences in the proportion of imported cases. The R statistical software (version 3.1.2, R Foundation for Statistical Computing, Vienna, Austria) with the package forecast (version 6.1), was used to produce the graphs and heat maps and to perform statistical analyses and prediction, and ArcGIS 10.2.2 (ESRI, Redlands, CA, USA) was used to plot the geographic patterns. 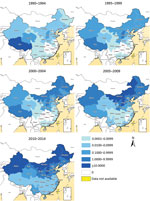 Figure 4. Geographic distribution of the annual incidence rate per 100,000 residents of human brucellosis by 5-year periods, mainland China, 1990–2014.
Similarly, the incidence in southern China has increased since 2000, and human brucellosis has emerged or reemerged in all provinces of southern China. Cases have been reported in almost every province and year since 2010. This finding contrasts with the distribution of brucellosis before 2000, when the disease was limited to a few provinces in southern China, such as Sichuan, Guangxi, and Guangdong (Figures 3, 4; Technical Appendix[PDF - 485 KB - 11 pages] Figure 2). Additionally, the proportion of imported cases was higher in southern than northern China (58.5% vs. 40.5%; p<0.001), but cases in southern China had a longer lag from illness onset to diagnosis than did those in northern China (21 vs. 20 days; p = 0.003) (Table). 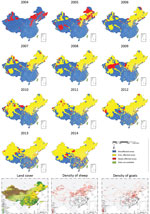 Figure 6. Geographic expansion of human brucellosis across counties and distribution of land covers (28) and density of sheep and goats (29), mainland China, 2004–2014.
Correspondingly, the number of counties reporting human cases in mainland China increased from 87 in 1993 to 1,723 in 2014; each year since 2004, hundreds of counties were newly affected (Figures 5, 6). The proportion of counties affected in southern China increased from 1.1% in 2004 to 20.5% in 2014, highlighting the spatial spread over the past decade. From a land cover perspective, during 2004–2014, affected areas seem to have expanded from the provinces in northern pastureland areas to the adjacent grassland and agricultural areas that have a high density of sheep and goats, then to coastal areas and southeastern China (Figure 6).

We thank staff members at the hospitals; local health departments; and county-, district-, prefecture-, and province-level Chinese Centers for Disease Control and Prevention for providing assistance with field investigation, administration, and data collection.
This study was funded by the National Science Fund for Distinguished Young Scholars of China (no. 81525023), the Ministry of Science and Technology of China (2016ZX10004222-009, 2014BAI13B05), and the US National Institutes of Health (Comprehensive International Program for Research on AIDS grant U19 AI51915). A.J.T. is supported by funding from the National Institutes of Health/National Institute of Allergy and Infectious Diseases (U19AI089674), the Bill & Melinda Gates Foundation (OPP1106427, 1032350), and a Wellcome Trust Sustaining Health Grant (106866/Z/15/Z).
The funding bodies had no role in study design, data collection and analysis, manuscript preparation, or decision to publish. H.Y. had full access to all the data in the study and had final responsibility for the decision to submit the manuscript for publication.