Although hookworm is highly prevalent in the Solomon Islands, the species involved are unknown. We initiated this study in response to finding Ancylostoma ceylanicum hookworm in a peacekeeper in Australia who had returned from the Solomon Islands. Kato-Katz fecal surveys performed in 2013 and 2014 in 2 village groups in East Malaita, Solomon Islands, identified hookworm-positive samples. These specimens were tested by cytochrome oxidase 1 (cox-1) gene multiplex PCR and sequenced. Of 66 positive specimens, 54 (81.8%) contained only Necator americanus, 11 (16.7%) contained only A. ceylanicum, and 1 (1.5%) contained both species. A. duodenale was not found. Haplotype analysis of cox-1 sequences placed all human isolates (99% bootstrap support) of A. ceylanicum within the zoonotic clade rather than the human-specific clade. This study confirms that A. ceylanicum is endemic in the East Malaita region of this Pacific Island nation. The strain of the A. ceylanicum in this region can be shared among humans, dogs, and cats.
Hookworm disease, caused by blood-feeding worms of the small intestine, affects nearly 1 billion persons worldwide, with more than half of infections in the Asia-Pacific region (1). This disease causes iron deficiency anemia and malnutrition, leading to illness in pregnant women and children. In pregnant women, hookworm disease is associated with increased risks for death and poor neonatal outcomes, including low birthweight and increased deaths in infants. In children, substantial impacts on physical and intellectual development occur (2,3). Currently, Necator americanus and Ancylostoma duodenale hookworms are believed to be the main causative agents of hookworm disease globally.
Recently, A. ceylanicum hookworm infection was described in a soldier from Australia who had returned from the Regional Assistance Mission to the Solomon Islands, a peacekeeping mission (4). Until the past decade, human infection with A. ceylanicum was considered to be a rare zoonotic disease. However, several recent studies have found this species to be far more prevalent than previously reported, and it is now recognized as the second most common hookworm infection of humans in parts of Asia (5). The prevalence of this species in the Pacific Islands, and specifically in Melanesia, remains unexplored.
Isolated case reports of A. ceylanicum infection from the Pacific Islands were made in the early to mid-20th century. In 1929, A. ceylanicum infection was diagnosed in a 5-year-old child from Europe returning from long-term residence in the Shortland Islands (an island group in the north of the Solomon Islands) (6). Infection with A. brazilense (at that time synonymous with A. ceylanicum) was also described in 2 soldiers from Australia returning from service in Papua New Guinea during World War II (7) and in 9 servicemen from the Netherlands who had returned from West New Guinea in the early 1960s (8). A. braziliense and A. ceylanicum have similar morphologic features, with minor distinguishing points, but are distinct taxa (9). To our knowledge, A. ceylanicum infection has not been reported in the other Melanesian islands of Vanuatu or New Caledonia. Until the report of Speare et al. (4), no further human cases of A. ceylanicum infection were reported from the Solomon Islands or from any other Pacific Islands. In Australia, 2 autochthonous human infections of A. ceylanicum infection have been described (10).
In response to the case report of Speare et al. (4), we determined the species of hookworms, and, specifically, the prevalence of human A. ceylanicum infections, in the Solomon Islands, a group of islands southeast of Papua New Guinea and northeast of Australia, located within the Melanesian archipelago. Five soil-transmitted helminth (STH) surveys in this nation have been published (11–15). This survey aimed to determine the species of hookworm infecting communities in the remote East Malaita region of the province of Malaita.

East Malaita is on the east coast of the island of Malaita in the Solomon Islands. The region has a wet equatorial tropical environment, with high rainfall. The average temperature is 27°C, and the weather is humid and hot at all times of the year. Two STH surveys, one in December 2013 and one in August 2014, were conducted in 2 villages of the province. Village 1 (Na’au) is on the mainland of Malaita, 0.95 km southeast of the major East Kwaio village of Atoifi (coordinates 8°52.729ʹS, 161°0.772ʹE). The village has a population of 195 persons and an average age of 30.1 years (median 28 years); 48.0% of the total population is female. Village group 2 (Kwai and Ngongosila) is found in adjacent coral atolls off the coast of East Malaita, 12.3 km north of Atoifi. Ngongosila is 0.83 km off the coast and Kwai is 0.55 km east of Ngongosila. At low tide, a land bridge is formed between the 2 islands. Kwai Island (8°46.20ʹS, 168°56.50ʹE) has a population of 458 persons, and Ngongosila (8°46.37ʹS, 168°56.28ʹE) has a population of 357 persons. The average age in village group 2 is 23.7 years (median 18 years), and 49.6% of the total population is female. All persons living in these villages are ethnic Malaitan Solomon Islanders. Although a small number of children and adults leave the villages to go to high school in larger population centers, most remain in their home village, to the extent that there is no underrepresentation of specific age groups in the village.

Initial discussions with village leaders and key members of the community were begun up to 12 months before the studies were performed. In the months prior to each study, discussions were held with the community. Community wide gatherings for leading to participant recruitment were held on December 14, 2013 for village 1 and on August 8, 2014 for village group 2. All residents were invited to participate. A census of residents was conducted before the survey to determine the number of persons and families on each island. Each person was assigned a code to preserve anonymity, and written informed consent was received from each participant or a parent or guardian. Each consenting person was provided with collection containers marked only with the participant code. Containers of fecal samples were left by the participants at the communal toilets in each village and were collected twice a day by the researchers.

The presence of infecting STH was determined on the day of specimen collection by using a single Kato-Katz analysis (16). Kato-Katz slides were read within 1 hour and 30 minutes and at 4 hours after preparation. Samples positive for hookworms on Kato-Katz analysis were stored for later PCR analysis to determine the species of hookworm involved. Single fecal samples from egg-positive persons were preserved in 100% ethanol in a ratio of 1:1 and stored at room temperature until DNA extraction could be performed.

Ethanol-preserved samples were rehydrated by being centrifuged at 500 × g; the ethanol supernatant was removed and replaced with sterile distilled, deionized water and incubated at 4°C overnight. DNA was then extracted with the Powersoil Kit (Mo Bio, Carlsbad, CA, USA), according to the manufacturer’s instructions. Extracted DNA was stored at −80°C until PCR was performed.
A previously published multiplex conventional PCR targeting the internal transcribed spacer region (ITS) 1, 5.8S, and ITS2 region of Necator americanus and Ancylostoma spp. was performed (17). We submitted PCR products of 380 bp corresponding to Ancylostoma spp. to Macrogen, Inc. (Seoul, South Korea), for purification and bidirectional DNA sequencing. We subjected samples that were positive for A. ceylanicum to a second published conventional PCR, targeting a 377-bp region of the cox-1 gene of A. ceylanicum for haplotype characterization (18).
We analyzed DNA sequences by using Finch TV version 1.4.0 (Geospiza, Inc., Billerica, MA, USA) and aligned them with BioEdit version 7.2.5 (http://www.mbio.ncsu.edu/bioedit/page2.html) with the cox-1 gene from A. ceylanicum Malaysia isolates (GenBank accession nos. KC247728/30/31/34/36/39/40/42–45, Pos Iskandar [Human], and Sg Bumbun [Human]); Cambodia isolates (GenBank accession nos. KF896595/97 and KF896600–KF896605);, and southern China isolates (GenBank accession nos. KP072071, KP072074, KP072080); A. duodenale (GenBank accession no. NC003415) and A. caninum (GenBank accession no. NC012309) isolates were also included in the analysis. We inferred the evolutionary history by the neighbor-joining method and computed evolutionary distances with the maximum composite likelihood method by base substitutions per site. The analysis involved 37 nt sequences. Codon positions included were 1st + 2nd + 3rd + noncoding. All positions containing gaps and missing data were eliminated. The final data set had 296 positions. We conducted evolutionary analyses in MEGA6 (http://www.megasoftware.net/).

We performed statistical analysis in Excel (Microsoft, Redmond, WA, USA) using the Student t-test (2-tailed) for comparison of the age of infected participants by the infecting species of hookworm. We used the χ2 test for gender but the Fisher exact test was used for source village and correlation to co-infection with other STH because the numbers were insufficient for a valid χ2 analysis. We considered any p value <0.05 to be significant.

A total of 65 fecal samples (33% participation rate) were received from village 1 and 576 fecal samples (71% participation rate) were received from village group 2. The prevalence of hookworms in village 1 and village group 2, according to the results of the Kato-Katz analysis, was 47.7% (31/65) and 24.1% (139/576), respectively.
The species of hookworm in 66 hookworm-positive samples was determined by multiplex ITS1, 5.8S, and ITS2 region PCR. Most samples, 81.8% (54/66), contained only N. americanus hookworm; 16.7% (11/66) contained only A. ceylanicum hookworm, and 1 sample (1.5%) contained a mixed infection with both N. americanus and A. ceylanicum hookworms. The species of hookworm infecting these persons had no major effect on the likelihood of infection with other STH; furthermore, we noted no association of age, sex, or village to a specific hookworm species (Table). 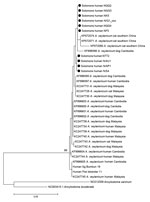 Figure. Phylogenetic tree obtained from neighbor-joining analysis of cytochrome oxidase 1 gene amplicons (296 bp) of Ancylostoma ceylanicum hookworms sourced from 10 humans in the eastern Solomon Islands (black circles) compared with...
Of the 12 A. ceylanicum hookworm–positive samples, we successfully amplified the cox-1 gene for 10. Haplotype analysis of cox-1 sequences placed all human isolates (99% bootstrap support) within the clade comprising a mix of A. ceylanicum isolates sourced from humans, dogs, and cats in Malaysia, China, and Cambodia, as opposed to the clade comprising human-only isolates of A. ceylanicum (Figure).

We acknowledge the assistance of Janani Jayanthan for undertaking the DNA extraction of samples, as well as the staff of Atoifi Adventist Hospital and the people of East Malaita for their kindness and assistance in the conduct of this study.
This study received financial support from Tropical Diseases Research, World Health Organization, short-term training grants for research capacity strengthening and knowledge management awarded to Atoifi Adventist Hospital, Solomon Islands.
This article is dedicated to the memory of our co-author, Emeritus Professor Richard Speare. Rick’s kindness, tireless work, and dedication to others leaves a profound legacy and testament to a great man in the fields of parasitology, zoonotic disease, and public health.