About the Division of Vector-Borne Diseases

Vector-Borne Threats and What We Do About Them

Read our two-page brochure about what we do, where we do it, and why. 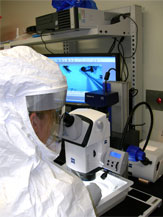 A CDC scientist examines mosquitoes using a stereoscopic microscope to identify the species while working in a BSL-3 lab at Fort Collins, Colorado.
Vector-borne diseases are among the most complex of all infectious diseases to prevent and control. Not only is it difficult to predict the habits of mosquitoes, ticks and fleas, but most vector-borne viruses or bacteria infect animals as well as humans. West Nile virus (WNV), which is primarily a disease of birds, is a good example.
Vector-borne diseases are major public health concern. Lyme Disease causes over 300,000 estimated human illnesses annually in the U.S. Tick-borne rickettsial diseases, such as Rocky Mountain spotted fever (RMSF), ehrlichiosis, and anaplasmosis, are responsible for over 4,000 U.S. cases each year, including some that result in death. Dengue fever causes millions of cases worldwide, including thousands of cases in Puerto Rico each year. DVBD uses information about the number of cases, and when and where they occur, to aid health departments and other partners to reduce cases, save lives, reduce suffering, and reduce the financial impact to the public.
We also cover less common, but often deadly threats. Yersinia pestis causes the ancient disease plague. Focal plague outbreaks occur in the southwestern U.S., and it is a significant health threat in Africa and Asia. We work with public health officials in Uganda to improve diagnosis, treatment and prevention—learning lessons that could help us respond to natural and bioterrorist uses of plague.

The Division of Vector-Borne Diseases (DVBD) is a national and international leader in the prevention and control of infections by vector-borne viruses and bacteria. Our strength is a uniquely skilled staff that includes physicians, veterinarians, entomologists, zoologists, epidemiologists, molecular biologists, and laboratory diagnosticians who aid state and U.S. territory health departments as well as international partners.
DVBD research focuses on prevention and control strategies that can reach the targeted disease or vector at multiple levels while being mindful of cost, acceptability, and the world’s ecology.
DVBD includes four branches, as well as the Office of the Director (Fort Collins, CO):

Guidelines for Arbovirus Surveillance in the United States