By Dr. Ananya Mandal, MDApr 28 2019
A new study has reinforced the belief that work related stress and impaired sleep could be directly associated with raised blood pressure and risk of death due to heart disease. The results of the study titled, “Combined effect of work stress and impaired sleep on coronary and cardiovascular mortality in hypertensive workers: The MONICA/KORA cohort study,” were published in the European Journal of Preventive Cardiology - a journal of the European Society of Cardiology (ESC). 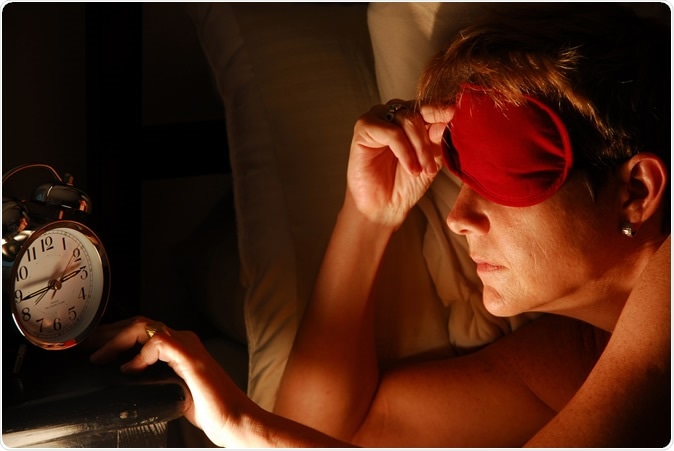 Work stress and poor sleep associated with heart disease . Image Credit: Karen Winton / Shutterstock
The researchers explain that among employees with high blood pressure the risk of death due to heart disease rose three-fold if there was workplace stress and impaired sleep added to the soup of risk factors. According to Professor Karl-Heinz Ladwig, of the German Research Centre for Environmental Health and the Medical Faculty, Technical University of Munich, who was part of the study, “Sleep should be a time for recreation, unwinding, and restoring energy levels. If you have stress at work, sleep helps you recover. Unfortunately poor sleep and job stress often go hand in hand, and when combined with hypertension the effect is even more toxic.”
The study reveals that high blood pressure or hypertension is seen in one in three persons who are working. This study is the first that looks at the association of a combination of factors such as high blood pressure, work stress and impaired sleep and risk of dying due to heart disease. The team included 1,959 hypertensive workers aged 25-65 years of age. These participants at the outset did not have diabetes or any heart disease. The participants were followed up for an average of 18 years. During this time were 134 deaths due to cardiovascular disease and 73 events due to coronary heart disease.
Results revealed that compared to persons who had no work stress and slept well on most nights, those who were stressed and did not sleep well had a three times greater risk of dying due to heart disease. Those who had work stress but did not have sleep problems had a 1.6 times greater risk and those who had no work stress and only poor sleep had a 1.8 times greater risk of dying due to heart disease compared to those who did not have either risk factors, explained the researchers. Employees who had both work stress and well as poor sleep had an absolute risk of 7.13 per 1,000 person-years. This was comparable to 3.05 per 1,000-person years in those with no stress and good sleep. The absolute risk of those with work stress was 4.99 per 1000 person-years and those with poor sleep were 5.95 per 1000 person years. Over the nearly two decades of follow up, the risk of dying due to heart disease rose in a step wise manner among those with high blood pressure.
The authors of the study include high demand jobs with low control as jobs with high work stress. Professor Ladwing explained, “. If you have high demands but also high control, in other words you can make decisions, this may even be positive for health. But being entrapped in a pressured situation that you have no power to change is harmful.” Poor sleep was defined in the study as difficulty in initiation of sleep and/or maintenance of sleep. He explained, “Maintaining sleep is the most common problem in people with stressful jobs. They wake up at 4 o'clock in the morning to go to the toilet and come back to bed ruminating about how to deal with work issues.”
Professor Ladwig explains the results saying, “These are insidious problems. The risk is not having one tough day and no sleep. It is suffering from a stressful job and poor sleep over many years, which fade energy resources and may lead to an early grave.” He added that these findings should serve as warnings. He said, “Each condition is a risk factor on its own and there is cross-talk among them, meaning each one increases risk of the other. Physical activity, eating healthily and relaxation strategies are important, as well as blood pressure lowering medication if appropriate.”
The authors of the study suggest strategies for stress management at work place and better sleep training and practices. This should be especially in place for employees with hypertension, they wrote saying, “Future interventions in the workplace to promote cardiovascular health, that is, stress management and sleep treatment, should be considered, especially among workers with chronic conditions, such as hypertension.”

Similar studies that looked at stress and heart disease

Dr Marianna Virtanen from the Stress Research Institute, Stockholm University, Stockholm, Sweden and colleagues recently looked at the effects of long hours of work of different parameters of health such as weight, lung function, blood pressure and other blood tests results. Theirs was a part of the large CONSTANCES study.

The study titled, “Long working hours, anthropometry, lung function, blood pressure and blood-based biomarkers: cross-sectional findings from the CONSTANCES study,” was published in February this year in the Journal of Epidemiology and Community Health.
The study involved 75,709 participants aged 18-69 at the start of the study between 2012 and 2016. The participants were included from 22 health centres across France. Work hours and work stress as well as other health parameters were recorded for the study and the participants were followed up.
Over the duration of the study the researchers noted that among men, work stress caused rise in body weight, waist circumference, waist:hip ratio, Body Mass Index (BMI). Work stress and long working hours in men was also associated with raised blood lipid levels, raised levels of glucose and creatinine, liver enzyme Alanine transaminase (ALT) and number of white blood cells. Among women there was a significant rise in body mass index and white blood cells associated with long working hours.
The authors concluded that work stress and long working hours were associated with adverse heart disease risk factors especially among men when compared to those who did not have long gruelling working hours.
In other related research Prof Mika Kivimäki from the Department of Epidemiology and Public Health, University College London, and colleagues performed a multicohort study recently looking at the risk of death due to work stress. They compared persons with and without heart disease.
The study titled, “Work stress and risk of death in men and women with and without cardiometabolic disease: a multicohort study,” was recently published in the Lancet Diabetes Endocrinology (September 2018).
The team used data and information from seven cohort studies in the IPD-Work consortium. These studies had started between 1985 and 2002 in Finland, France, Sweden, and the UK. Their aim was to look at association of work related stress and risk of death. A total of 1,02,633 individuals with 14,23,753 person-years at risk were identified and followed up for an average of around 14 years.
The authors of the study denoted work stress as “job strain or effort-reward imbalance at work.” They looked at incidence of main heart disease and metabolic outcomes such as “coronary heart disease, stroke, or diabetes.” They included other parameters in their analysis including body mass index, physical activity, smoking and alcohol consumption status, blood pressure and total cholesterol. These were assessed at baseline and also by end of the follow up.
By end of the follow up there were 3441 individuals with heart or metabolic diseases at the start of the study and 3841 who had died during follow up. The risk of heart disease was greater among men with high job stress, the researchers found (149·8 per 10 000 person-years) compared to men with no or little job stress (97·7 per 10 000 person-years). Difference in risk of death was 52·1 per 10 000 person-years among those with and without job stress.
The difference rose when there were added risk factors such as smoking, high blood pressure, high cholesterol, obesity, lack of physical activity and excess alcohol consumption. The risks were less pronounced among women employees, the study noted (mortality difference 6·6 per 10 000 person-years).
The authors concluded, “In men with cardiometabolic disease, the contribution of job strain to risk of death was clinically significant and independent of conventional risk factors and their treatment, and measured lifestyle factors. Standard care targeting conventional risk factors is therefore unlikely to mitigate the mortality risk associated with job strain in this population.”
The study was funded by NordForsk, UK Medical Research Council, and Academy of Finland.
Publicado por salud equitativa en 9:34