By Sally Robertson, B.Sc.Apr 30 2019Reviewed by Kate Anderton, B.Sc. (Editor)
A new study by researchers at the University of Adelaide has found that time-restricted eating (also known as intermittent fasting), may help to regulate blood glucose levels among people who are at risk of type 2 diabetes. Fasting was shown to improve glycemic (blood sugar) responses in men with a high risk of developing diabetes, irrespective of how much food they ate. 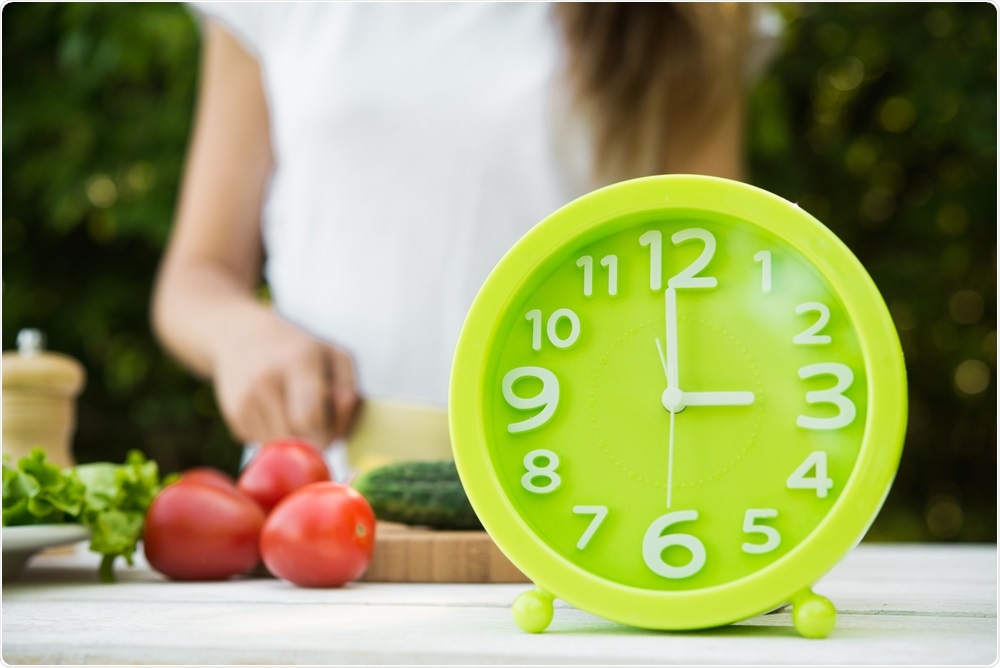 Dima Sobko | Shutterstock
Most people following this diet abstain from food for 16 hours of the day and eat within an 8 hour time period. The theory is that longer fasting periods increase the body’s ability to deal with larger volumes of food.
Time-restricted eating is a popular diet trend that involves intermittent fasting. The theory behind time-restricted eating is that people can enjoy foods usually thought of as unhealthy, providing they consume them at within a specific time period in the day.

Time-restricted eating regimes demonstrate that we can enjoy foods that are perceived to be ‘bad’ for us if we allow our bodies to have more time fasting each night.”
Leonie Heilbronn, Lead Author

Putting intermittent fasting to the test

As reported in the journal Obesity, the team analyzed the effects or time-restricted eating among 15 at-risk men (aged an average of 55 years) over the course of two seven-day test periods. The men followed their usual diet but limited their daily food intake to a nine-hour time period – either eating between 8.00am and 5.00pm for a week or between noon and 9.00pm for a week.
All participants wore a continuous glucose monitor and were assessed for glucose tolerance following a standard meal at the start and end of the experiment.
The researchers report that time-restricted eating improved glucose control, irrespective of when the men chose to stop eating.

Our results suggest that modulating when, rather than what, we eat can improve glucose control. We did see a tiny amount of weight loss in this study, which may have contributed to the results.”
Leonie Heilbronn, Lead Author

One of the study participants was Fred Rochler, who followed his usual diet between 9:30am and 7:30pm over the course of eight weeks.
"The restricted eating regime was initially challenging, but soon became more manageable. I only ate up until 7.30pm as I found this worked well with my lifestyle. Over the trial, I found that my fasting blood glucose tolerance improved significantly. It changed from 'increased risk' level to 'normal'. This was without changing any of the foods that I like to eat," said Fred.
Helibronn notes that the findings would need to be replicated in studies involving more participants and conducted over a longer period of time before any conclusions can be drawn.
"While these early results show some promise for controlling blood glucose, a larger study over a longer duration is required to fully investigate the effectiveness of this pattern of time-restricted eating," she concludes.
Publicado por salud equitativa en 9:35