By Dr. Ananya Mandal, MDApr 29 2019
People suffering from chronic fatigue syndrome (CFS) have been up until now treated with scepticism at best. Their symptoms have been negated as vague and their debilitating condition has not received the status of being proven in a test. No more now!
Researchers from Stanford University School of Medicine have devised a blood based test that can accurately identify blood biomarkers that determine that a person is suffering from this condition. This provides a scientific proof that the disease does exist.
Lead author and researcher Ron Davis, a professor of biochemistry and of genetics said in a statement, “Too often, this disease is categorized as imaginary.” On visits to the doctor the patient is usually prescribed a battery of tests for the liver, kidney and heart, blood and immune cells. He explained, “All these different tests would normally guide the doctor toward one illness or another, but for chronic fatigue syndrome patients, the results all come back normal.” 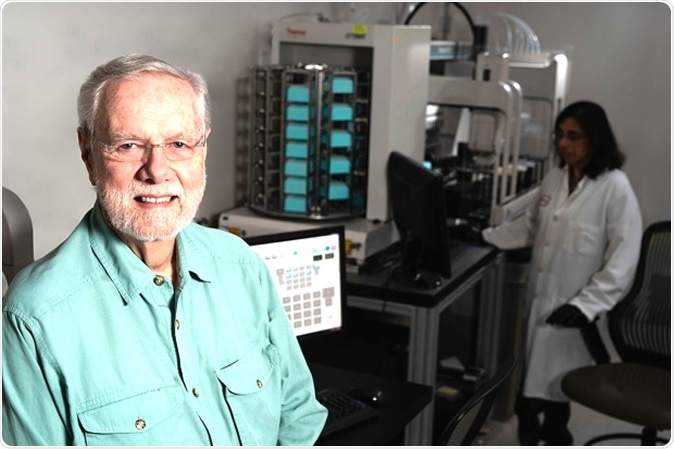 Ron Davis is the senior author of a paper that describes a blood test that may be able to identify chronic fatigue syndrome. Image Credit: Steve Fisch
In their endeavours, Davis and Rahim Esfandyarpour, a former Stanford research associate and now faculty at University of California-Irvine, along with others have devised a blood based test to detect CFS. The test basically looks at the response of the immune cells to stress. The team in their pilot study took blood samples of 40 people. Of these 20 were diagnosed to be suffering from CFS based on their symptoms. The tests results could accurately pinpoint all the cases of CFS and did not make a diagnosis in any of the healthy persons.
The researchers hope that this test could soon be modified and studied in depth to develop drugs to treat the condition as well. The team is using similar principles to look for drugs that could potentially help people with this condition. The study titled “A nanoelectronics-blood-based diagnostic biomarker for myalgic encephalomyelitis/chronic fatigue syndrome (ME/CFS),” described the study findings and the results were published in the journal Proceedings of National Academy of Sciences.

Typically CFS is diagnosed on the basis of symptoms. There is extreme exhaustion, unexplained pain, sensitivity to light, fever, irritable bowel syndrome, lymph node swelling, sleep problems, problems of cognition etc. the problems are seen in the gastrointestinal system, immune system, hormone system, heart and the brain. All other disease conditions need to be ruled out before CFS is formally diagnosed. CFS is also called myalgic encephalomyelitis and can be called ME/CFS. In the United States alone there are over 2 million people who are diagnosed with CFS says Davis. Davis says that his own son suffers from the condition for over a decade and their study was an effort to help people like his son.
For their test the team used a “nanoelectronic assay.” When the healthy plasma cells and immune cells are subjected to stress, there are minimal changes in energy. The devise sends in thousands of tiny currents into the plasma samples causing the immune cells to respond and react. The reactions of cells from CFS patients are different from those of healthy persons. The device is accurate enough to pick up these nano-signals and correlate it with the health of the sample. The bigger the electrical signals sent out from the cells – more is the change at a cellular level explain the researchers. They add that this means that the cells are “flailing” under stress and are not able to process the stress adequately. The spikes were clearly seen in the results of the samples from CFS patients compared to those from healthy controls. The team used “supervised machine learning algorithms” or artificial intelligence technology to rapidly detect these spikes. This made the test reliable as well as accurate.

Davis said, “We don’t know exactly why the cells and plasma are acting this way, or even what they’re doing. But there is scientific evidence that this disease is not a fabrication of a patient’s mind. We clearly see a difference in the way healthy and chronic fatigue syndrome immune cells process stress.” The team is now recruiting more number of patients to expand their pilot study and to see if it works in large populations accurately.
Esfandyarpour said, “Using the nanoelectronics assay, we can add controlled doses of many different potentially therapeutic drugs to the patient’s blood samples and run the diagnostic test again.” Thus he explained how they could use their nanotechnology based test to also screen for potential drugs to treat CFS. If the drugs worked, then they probably would reduce the spikes on the test he said. At present they have found a drug that could help restore healthy functions of the immune cells and the plasma. They hope that soon the drug could be tried on human patients in clinical trials wherein its benefits could be proved. The drug in question currently is approved by the Food and Drug Administration (FDA), they add.
The study received funds from the Open Medicine Foundation.

A few years back researchers F. Ciregia and colleagues from University of Pisa, Leibniz-Institut für Analytische Wissenschaften, Germany, Università Cattolica, Rome, University of Aberdeen, IRCCS-Fondazione Santa Lucia, Rome and more collaborated to find mitochondrial changes that could help detect CFS.
Their study titled, “Bottom-up proteomics suggests an association between differential expression of mitochondrial proteins and chronic fatigue syndrome,” was published in the journal Translational Psychiatry back in 2016.
The team looked at the cellular structures of a pair of twins’ saliva samples. They studied their mitochondrial proteins. Using “Nano-liquid chromatography electrospray ionization mass spectrometry (nano-LC-MS)” they studied the mitochondria that came from the platelets of the blood samples of the twins. They selected 3 proteins from the samples and correlated it with saliva samples from 45 healthy controls and 45 patients with CFS. The three proteins were “aconitate hydratase (ACON), ATP synthase subunit beta (ATPB) and malate dehydrogenase (MDHM)”.
Results revealed that there was a rise in the ATPB and ACON proteins in patients with CFS. Authors conclude, “these results suggest that our potential markers could be one of the criteria to be taken into account for helping in diagnosis.” They also hoped that this test would help develop tailored treatments for patients with CFS.

In a more recent study by Dorottya Nagy-Szakal from Center for Infection and Immunity, Columbia University Mailman School of Public Health, New York and colleagues studied markers for CFS. Their study titled “Insights into myalgic encephalomyelitis/chronic fatigue syndrome phenotypes through comprehensive metabolomics,” was published in July 2018 in the journal Nature Scientific Reports.
The team discovered biomarkers from plasma as well as stool that could help detect CFS. They included 50 CFS patients and 50 healthy controls in their study. Their study showed that there was altered levels of “choline, carnitine and complex lipid metabolites.” Patients with CFS tended to have raised levels of plasma ceramide, they wrote.
The authors hoped that from their study diagnostic tests could be devised for patients with CFS by detection of these biomarkers from stool and plasma samples and in future treatments could be strategized as well.