By Dr. Ananya Mandal, MDApr 26 2019
Weight watchers worldwide need to not only be careful about what to eat but also about the timing of the food intake finds a new study. The study is published in the latest issue of the journal Cell and is titled, “Insulin/IGF-1 drives PERIOD synthesis to entrain circadian rhythms with feeding time”. The research finds that late night meals may desynchronize the body clock. The study was funded by the Medical Research Council (MRC). 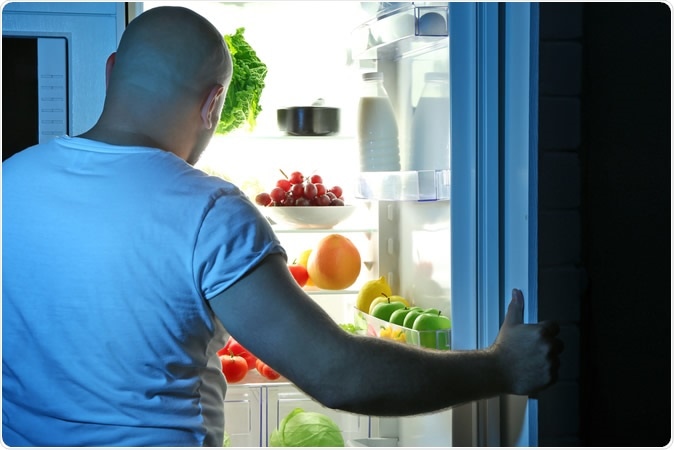 Image Credit: Africa Studio / Shutterstock
Researchers from the University of Manchester, for their study looked at cultured cells as well as mice for their experiments. They explain that food triggers the release of insulin from the pancreas to help the body use the sugar intake in the food. When food is taken at a different time the insulin release is also seen at a “wrong” time. This can throw the body clock into a tizzy and affect weight loss and gain say the researchers.
Dr David Bechtold, a senior lecturer at the university and one of the study authors said in a statement, “We already know that modern society poses many challenges to our health and well-being - things that are viewed as commonplace, such as shift-work, sleep deprivation, and jet lag, disrupt our body clock. It is now becoming clear that circadian disruption is increasing the incidence and severity of many diseases, including cardiovascular disease and type 2 diabetes.”
The team explains that the advent of electricity has allowed humans to work round the clock and thus the circadian rhythm can be disrupted. They add that the stress hormone of the body cortisol can peak around 8 AM and this can help wake a person. It falls to its lowest limit at around 3AM. Sunlight usually triggers the peak rise of the cortisol rather than the alarm. By mid morning, explain the researchers, the levels of cortisol start to lower while adrenaline and serotonin levels start to rise. This elevates level of energy and mood. The adrenaline leads to feeling of hunger and prompts a person to eat. As the levels of cortisol start to drop, there is tiredness by afternoon. Now the serotonin in the body turns into melatonin and this can make one feel sleepy. The levels of blood sugar also decline to the minimum at around 3AM when the cortisol levels are low. This balance can be disrupted if there are late night snacking or eating at other times than normal say researchers. The effects can be seen on the digestion, sugar levels, skin, stress levels etc.
The new study finds that insulin hormone as well as Insulin Like Growth Factor – 1 (IGF-1) can synchronize with the circadian rhythms. As they are released, they increase the levels of certain proteins called the “PERIOD clock proteins”. In their experiments, when they altered the timing of insulin release, there was an alteration in the circadian rhythm find the researchers. They noted that this disruption led to alteration in the behaviour of the mice and also altered their body clocks and genetic expression.
The team working from the MRC Laboratory of Molecular Biology (LMB) in Cambridge and the University of Manchester initially saw the effects on cultured cells and then repeated the effects on mice. In the mice they fed them at odd hours of the day when the mice were resting. This led to disruption of their natural circadian rhythms.
Dr John O'Neill, research leader at the MRC LMB in Cambridge explained, “At the heart of these cellular clocks is a complex set of molecules whose interaction provides precise 24-hour timing. What we have shown here is that insulin, released when we eat, can act as a timing signal to cells throughout our body.” Sunlight as well as food can act as signals to the body clock he explained. Dr Priya Crosby, a postdoctoral scientist at UC Santa Cruz and first author of the study added in explanation, “Our data suggests that eating at the wrong times could have a major impact on our circadian rhythms. There is still work to do here, but paying particular attention to meal timing and light exposure is likely the best way to mitigate the adverse effects of shift work. Even for those who work more traditional hours, being careful about when we eat is an important way to help maintain healthy body clocks, especially as we age.”

Other recent studies that have explored the effects of irregular food intake time and health effects
Authors A. Paoli and colleagues from the Department of Biomedical Sciences, University of Padova, Italy, collaborated with researchers in Texas to find the role of fasting and meal timings on health. Their study titled, “The Influence of Meal Frequency and Timing on Health in Humans: The Role of Fasting,” was published last month in the journal Nutrients.
The team looked at evidence that compared high meal frequency (six or more meals per day) with low meal frequency ( 1 to 2 meals a day) and found that the former was more harmful for health. They explain that the main factor here was the time period between two meals. They concluded from their findings that health benefits could be obtained from;
They add that these measures can provide, “physiological benefits such as reduced inflammation, improved circadian rhythmicity,” and also “stress resistance, and modulation of the gut microbiota.”
In another study the researchers led by S. Viela from Universidade do Porto from Portugal looked at food timing in a day and effects on childhood obesity. They used the term “chrono-nutrition” to describe the effects of food timing on the circadian rhythm. Their study titled “Chrono-Nutrition: The Relationship between Time-of-Day Energy and Macronutrient Intake and Children's Body Weight Status,” was published in last month in the J Biol Rhythms.
The authors looked at effects of macronutrient intake in four year old children after following them up until they were 7 years of age. A total of 1961 children were included in the study from the Generation XXI study data. Food diaries were obtained for the 4 year old children and weight was measured at 7 years of age.
Results showed that higher energy intake at lunch and supper at the age of four was associated with being overweight or obese at the age of 7 years. There was also a risk of obesity and weight gain among children who skipped breakfast or ate their first meal late in the day. This link was independent of the child’s eating behaviour or appetite.
Back in Dec 2018 Japanese researcher, J Yoshida and colleagues from Department of Public Health, Okayama University Graduate School of Medicine, Dentistry and Pharmaceutical Sciences, Japan, studied the effects of late night snacking on metabolic syndrome. Their study titled, “Association of night eating habits with metabolic syndrome and its components: a longitudinal study,” was published in the latest issue of the journal BMC Public Health.
They looked at the effects of a dinner immediately before bed and/or having snacks after dinner on obesity and metabolic syndrome risk. Their study population consisted of 8153 adults aged between 40 and 54 years. Their results showed that snacking at night was associated with metabolic syndrome in women. Metabolic syndrome comprises of type 2 diabetes, high blood pressure, obesity and raised blood cholesterol. Night snacking was associated with raised blood cholesterol in both men and women, the researchers found.
Publicado por salud equitativa en 9:35