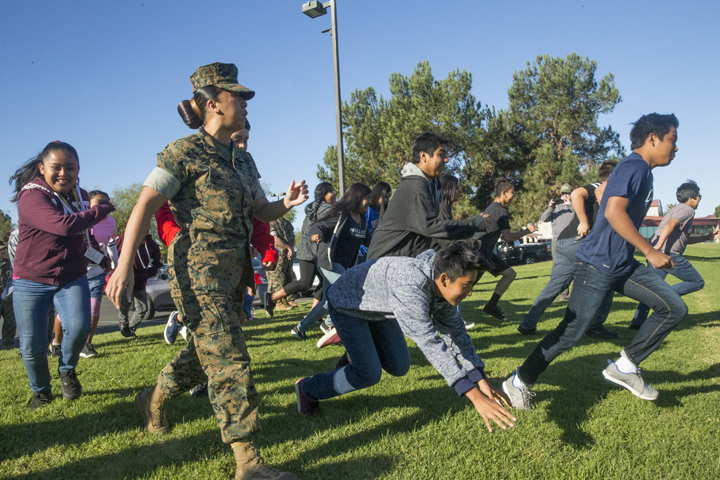 
Donna, the mother of three children, kept hearing about a vaccine that health care experts recommend for preteens and teens. With her own twins approaching middle-school age, she wanted to learn more. So she did some research on the vaccine for human papillomavirus, or HPV.
Donna discovered the HPV vaccine is safe and has few, if any, mild side effects. It's most effective for adolescents before they're exposed to the virus. Most significantly, Donna learned the vaccine is almost 100 percent effective in preventing HPV infections, which eventually may cause several types of cancer.
Armed with this knowledge, Donna got her twins vaccinated at their local military treatment facility. She said she'll also ensure her youngest child receives the vaccine in a few years, as recommended.
"This wasn't a difficult decision for me at all," said Donna, whose real name is not being used to protect her family's privacy. "The HPV vaccine is part of preventive health care."
HPV is very common, according to the Centers for Disease Control and Prevention. Approximately 79 million Americans have at least one of about 120 different HPV strains. The virus spreads through intimate, skin-on-skin contact.
Nearly 14 million new cases of HPV infection occur every year, with about half of all new infections among 15- to 24-year-olds, said Dr. Bruce McClenathan, the medical director of the Defense Health Agency Immunization Health Care Branch's South Atlantic Region Vaccine Safety Hub, Fort Bragg, North Carolina.
“HPV can cause many different types of cancer," said Air Force Lt. Col. Ruth Brenner, deputy chief of the DHA's Immunization Health Care Branch. “For successful cancer prevention, people need to receive the vaccine before they’re exposed to the virus.”
McClenathan said studies have shown the vaccine caused HPV infection rates to decline 64 percent among teenaged girls ages 14 to 19, and 34 percent among women ages 20 to 24.
Usually, people don't exhibit any signs or symptoms of an HPV infection, according to the CDC. Also, most don’t develop health problems related to HPV, and the virus typically goes away on its own after a couple of years.
But there’s no way to predict who will clear the virus and who won’t, McClenathan said. If an HPV infection persists, it eventually may cause genital warts – and worse. Almost all cervical cancer is HPV-related, he said.
“At least we have the Pap smear as a good test for cervical cancer,” McClenathan said. “With other HPV-related cancers, there really aren’t any good screening tests.”
About 90 percent of all anal cancers, 72 percent of all throat cancers, and 1 percent of all vaginal and vulvar cancers are also linked to HPV, he said. So are about 71 percent of penile cancers.
“The HPV vaccine is a very effective cancer-preventing vaccine," McClenathan said. “Widespread vaccination for HPV would have huge potential to reduce many types of cancer.”
Only one HPV vaccine, Gardasil 9, currently is used, McClenathan said. The vaccine is recommended for girls and boys as young as age 9, and women and men up to age 26. Recently, the Food and Drug Administration approved expansion of the vaccine to adults up to age 45, McClenathan said.
For HPV vaccination of service members, the Department of Defense follows guidelines published by the Advisory Committee on Immunization Practices.
“Medical providers should have frank discussions with their patients about whether this vaccine is appropriate for them,” Brenner said.
TRICARE covers the HPV vaccine as recommended by the CDC. More information about the HPV vaccine can be found here.

The pediatric clinic’s objective is to care for children from birth to the age of 18
Recommended Content:
Children's Health | Military Hospitals and Clinics

With the increasing number of testosterone deficiency diagnoses and potential health risks associated with initiation of TRT, it is important to understand the epidemiology of which U.S. service men are receiving TRT and whether these individuals have an indication for receiving treatment.
Recommended Content:
Health Readiness | Armed Forces Health Surveillance Branch | Epidemiology and Analysis | Medical Surveillance Monthly Report | Public Health

There are few published studies of vasectomy and vasectomy reversal among the U.S. military population. To address these gaps, the current analysis describes the overall and annual incidence rates of vasectomy among active component service men during 2000–2017 by demographic and military characteristics and by type of surgical vas isolation procedure used. In addition, the median age at incident vasectomy and the time between incident vasectomy and first vasectomy reversal are described.
Recommended Content:
Health Readiness | Armed Forces Health Surveillance Branch | Epidemiology and Analysis | Medical Surveillance Monthly Report | Public Health