Just 5 Percent of Daily Salt Gets Added at the Table: MedlinePlus Health News

Just 5 Percent of Daily Salt Gets Added at the Table: MedlinePlus Health News

Just 5 Percent of Daily Salt Gets Added at the Table 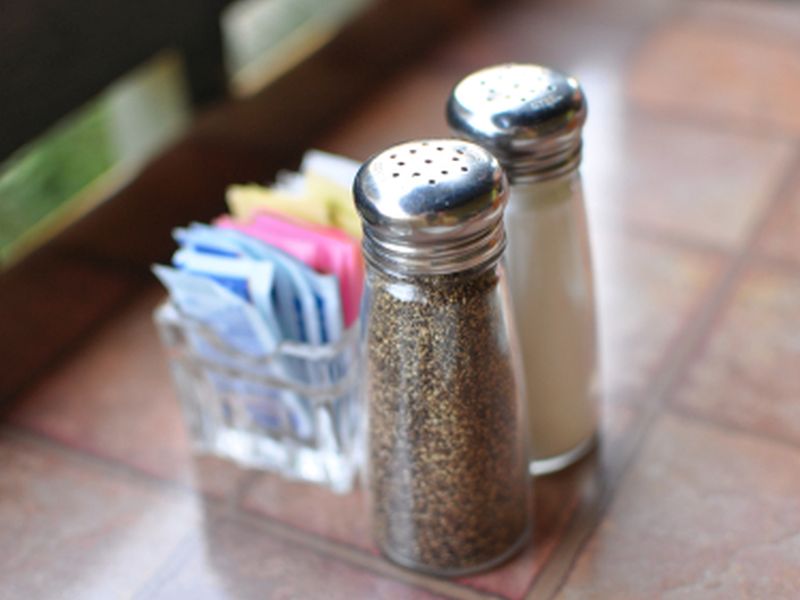 MONDAY, May 8, 2017 (HealthDay News) -- Tossing out the salt shaker may not be enough for your heart health. Most of the salt that Americans consume comes from processed foods and restaurant meals, a new study finds.
In a sampling of 450 U.S. adults, only 10 percent of salt, or sodium, in their diet came from food prepared at home. About half of that was added at the table.
Instead, restaurant meals and store-bought foods -- including crackers, breads and soups -- accounted for 71 percent of salt intake, the study found.
"Care must be taken when food shopping and eating out to steer clear of higher-sodium foods," said lead researcher Lisa Harnack.
For prevent harmful high blood pressure, Americans are advised to limit salt intake to 2,300 milligrams (mg) daily, said Harnack, a professor at the University of Minnesota School of Public Health. That's the equivalent of one teaspoon.
But, more than eight out of 10 Americans exceed this limit "by a mile," she said.
Food diaries from study participants showed that about 3,500 mg of sodium was consumed a day on average.
The report was published online May 8 in the journal Circulation.
Kathryn Foti, an epidemiologist who wasn't involved in the study, pointed out that high blood pressure is a leading cause of heart disease and stroke in the United States.
"Reducing salt reduces blood pressure and can help prevent cardiovascular disease," said Foti, of the Johns Hopkins Bloomberg School of Public Health in Baltimore.
"The most effective way to reduce salt is to reduce the content in commercially processed and prepared foods," added Foti, co-author of an accompanying journal editorial.
She said gradual, voluntary reductions across the food supply could have a large public health benefit.
"Reducing average sodium intake by as little as 400 mg per day could prevent up to 32,000 heart attacks and 20,000 strokes annually," she said.
The American Heart Association has launched a sodium-reduction campaign to encourage food companies and restaurants to reduce the salt in their products.
Harnack said food companies and restaurants that have pledged to comply "should be commended."
But, Foti added, doctors should step up their efforts by educating patients about where their salt actually comes from.
"While it's OK to encourage patients to go easy on the salt shaker, more importantly, physicians should emphasize product selection," Foti suggested.
She and Harnack recommended reading the Nutrition Facts panel on packaged foods.
Swap out the high-sodium items with lower-salt options, Foti advised. Salt content in many foods varies widely across brands, she noted.
In restaurants where nutrition information isn't posted, "consumers can request information about the salt content of menu items or ask how foods are prepared," Foti added.
"And of course, choosing more fresh foods, such as fruits and vegetables, can help you reduce the salt in your diet," she said.
The study involved 450 racially diverse adults, aged 18 to 74, living in Birmingham, Ala.; Minneapolis-St. Paul; or Palo Alto, Calif.
Between December 2013 and December 2014, the participants were asked to record their daily diet for four 24-hour periods. In addition, the study participants provided samples of salt equivalent to the amount they added at home.
Average salt consumption was over 50 percent more than the recommended 2,300 milligrams, the researchers found.
Salt added while cooking comprised only about 6 percent of sodium consumption, and salt added at the table from the salt shaker accounted for just 5 percent, according to the study.
Salt naturally found in foods made up about 14 percent of dietary sodium, while salt in tap water, dietary supplements and antacids made up less than 1 percent, according to the report.
SOURCES: Lisa Harnack, Dr.PH., professor and director, nutrition coordinating center, School of Public Health, University of Minnesota, Minneapolis; Kathryn Foti, M.P.H., epidemiologist, Bloomberg School of Public Health, Johns Hopkins University, Baltimore; May 8, 2017, Circulation, online
HealthDay
Copyright (c) 2017 HealthDay. All rights reserved.
News stories are written and provided by HealthDay and do not reflect federal policy, the views of MedlinePlus, the National Library of Medicine, the National Institutes of Health, or the U.S. Department of Health and Human Services.