Our Role in Global Health 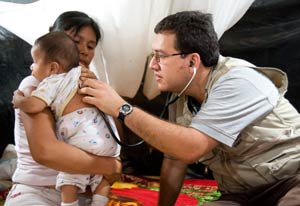 The Fogarty International Center, part of the U.S. National Institutes of Health, supports basic, clinical and applied research and training for U.S. and foreign investigators working in the developing world. For nearly 50 years, Fogarty has served as a bridge between NIH and the greater global health community - facilitating exchanges among investigators, providing training opportunities and supporting promising research initiatives in developing countries. Since its establishment, about 6,000 scientists worldwide have received significant research training through Fogarty programs.
Fogarty funds more than 500 projects involving about 100 U.S. universities. The U.S. scientists, in turn, collaborate with colleagues in numerous foreign countries, most of them in the developing world. Fogarty also convenes the best scientific minds to address critical global health research problems such as polio eradication, pandemic response and strengthening research capacity in Africa.

Diseases know no borders, as we've seen with Ebola, Zika, bird flu, SARS and other infectious disease outbreaks. To protect the health and safety of Americans, the Fogarty International Center has for three decades managed grant programs that develop scientific expertise in developing countries, ensuring there is local capacity to detect and address pandemics at their point of origin, contain outbreaks and minimize their impact. We are all only as safe as our weakest link.

When Ebola struck Africa in 2014, countries with little or no scientific capacity suffered the most, and the cost of the U.S. response soared above $1 billion. Sufficiently strengthening scientific expertise at local institutions, training health leaders and linking them to the global network of experts would require just a fraction of that amount. Fogarty recently awarded grants to build partnerships between scientists at four U.S. institutions and their counterparts in Sierra Leone and Liberia. The goal is to train West African scientists to conduct clinical trials safely and ethically, including how to handle and store specimens, obtain informed consent from study participants, and manage and analyze data. When the next outbreak comes, they will be prepared to rapidly implement therapeutic or vaccine trials. By stopping outbreaks where they occur, it is more likely to prevent them from reaching America. 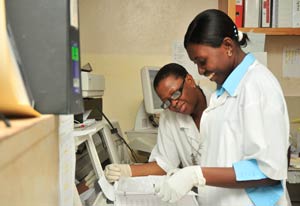 Since 2008, Fogarty, in partnership with the Department of Homeland Security, has coordinated an effort to use mathematical modeling to better predict and prevent the spread of infectious diseases in humans and animals. Fogarty scientists recently built predictive risk maps to understand and forecast the spread of the Ebola and Zika virus epidemics. With these computational tools and data, policymakers can make informed decisions on how to respond to outbreaks. The Fogarty team also studies the evolution of influenza viruses in swine and birds globally to help predict future pandemics in humans, as well as to protect U.S. agriculture from these threats.

We may learn the key to preventing the ravages of Alzheimer's disease - which is expected to strike one in three Americans and cost $1 trillion annually by 2050 - by studying an extended family with hereditary, early-onset Alzheimer's in rural Colombia. Fogarty has provided critical scientific training so that local researchers can perform brain scans, genetic analysis and other sophisticated approaches that has already enabled a clinical trial of a U.S. manufactured drug that might help stop Alzheimer's at its earliest stage. In rural Brazil, scientists trained by Fogarty to investigate Chagas disease have redirected their research skills to examine Zika when that outbreak began. By partnering with foreign scientists, global health research provides unique opportunities to make discoveries that benefit Americans.

Fogarty is vital component of the NIH - training U.S. and foreign scientists and building research expertise that other Institutes and Centers rely upon to conduct research with national and global implications. For HIV/AIDS, Fogarty trainees played a key role in major scientific discoveries that prevent transmission and offer treatment that has turned a death sentence into a near-normal life expectancy. For example, former Fogarty trainees provided local leadership for the groundbreaking multisite HPTN 052 study, which found that early administration of antiretrovirals has a very strong beneficial effect in preventing transmission to uninfected partners. This finding now underpins HIV treatment and prevention policy and practice in the U.S. (and the world). Discoveries like these often can only be made in low-resource settings, where the disease burden is high and obtaining conclusive outcomes applicable to the U.S. is possible.
The number of multinational clinical trials supported by U.S. public and private sector entities has increased significantly over the past few decades, with the fastest growing numbers in developing countries. The success and credibility of this research depend on strong local ethics review boards and appropriate national regulations. Fogarty supports training to produce leaders who can formulate and strengthen bioethics guidelines, build well-informed review bodies capable of evaluating research proposals, and train others in the ethical conduct of research. For example, Fogarty grantees have helped develop the bioethics framework and guidelines in Nigeria, enabling sensitive clinical trials, such as studies of the ZMapp drug for Ebola victims during the epidemic.

Cultivating leadership around the world to contain disease outbreaks

Many leaders in global health today received significant research training through Fogarty support. By having well-trained scientists playing key roles around the world, diseases are more likely to be contained where outbreaks occur and are less likely to spread to America.
Examples include:
Fogarty also encourages the next generation of global health leaders by providing early-career scientists with a year-long mentored research experience in a low- or middle-income country. Here are some of their stories.

Contributing to the US economy