By Hardik Patel, M.Pharm.
Lipodystrophy is a collective term used to describe a bunch of heterogeneous conditions associated with body fat and predisposition to metabolic illnesses such as hypertriglyceridemia, diabetes and hepatic steatosis. 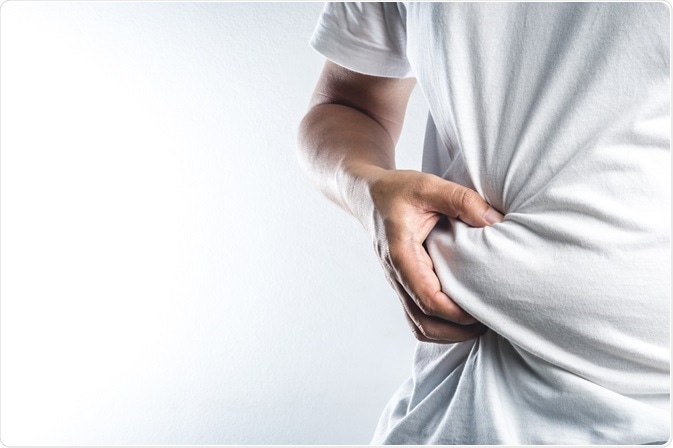 Credit: BonNontawat/Shutterstock.com
Lipodystrophy is characterized by an abnormal fat distribution, which is disproportionately spread around the body and organs. Patients often present with skinny arms and a skinny face, with a large abdomen and fat laden hips.

According to the areas of distribution/loss of fat tissue and the etiology, lipodystrophy has been categorized in four major types:
The acquired forms of lipodystrophy generally trigger during childhood or adolescence due to factors such as autoimmune disorders, severe infections (e.g. pneumonia, measles, hepatitis etc.), or repeated injections to the same region. The genetic types of lipodystrophy are present from birth and are caused by mutations in a range of genes, including AGPAT2, BSCL2, CAV1, PTRF, LMNA, PPARG, PLIN1, CIDEC, LIPE, AKT2, ZMPSTE24, PSMB8, PIK3R1, POLD1, and FBN1.

As with any other ailment, effective treatment largely depends on accurate and timely diagnosis of the type of abnormality. At present, there is no cure for lipodystrophy. Therapeutic management approaches target the specific symptoms and comorbid complications for stabilizing and improving patient’s condition.
Dieticians recommend a balanced food regime with approximately 30% fat, 50% carbohydrates, and 20% protein. The ratio may vary a bit depending on the severity of fat loss. Patients are advised against overeating (even if they remain underweight), mainly because it may worsen the existing hyperlipidemia and diabetes.
Energy-restricted diets are advised in patients with generalized lipodystrophies. However, such food restrictions need to be balanced with the nutritional requirements for sustenance of growth, especially in children. Medium-chain triglyceride containing foods are recommended in infants with severe hypertriglyceridemia. Fiber-rich complex carbohydrates are preferred over simple sugars to avoid sudden spikes in blood sugar level.

Exercise has proven to be helpful to improve metabolic conditions, and is therefore recommended. However, strenuous aerobic exercises should be avoided in patients predisposed to cardiovascular complications. Contact sports are not allowed in CGL patients with lytic bone lesions and in patients with severe hepatic splenomegaly.

As the generalized lipodystrophies are associated with very low levels of leptin (a hormone in adipose tissue which regulates energy expenditure and hunger), recombinant human leptin is administered subcutaneously as a therapeutic intervention to compensate for the lacking. Recombinant human leptin is known to reduce hyperphagia (excessive hunger), and thus control the body weight.
Results from several clinical trials indicate that recombinant human leptin can improve metabolic abnormalities like proteinuria and hepatic steatosis. It has also been shown to lower triglyceride levels. In females, it has been reported to normalize gonadotrophin secretion and menstrual cycle, and improve fertility. However, side effects include pancreatitis and cutaneous T cell lymphomas, amongst others. Moreover, its use in partial lipodystrophies has not been found to be conclusive across different clinical trials.

Management of other lipodystrophy types

Thiazolidinediones may be used for partial lipodystrophies such as FPLD, but they are not typically recommended for generalized lipodystrophies. For the patients with comorbid dyslipidemia who do not attain sufficient lipid control with exercise and diet, lipid-lowering medications such as statins and/or fibrates may be prescribed along with lifestyle modifications after taking into account age, tolerance to treatment, reproductive status etc.
Lipodystrophy patients with insulin resistance and diabetes are treated with traditional oral or injected anti-diabetic medications such as the sulfonylurea class of drugs. Chronic hypertension patients with lipodystrophy can be given routine angiotensin receptor blockers or angiotensin converting enzyme inhibitors, if needed. No particular intervention has been reported to be completely effective for lipodystrophy-associated hepatic steatosis.
In acquired lipodystrophies such as APL, wherein the changes in physical appearance may cause mental distress, physicians may suggest cosmetic surgery. Excess fat can be removed with the help of liposuction and breast implants are also used in some cases to restore normal physical appearance. Patches and protrusions on the skin are usually improved by treatment of underlying reason, however topical creams are also found to be beneficial to some extent.