By Kate Bass, BScApril 30, 2018
Scientists have demonstrated that beams of high-charge electrons produced by laser-wakefield accelerators provide a novel source of high-power terahertz radiation. Terahertz radiation has a range of potential applications in procedures requiring high-intensity fields, such as x-ray imaging. 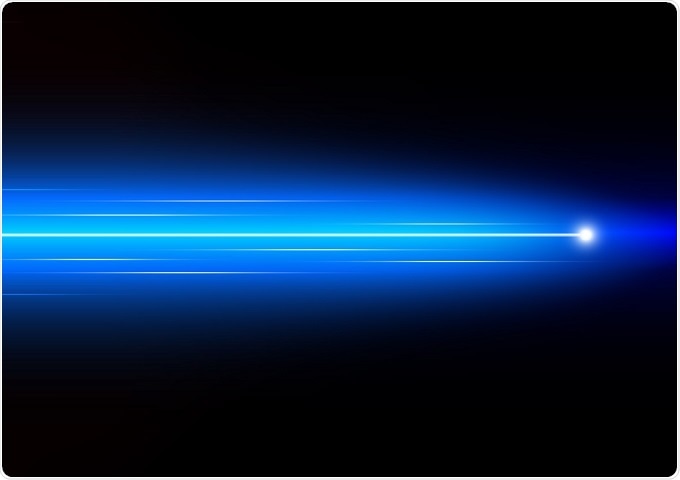 © D-Krab/Shutterstock.com
Terahertz (THz) radiation is electromagnetic radiation with wavelengths are in the range of 0.03 mm to 3 mm. It has frequencies are higher than those of radio waves and microwaves, but lower than those of infrared light. THz radiation thus lies well outside the visible range and can penetrate materials such as plastic, cardboard, wood and composite materials. This makes it a valuable and desirable alternative to harmful x-rays for medical imaging and security applications.
Historically, the lack of good THz sources and suitable detectors meant that THz was little used and so this spectral range was commonly referred to as the terahertz gap. THz light is now used to provide powerful spectroscopic and imaging techniques for characterising molecular structures. It is commonly used in industry to monitor process performance during scale-up and manufacture.
The latest research, led by Professor Dino Jaroszynski, of Strathclyde University, shows that, in addition to the usual high-energy, low-charge beams, high-charge bunches of relativistic electrons are emitted by a laser wakefield accelerator (LWFA).
The distinct high-energy electron beams were produced when an intense ultra-short laser pulse from the LWFA was focussed into helium gas. A plasma bubble moving at the nearly the speed of light was formed.

The increasing availability of intense THz sources will lead to completely new avenues in science and technology...The interaction of intense THz radiation with matter allows access to nonlinear processes, which enables the identification of normally hidden phenomena."
Professor Jaroszynski, Director of the Scottish Centre for the Application Plasma-based Accelerators

Dr Xue Yang, one of the project researchers from Capital Normal University, remarked: “Simulations show that wide-angle electron beams emitted by laser-wakefield accelerators can produce coherent terahertz radiation with 10s µJ to 100s µJ energy when passed through a thin metal foil or at the plasma-vacuum boundary of the accelerator.”
In addition to being a powerful analytical tool for identifying hazardous substances, such as drugs and explosives, THz radiation is a valuable tool in biological research for studying DNA and proteins. It could also be used to characterize semiconductors and nanostructures, whereby facilitating the development of new electro-mechanical devices and solar cells.
Identification of this new source of THz radiation overcomes the previous restrictions imposed by damage to the optical materials at high powers. The researchers demonstrated that laser energy can be efficiently transferred to a very intense pulse of THz radiation.
The provision of this new research tool will inevitably lead to new discoveries advances.
Sources:
Publicado por salud equitativa en 9:08