By Liji Thomas, MD
Pharmacoproteomics is a rapidly advancing field in which the techniques of proteomics are applied to develop pharmaceutical agents. The word itself was coined only in 1997.
However, this branch of study plays a major role in personalized medicine. The word proteomics itself means the study of proteomes, a proteome being the full complement of proteins expressed by an organism or tissue under specified conditions at a specified time.
Proteomes are therefore dynamic, and a given human may have a proteome with as many as two million proteins. The use of this full set of proteins to study the effect of disease or drugs can substitute for much more complex assays in pharmacodynamics at a lower cost in time, financial output, and clinical risk. 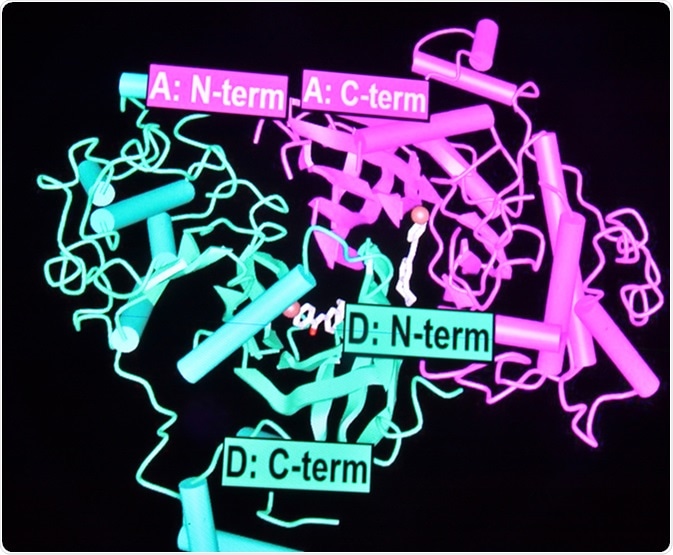 The importance of studying protein modulation by pharmaceutical agents is that while pharmacogenomics provides information about how genetics affects drug efficacy and response, it is the gene expression in terms of protein synthesis that actually reflects the physiological effect of the drug.
For instance, there are about 19,000 genes encoding proteins in humans, but millions of proteins, because of the immense diversity in posttranslational modifications that can occur to change the functional expression of any given gene. Proteomics is also a dynamic study, unlike genomics which is more in the nature of an instantaneous snapshot.
Thus, the addition of pharmacoproteomics is a great step forward in developing a true understanding of how biological systems actually work under genetic constraints imposed by certain genetic associations.
Some of the obvious advantages of studying pharmacoproteomics include the ability to predict which drugs will be ultimately useful in humans, by revealing the pharmacokinetics, bioavailability, metabolism, and adverse or side effects of new or novel therapeutic agents in the preclinical stage. This is made possible by the ability to study how drugs work at the level of protein expression, while simultaneously deciphering their toxicity and resistance to their cellular mechanism of action, early in the drug development process rather than after a prolonged and costly preclinical testing phase.
Additionally, the funds and time saved can be expended on taking forward the development of pharmaceutical agents which have the potential to perform on a higher scale.

Two different approaches are taken in pharmacoproteomics workflows: the targeted and global approach. The first type uses chemically-designed molecular probes to detect special targeted proteins based on their unique affinity or activity. On the other hand, global techniques are more difficult to analyze but yield a wealth of broad-based information on protein expression, sometimes bringing to notice some linkages between pathways thought to be quite separate before.

In a typical pharmacoproteomics application in vitro, the cells are treated with the drug being studied and then lysed to release the proteins, which are hydrolyzed. The resulting peptides are then subjected to mass spectrometric examination.
The SILAC (stable isotope labeling with amino acids in cell culture) method increases the accuracy of quantitative assessment of relative protein abundance in cells treated with the drug and control cells, thus revealing the influence of the drug on the phenotype.
More refined methods are now emerging to detect many more types of proteins and posttranslational modifications in response to drug treatment. This has led to the identification of several mechanisms of action of a single drug through apparently genetically unrelated pathways to produce the final effect.

Progress in pharmacoproteomics has led to greater insight into how drug response varies between patients because of differences in protein expression, compared to pharmacogenomics alone. When applied to diseases of multifactorial origin, it may be of immense benefit in helping to personalize the therapeutic agent to a specific marker found in the patients being treated. Thus, precisely tailored individualized medicine may well become a reality in a few years.
Reviewed by Angela Betsaida B. Laguipo, BS