By Liji Thomas, MD
Fruit has been proved through many studies to have a beneficial effect upon the human metabolism. Daily fruit consumption has been found to promote weight loss and lower the risk of long-term weight gain. 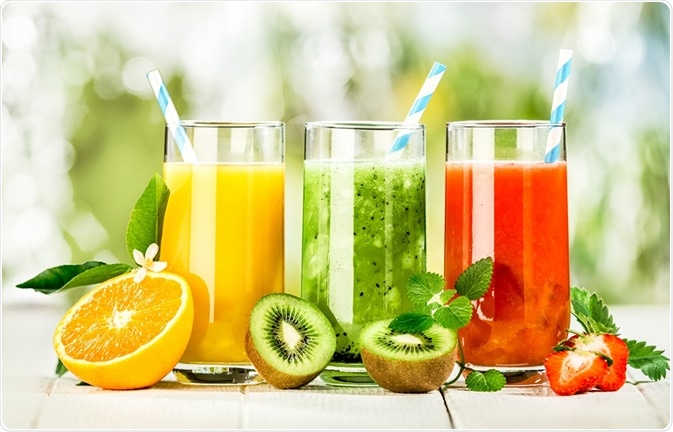 Credit: stockcreations/Shutterstock.com
The effects of fruit juice are paradoxical, because fruit is known to be rich in simple sugars. Simple sugars such as sucrose, glucose and fructose are associated with weight gain, dyslipidemia (increase in potentially dangerous blood lipids), hypertension and cardiovascular heart disease, as well as cancers.

The health-promoting activity of fruits has been the subject of multiple studies. It is thought to be due to multiple mechanisms, some of which are:
Satiety
Increased satiety and slower release of sugar into the blood stream with whole fruit intake, leading to decreased frequency and volume of food intake. Satiety is a biochemically mediated process which involves the secretion and binding of various peptides that act as signals, released from the gut and other organs in response to food intake. This in turn regulates hunger and appetite.
Fiber content
Reduced overall energy intake because of the abundant soluble fiber content in whole fruit. Fiber produces satiety feelings and prevents further hunger-associated cravings. It reacts with water in the small intestine to form a thick gel, which in turn inhibits gastric emptying and digestive enzyme secretion.
The slowing of the process of food digestion means that the products of digestion (carbohydrates, fats and proteins) are made available to the body at a much slower rate. The receptors for the digestion products are thus kept in contact with their substrates (fatty acids, amino acids and sugars) for a much longer period, which leads to prolonged reduction of hunger feelings.
The volume of undigested food also increased by gel formation, which in turn reduces nutrient extraction and overall energy gain.
Effects on the microbiome
Increased beneficial microbiota in the gut such as Bacteroides, which are associated with lean metabolism because of the availability of suitable substrate in the form of undigested fruit residue.
Antioxidant effects
It has also been shown to increase the availability of phytochemicals, which have powerful antioxidant activity and may inhibit fat production.
Weight management
The anti-obesity actions of fruit intake have been confirmed in various types of interventional trials, and have been shown to occur with fruit and pure fruit juice. Since such trials were conducted on obese or overweight individuals and lasted for short periods of time, such as a few months, the positive effects on body mass index (BMI), body weight and waist circumference increased significance in the light of the relatively modest interventions and the short-term nature of such dietary alterations.
However, this has been disrupte by some studies, which have found a correlation between obesity risk and increased fruit intake. Simple sugars in several types of fruit juice are abundant and they increase the total energy intake when such juice is regularly consumed over a long duration. The choice of such fruits in excess is thus sometimes connected to weight gain.

In one study, increased fruit juice consumption in early life led to a higher risk of obesity and shorter adult height. This was again confirmed in another study, where fruit was added to a full-calorie diet instead of substituting for other sources of sugar, and therefore led to weight gain.

Other studies have clarified that increased fat mass is related to regular fruit juice consumption only, whether homemade or commercially produced, and the juice only increased the gain in children who are already overweight or obese.
Lack of fiber
This is due to the lack of dietary fiber in pure fruit juice, even though most other beneficial phytochemicals are present in more or less the same proportions as whole fruit. Commercially produced fruit juice lacks fiber and thus does not produce a prolonged feeling of satiety for long, rather increasing the feeling of hunger and increasing the total food intake.
Added sugar
Fruit juice also is often likely to contain added sugar for preservation and taste enhancement, which again contributes to the risk of obesity.
Rapid absorption
Fluids are able to pass into the intestine much faster than the corresponding solids, and thus are absorbed more rapidly. Thus, fruit juice causes the blood glucose and the insulin levels to spike faster and higher than the whole fruit does. This explains how fruit juice increases the risk for type 2 diabetes and obesity with associated disease risk, in contrast to the lowered risk with whole fruit.
Glycemic index
The Nurses’ Health Study and Health Professionals Follow-up study showed that fruit consumption added only a tenth of the total glycemic load to the diet. Among fruits, whole bananas, apples and grapes contributed about 3-4%, 2% and 1% respectively.
However, this was not the case with fruit juices. A whole orange contributed a glycemic load per serving of 6.2, compared to 13.4 for orange juice; meanwhile, the orange fruit contained 3.1g fiber per serving but the juice had 0.5g per serving only.
Many researchers have thus brought out the relationship between fruit juice and BMI, but whole fruit is associated with obesity in only a very few studies, mostly with excess-calorific dietary intake.

An interesting study compared apple slices, applesauce and apple juice of two kinds (with or without fiber) eaten just before starting lunch. The apple slices reduced the total intake of energy during lunch by 91 kcals less than that seen with applesauce, and 150 kcals less than with apple juice, while producing feelings of satiety and reducing feelings of hunger.
Again, this demonstrates the positive health benefits of eating fruit shortly before a meal by its effect upon total energy intake during the meal. In whatever form the fruit was consumed, it led to a lower total intake, which was much more marked with whole fruit than with juice (even with fiber), and intermediate with applesauce.
This is more significant because the servings of apple in various forms were carefully matched for multiple parameters that could affect satiety: the fiber and energy content, weight, energy density and the rate at which they were consumed
Of course, if fiber content does not fully account for this difference in energy intake with fruit juice and whole fruit, subjective expectations may contribute to the variation. The experimental groups may have expected to feel fuller with whole apple slices than with juice, which may have influenced their eating behavior.
A third explanation is the difference in structure of whole fruits and juice. The cellular structure of whole fruit requires chewing which gives it larger volume. Yet in the previous volume-matched experiment the effect of applesauce and apple juice was different when satiety was the outcome.
Chewing may therefore also affect metabolism. This has been confirmed by research on the cephalic phase of digestion which shows that chewing is the initiating factor in this stage. This may partly explain the feeling of fulness after eating whole fruit as compared to fruit juice.
Thus, cognitive influences (expectations of satiety), volume of food (due to the cellular structure of whole fruit), and chewing of whole fruit may all affect the final food intake by varying the feelings of satiety and hunger. Thus research concurs that eating whole fruit is beneficial to health and prevents a broad category of disease, while fruit juice may be counterproductive to overall health in some categories.
Reviewed by Chloe Barnett, BSc