A new study has highlighted how body clock processes within the body are influenced by night-time light. The findings, reported in The Journal of Physiology, are of significant importance to people who suffer from a lack of quality sleep (night shift workers etc), and may help treat depression. 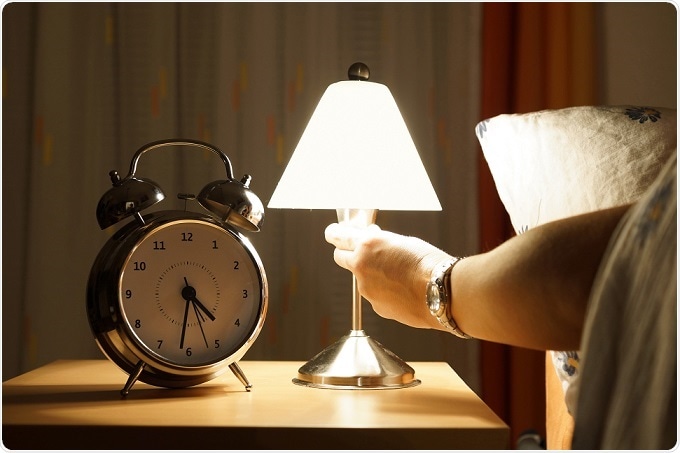 © Bacho/Shutterstock.com
Circadian rhythms are the internal clock of the human body. It is regulated by a number of physiological processes that oscillate in 24-hour rotations, such as varying levels of sleepiness that occur each day. The most powerful environmental time cue to reset this internal 24-hour clock is light. Our brains create a hormone named melatonin during the night which helps to control our body clock; when exposed to light prior to sleeping, individuals can experience a reduction in sleep quality due to this lack of melatonin production.
This study aimed to investigate the connection between the suppression of melatonin and circadian phase resetting, which is the physiological process wherein our internal body clock is able to synchronize with external time cues, such as day and night. Circadian phase resetting and melatonin suppression commonly correlate; significant melatonin suppression often causes big shifts in the body clock. The correlation between the two processes is typically viewed as signs of a functional connection, which provides the theory that one can be used in a proxy capacity for the other.
As it is the easier of the two to measure, melatonin suppression is routinely used to determine the effects of light exposure on the body clock during the night. This study has dismissed this association by discovering that the significance of shift in the internal body clock and melatonin suppression are separate from one another, thereby challenging the practise of using melatonin suppression as a proxy for circadian phase resetting.

The team tested participants who were exposed to either sporadic or ongoing exposure to bright light during the night, to assess the link between circadian phase resetting and melatonin suppression. They were each required to carry out a nine to ten day inpatient study at Brigham and Women's Hospital, Boston, observing strictly controlled lab conditions as well as control of their sleeping and waking activity and light and dark schedules.
Sporadic exposure sequences produced more notable phase shifts with disproportionately low melatonin suppression. Although each intermittent bright light pulse produced an equal amount of melatonin suppression, an equal amount of phase shift was not achieved.

Overall, our data suggest that melatonin suppression and phase resetting are sometimes correlated, but ultimately are regulated by separate neurophysiological processes. Therefore melatonin suppression is not a reliable surrogate for phase resetting. This is an important consideration for developing light-therapy treatments for people who have poor quality sleep and biological clock disruption, such as shift workers, or disorders such as depression. Additional work is needed to optimize light therapy protocols used as treatment."
Dr Shadab Rahman, Brigham and Women's Hospital, Boston

While the outcomes of this research indicate that circadian phase resetting and melatonin suppression responses to light exposure at night are independent phenomena, there is the possibility that these results may be affected by the restrictions of sample size for every separate light exposure condition.
Source:
Publicado por salud equitativa en 9:07