By Liji Thomas, MD
Lipodystrophy is a fat metabolism error, which manifests clinically in the form of excessive fat deposition in some areas such as the abdomen, the back, face and neck, or the breasts, or simply as fatty tumors known as lipomas, while in other sites there is an evident atrophy of fat tissue, such as over the extremities and the buttocks. This is typically associated with metabolic dysfunctions such as insulin resistance, diabetes mellitus and hyperlipidemia, with complications such as hypertension. 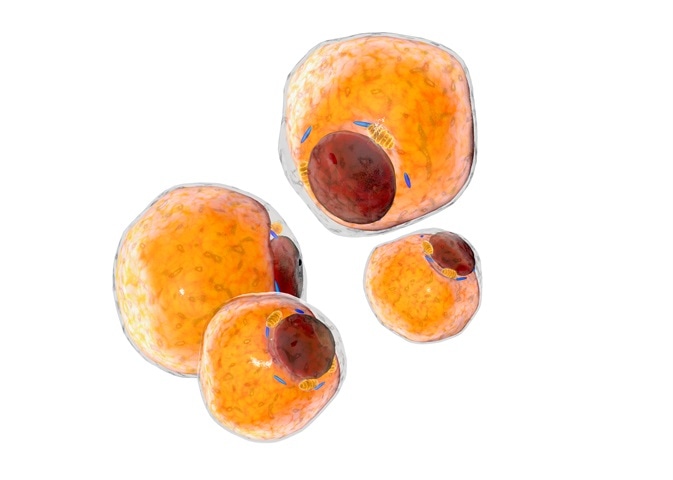 Both congenital and acquired forms of lipodystrophy are known, and may extend over the whole body or part of it. Some of the factors known to be associated with the causation of this condition are described below.

This form affects mostly the extremities and the face, and is seen to occur in about half of patients following three or four years of treatment with antiretroviral drugs such as nucleoside reverse transcriptase inhibitors which may inhibit the normal function of the respiratory chain by mitochondrial toxicity. The lack of normal fatty acid oxidation leads to the buildup of triglycerides and other fatty acid metabolites, leading to their entry into the systemic circulation.
Protease inhibitors also inhibit the maturation of various factors that are essential for the normal functioning of adipocytes, leading to increased blood triglycerides and fatty changes in the liver. Other factors which contribute to lipodystrophy in this case include the genetic makeup and the presence of HIV infection, with its pro-inflammatory state and viral interference with some adipocyte enzyme functions, as well as the age and sex of the patient.

This has been reported in over 300 cases so far and is marked by a complete absence of fatty tissue at birth. This leads to over-prominence of the muscles, veins standing out in relief and coarse features suggestive of acromegaly. Other features include severe acanthosis nigricans, hepatosplenomegaly, and the development of metabolic complications like diabetes early in life. The condition is caused by a mutation of the AGPAT2 or seipin genes.
These genes encode phosphatidic acid and seipin, both of which are critically involved in normal fat cell function. Tissues deficient in either of these undergo dystrophy. However, in the first subtype, metabolically active fat tissue undergoes atrophy, while in the second subtype, both metabolically and mechanically important fat is affected.  Leptin levels are always low.
Caveolin deficiencies have also been reported which result in lipodystrophy, in some cases associated with muscular dystrophy.

This type leads to a normal phenotype at birth with loss of fat from the limbs at the time of puberty or shortly thereafter. The best known subtype is the Dunnigan variety. Metabolic dysfunction is related to the extent of fat loss and therefore varies between subtypes. Fat loss may occur over the limbs and the breast area, but the face and neck accumulate excessive fat. Leptin levels vary because of the non-uniform pattern of fat loss.

The primary difference between these and the congenital types is their inheritance, because they are metabolically and phenotypically quite similar to CGL. About half of them are of unknown cause, while 25% each are due to panniculitis (atrophic inflammation of the subcutaneous fat) and autoimmune disease.
However, patients with acquired partial lipodystrophy always lose fat only from the upper part of the body and have a lower incidence of diabetes, hypertension and dyslipidemia. The exception is in the subtypes associated with autoimmune disease, which are associated with severe dysfunctions of these metabolic processes, but are happily quite rare. These include conditions such as rheumatoid arthritis, juvenile dermatomyositis, Sjogren’s syndrome and lupus.

The metabolic diseases associated with lipodystrophy have been shown through many clinical research studies to be directly related to the lack of leptin secretion from atrophied adipose tissue. The hormones secreted from fat play a crucial role in maintaining homeostatic processes for glucose and lipid metabolism.
The administration of leptin or implantation of leptin-secreting adipose tissue was shown to result in alleviation of insulin resistance and hyperglycemia in rodents suffering from congenital lipodystrophy. This may explain the marked improvement in patients on long-term leptin therapy (with metreleptin, the leptin analog) with respect to blood lipids and glucose levels, hepatic steatosis, renal disease and insulin resistance. Metreleptin is not, however, efficacious in patients with HIV-related lipodystrophy.
Reviewed by Alina Shrourou, BSc