By Shelley Farrar Stoakes, MSc, BSc
Lipid peroxidation is a metabolic process that causes oxidative deterioration of lipids by reactive oxygen species. This process can degrade the lipids within the cell membrane leading to cell damage and eventually, cell death. 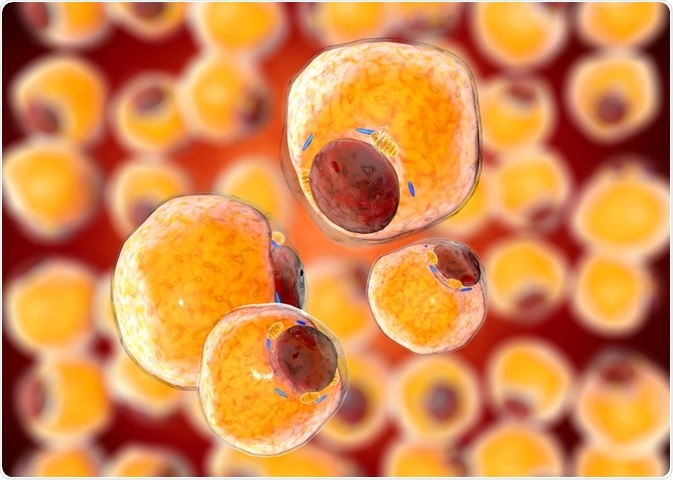 Two electron reductions cause hydroperoxide decomposition that inhibits peroxidative damage, while one electron reduction induces new lipid hydroperoxides by contributing to the initiation and propagation steps. Studies have found that LOOH in serum can be used as an indicator of oxidative stress in tissues.
MDA is the most mutagenic product of lipid peroxidation and is commonly used as a biomarker for oxidative deterioration in omega-3 and omega-6 fatty acids. The thiobarbituric acid (TBA) test uses the reactivity of TBA towards MDA to measure autoxidative degradation within edible fats and oils.
4-HNE is the most toxic secondary product of lipid peroxidation, and it displays a dual role as a protective signaling molecule during gene expression and a cytotoxic promoter of pathological pathways.

Cancer cells have increased levels of reactive oxygen species, indicating a connection between oxidative damage and abnormal cell growth. The amount of lipid peroxidation varies within cancer cells with different concentrations of 4-HNE can be found depending on the origin of tumor.
Studies have found a link between the addition of 4-HNE to cancer cells and a reduction in cell proliferation. Human leukemic cells, that ordinarily have undetectable amounts of lipid peroxidation, strongly decrease cell proliferation when treated with low concentration of 4-HNE. Inhibition of cancer cell growth has also been documented in other tumor types, including colon and breast cancer.
Another study that compared the reaction of human lymphatic leukemia cells and normal human peripheral blood lymphocytes to 4-HNE found a cytotoxic effect only in the lymphatic leukemia cells. 4-HNE is therefore a potential agent to improve therapeutic outcomes of cancer. This could be achieved by adaptations to intrinsic oxidative stress which potentially enhance conventional chemotherapy or radiotherapy which is currently limited by resistance of some cells to apoptosis.
Reviewed by P. Surat, PhD