By Dr Ananya Mandal, MDApril 13, 2018
A new study has shown that the current safe limits of alcohol consumption are overestimated. In one of the largest worldwide alcohol consumption studies, the researchers noted that taking over six glasses of wine or six cans of beer per week can reduce years of life.
Australia guidelines say that 14 standard drinks or seven pints of beer or around nine glasses of wine per week is safe. This new study shows that it isn’t. In the United States low risk drinking is defined as two drinks a day for men and one drink for women. The guidelines allow 14 drinks a week for men and 7 drinks a week for women. The limits are lowered for people over the age of 65. United Kingdom has lower limits and same levels for both men and women. The UK levels might be in tune with what this study suggests is safe. The study appeared in the latest issue of The Lancet this week. 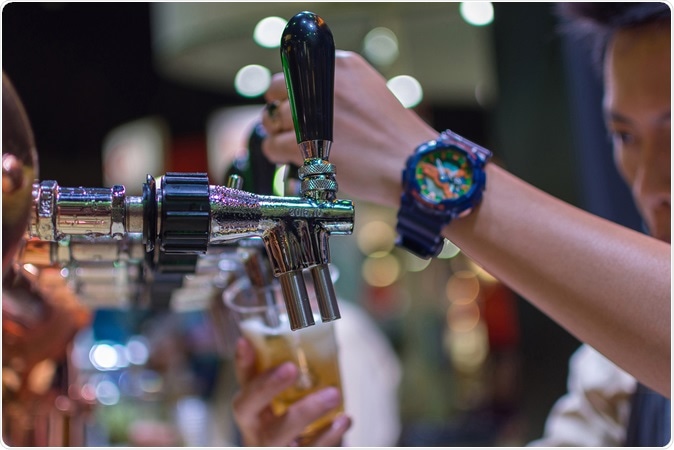 Image Credit: PongMoji / Shutterstock
Professor Bu Yeap, a health researcher at the University of WA says that the bottom line from this study is that “less is probably better”. He explained that the study notes that people who are drinking less than 10 standard drinks a week have the lowest rates of deaths compared to others. For this study the team of 120 researchers worldwide looked at data from 599,912 drinkers from 19 different countries from way back in 1964 in some cases. Professor Yeap says that the size of the study means that the trends are clearer.
The study results show that drinking over 100 grams of pure alcohol or around 10 standard drinks per week can be risky. A standard drink is defined as 12 ounces of beer or four ounces of wine, or 1.5 ounces of 80-proof spirits. Mathematical calculations have shown that a 40 year old man who takes around 10 to 20 standard drinks per week shortens his life expectancy by six months. The time is shortened by four to five years if the number of drinks goes over 35 standard drinks per week.  Estimates show that a person who drinks around 7 to 14 cans of beer per week with each can being around 1.4 standard drink, the risk of death rises by 5 percent compared to those who drank lesser. Similarly drinking over 21 cans and 35 cans per week raises risk of death by 20 percent and 50 percent respectively, the researchers estimate. Yeap suggests that the best amount that can be safely taken is less than 100 grams of alcohol per week.

Alcohol can kill in multiple ways. It causes damage to several organs such as liver, intestines, heart, brain etc. in the body and accidental deaths are associated with binge drinking. Alcohol is also associated with raised risk of cancers.
Aaron White, senior scientific adviser at the National Institute on Alcohol Abuse and Alcoholism, part of the National Institutes of Health called this an impressive study saying that this was an important issue because most people drink and moderate drinking is one of the most common. Safe levels should be advised. He explained that there is no set number below which risk is low. The safe limits are influenced by various factors such as age, gender, body weight, rate of consumption, concomitant medications etc.
Source:
http://www.thelancet.com/journals/lancet/article/PIIS0140-6736(18)30134-X/fulltext
Publicado por salud equitativa en 13:42