By Dr Ananya Mandal, MDApril 22, 2018
While people are getting more and more health conscious they are increasingly bending in favor of artificial sweeteners especially zero-calorie ones. New research has found that these replacements for sugar are likely to cause health changes which may be associated with diabetes and obesity. 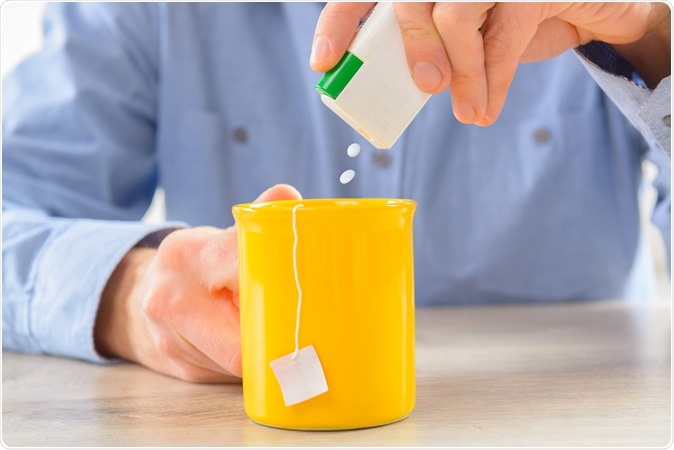 Image Credit: Monika Wisniewska / Shutterstock
Artificial sweeteners have now become one of the most common food additives worldwide. They are consumed in a variety of foods and beverages including diet soda etc. This new study looked at one of the largest populations to check on hat these artificial sweeteners are capable of doing within the body. The team looked at the metabolism of the sugars and sweeteners within the body after consumption. They used technique such a high-throughput metabolomics. The team also looked at the effect of these products on the health of the blood vessels. They used rats and cell cultures for the purpose of the study.

For this experiment the team included a group of rats that were fed diets high in glucose or fructose or aspartame or acesulfame potassium. The former two were natural sugars while the latter to ere zero-calorie artificial sweeteners. On feeding the rats for three weeks there were differences in the concentrations of fats and amino acids and other parameters in blood of the animals. Acesulfame potassium was accumulating in blood and in higher concentrations was damaging the lining walls of the blood vessels.
Lead researcher Brian Hoffmann, PhD, assistant professor in the department of biomedical engineering at the Medical College of Wisconsin and Marquette University explained that there has been a rise in obesity and diabetes despite the widespread use of non-caloric artificial sweeteners. This new study shows that both sugar and artificial sweeteners have negative effects on the body causing obesity and diabetes. The mechanisms for causing obesity are different however for these.
Hoffmann said when there was an overload of the sugars; the machinery that handles them seems to break down.  Non-caloric artificial sweeteners also lead to “negative changes in fat and energy metabolism,” he explained. More studies are necessary to prove if these artificial sweeteners are definitely bad. This study however is enough to show high dietary sugars as well as artificial sweeteners have a negative health outcome.
Hoffmann presented the research at the American Physiological Society annual meeting at the 2018 Experimental Biology meeting that is being held between April 21st and 25th in San Diego.
Publicado por salud equitativa en 7:16