By Hannah Simmons, BSc.
The growth and division of a cell is orchestrated into a highly controlled and ordered process called the cell cycle. 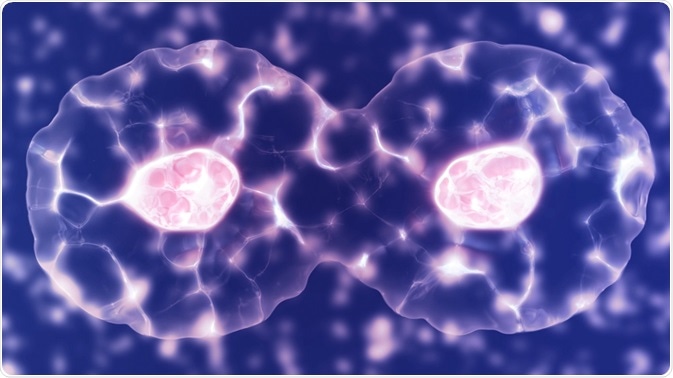 Credit: mirela377/Shutterstock.com
The cell cycle contains 4 stages; Gap 1 (G1) phase, synthesis (S) phase, gap 2 (G2) phase and mitosis (M) phase. For most human cells, a single cell cycle takes approximately 24 hours. However, in tissues where there is a constant need for cell renewal and replacement, such as the lining of the intestine, the process is much shorter, taking as little as 9 hours.

G1, S and G2 phases are all cumulatively referred to as interphase involving the growth of a cell and the replication of its DNA. Initially in G1 phase, the cell grows physically and increases the volume of both protein and organelles. In S phase, the cell copies its DNA to produce two sister chromatids and replicates its nucleosomes. Finally, G2 phase involves further cell growth and organisation of cellular contents.

During the M phase, the cell divides into two daughter cells. The DNA initially condenses to form chromosomes which are pulled apart by a mitotic spindle. This M phase is further divided into 4 stages; prophase, metaphase, anaphase and telophase.
Prophase: The DNA condenses to form chromosomes and mitotic spindles begin to form between the two nucleosomes. These spindles then begin to bind to kinetochores on the chromosomes and organise them in the centre of the cell.
Metaphase: Chromosomes which are bound by their kinetochores are pulled into the centre of the cell, forming a line called the metaphase plate. The cell then ensures that all chromosomes are bound on two separate kinetochores, one on each sister chromatid, in a phase called the spindle checkpoint. This confirms that each new cell will contain an even amount of DNA material once the cell splits.
Anaphase: After the cell successfully passes through this check point, it will then enter anaphase. Cohesins, which hold chromosomes together, are cleaved and the bound microtubules begin to shorten. This process pulls the sister chromatids apart to opposite poles of the cell. The remaining microtubules, which are not bound to chromosomes, then elongate and force the two halves of the cell further away from each other.

Telophase: At this point, the cell is almost completely divided. Within telophase, DNA decondenses and the mitotic spindle is broken down before two separate nuclei develop.

Once the DNA is split, the physical cell divides in a process called cytokinesis. Initially, a contractile ring forms in the centre, dividing and pinching the cell in half. This forms an indentation called the cleavage furrow, which eventually splits the cell into two identical daughter cells.

Control of the cell cycle

Overall this process is highly controlled by various proteins, which act to both stimulate and inhibit the cell cycle. Cyclin and cyclin-dependent kinases (CDKs) are amongst the most important proteins involved in the stimulation of the cycle. Cyclin levels are raised and lowered at different stages of the cycle, which stimulates the function of CDKs whose presence is stable but can only function in the presence of cyclins. CDKs function to phosphorylate many different proteins which are required for passing important points in the cell cycle, called checkpoints.
These checkpoints are present at the end of G1 and the start of G2, functioning to ensure that the vital processes of each stage are carried out before the cell moves onto or leaves S phase. There is also an M phase checkpoint (the spindle checkpoint) which ensures that the chromosomes are correctly aligned, as previously described.
Overall these checkpoints function to ensure the integrity of the genome and prevent DNA damage. If a cell does not meet the requirements of the checkpoint, then the cell cycle is halted and the DNA can be repaired, or if the DNA is beyond repair, then apoptosis can be stimulated.
If these checkpoints are lost due to mutated proteins, then the cell cycle is no longer controlled and can lead to ungoverned replication, for example, mutations in the TP53 gene lead to many types of cancer.
This protein is involved in cell cycle arrest and transcription of proteins involved in DNA repair or apoptosis. Therefore, loss of this gene means that the cell cycle cannot be halted and DNA cannot be repaired, resulting in tumorous growth.
Overall the cell cycle is an essential process for the growth and repair of tissues. It is organised into 4 distinct phases; G1 phase, S phase, G2 phase and M phase, and controlled by the presence of checkpoints. Loss of control is implicated in cancer, such as with mutations resulting in the loss of cycle arrest and DNA repair, which demonstrates the importance of correct regulation.