By Liji Thomas, MD
Pituitary tumors are growths arising from the pituitary gland, a pea-sized gland in the middle of the head (behind the nose), nestled in a shallow bony socket atop the sphenoid bone. Pituitary tumors contribute 10-15% of all brain tumors known to exist. 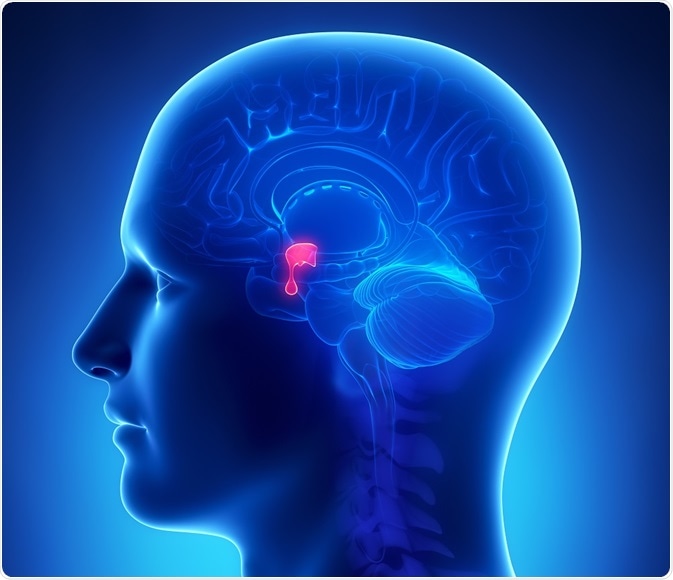 Credit: CLIPAREA Custom media/Shutterstock.com
The most common type of pituitary tumor is a gland cell tumor or adenoma. They may produce symptoms by pressing on the vital structures around them or by producing excessive amounts of one or more hormones which disrupts the normal functioning of the body.

It is difficult to assess the true relationship between an apparent risk factor and the incidence of pituitary tumors, primarily due to the long incubation period of such tumors. As a result, a so-called risk factor may actually be a result of a preclinical tumor. Most pituitary tumors are of unknown etiology.
A family history of pituitary tumor is rarely known to occur, mostly associated with the MEN 1 syndromes (caused by MEN1 gene mutations) which has a 50% chance of being transmitted to the offspring of affected parents.
Some cases are of unknown etiology or due to inherited genetic defects. MEN4 is another rare condition caused by changes in the CDKN1B gene. The McCune-Albright syndrome is also found to cause some pituitary tumors along with café-au-lait patches and bone defects, due to GNAS1 gene mutations.
The Carney syndrome is caused by genetic changes, and one known change is in the PRKAR1A gene.  Another small percentage is linked to germline mutations in the AIP (aryl hydrocarbon receptor interacting protein), specifically growth hormone producing adenomas (though not in all cases).

Other risk factors for pituitary tumors

Some other risk factors have been identified, but their presence has not been confirmed in all cases. These include:

Estrogen exposure
Estrogen exposure (as with oral contraceptive use), which has been negatively linked in almost every study. This is unexpected because estrogen does stimulate the growth of prolactin-secreting lactotroph cells in the pituitary gland, and because animal studies using estrogen supplements show a positive correlation.
Parity
Parity (i.e. having at least one child) has been negatively linked to pituitary tumor risk, despite the pituitary hyperplasia that occurs with pregnancy. This may be explained by the fact that subclinical pituitary tumors may also impact the woman’s fertility.
Allergy medications
Patients with allergic diseases (such as hay fever) who took regular medication also show a lower risk of developing pituitary tumors. It is thought that the constant surveillance by the immune system in allergy is the reason for the reduction in risk.
Another possible protective mechanism may be some unknown effects of anti-allergic medication. The raised tumor antigens may spur the immune system to eliminate tumor cells, lowering the incidence of the tumors.
Other protective factors
Negative associations were also observed with smoking, a history of other tumors, previous head injury or epilepsy.
Reviewed by Dr Tomislav Meštrović, MD, PhD