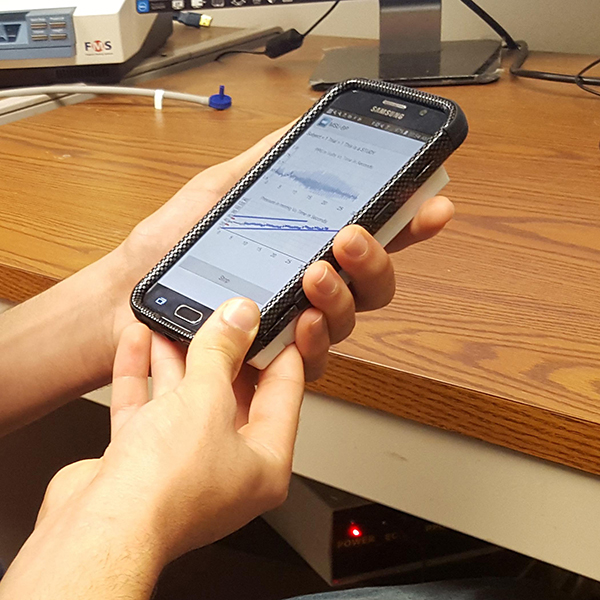 User reviews smartphone screen while pressing finger to blood-pressure detection device attached to the back of the phone. Courtesy Michigan State University.
Smart technologies, including phones and other personal devices, have grown in popularity around the globe. With built-in sensors and the ability to tap expansive networks of data, they are uniquely poised to inform health and fitness decision making. Two recent studies, funded in part by the National Institute of Biomedical Imaging and Bioengineering(NIBIB), have assessed the potential of smart technologies in playing lifesaving roles in two areas.

Blood pressure is an important indicator of cardiovascular health. In adults, chronically elevated blood pressure can lead to heart attack, stroke, or kidney failure. A blood pressure reading is represented as a fraction: the systolic pressure is the numerator, detected during heart beats. The diastolic pressure is the denominator, detected between beats while the heart momentarily rests. Health care providers typically obtain a blood pressure reading with a blood pressure cuff device, called a sphygmomanometer.
As most of us know, obtaining a blood pressure reading with the inflatable cuff device is cumbersome and usually requires medical expertise. The reading is for a moment in time, so does not detect important fluctuations during the course of the day. A team led by NIBIB-funded researchers at Michigan State University are working to develop a smartphone-based blood pressure monitoring system that can take readings from finger pressure, without the cuff device.
In their study in the March 7, 2018, issue of Science Translational Medicine1, the team modified a smartphone with an optical sensor and transducers that convert units of force into electronic signals. The optical sensor, called a photo-plethysmograph, measures arterial blood volume in a finger. It detects uses light-emitting diode (LED) signals that are recorded with a semiconductor. A smartphone app tells the user if he is applying sufficient pressure to obtain a reading.
The researchers tested the device with 32 participants and found that the smartphone-based blood pressure system provided readings that are just as accurate as a device called a volume-clamp, which uses a cuff on a finger, and that is approved by the Food and Drug Administration. The smartphone device performed with somewhat less accuracy than can be achieved with an arm-cuff device. The results showed that the new device is feasible as a tool that individuals can use on their own and that is acceptably accurate.

Smartwatch and mobile app aids in detecting prevalent cause of stroke

NIBIB-funded researchers at the University of California, San Francisco (UCSF), used the photo-plethysmograph that is built into smartwatches to detect occurrence of atrial fibrillation in study participants. People experience atrial fibrillation when rapid, disorganized electrical signals cause the two upper chambers of the heart to flutter and beat quickly. Millions are affected by atrial fibrillation, which can cause blood to pool and clot, and can sometimes lead to stroke. 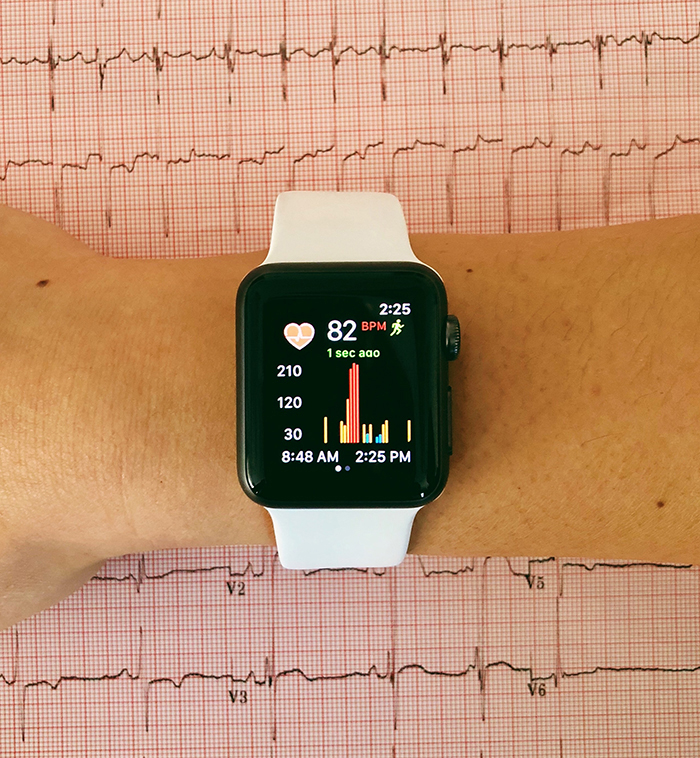 Smartwatch displays heart rate. UCSF researchers used the device in a study to detect atrial fibrillation, which can lead to a stroke. Credit: Gregory Marcus.
In a study published March 21, 2018, in JAMA Cardiology2, the researchers tested the use of smartwatches with an app that continuously collects data and operationalizes pattern recognition. Developers call the app’s activity machine learning, and refer to the wealth of data at its disposal as a deep neural network. Neural networks mimic the human brain’s processing power by accumulating and connecting many data points. The researchers used smartwatch data collected online from 9,750 participants in UCSF’s Health eHeart Study, including 347 with known atrial fibrillation, to assemble the neural network. They conditioned the vast data resource to be able to classify irregular heart rhythms.
To find out the accuracy of the smartwatch device and app to detect atrial fibrillation, the researchers tested it with 51 participants on medical appointments for atrial fibrillation treatment. The participants also received electrocardiogram assessments with electrode placements—the gold standard for measuring electrical activity. The researchers found that the experimental smartwatch system was 97 percent accurate compared with the electrocardiogram results.
The researchers also asked 1,617 participants to use the smartwatch system and to record when they felt they experienced atrial fibrillation. Of this cohort, four percent experienced atrial fibrillation on a regular basis. The smartwatch system was 72 percent accurate in detecting atrial fibrillation versus the self-recording from participants.
The smartwatch study demonstrated a new way to screen people who could benefit from early treatment for the common disorder. The app used in the study is believed to be the first to employ a smartwatch to detect atrial fibrillation or any arrhythmia.
1. Smartphone-based blood pressure monitoring via the oscillometric finger-pressing method. Chandrasekhar A, Kim CS, Naji M, Natarajan K, Hahn JO, Mukkamala R. Science Trans Med. March 7, 2018. The work was supported in part by NIBIB (EB-018818).
2. Passive Detection of Atrial Fibrillation Using a Commercially Available Smartwatch. Tison GH, Sanchez JM, Ballinger B, Singh A, Olgin JE, Pletcher MJ, Vittinghoff E, Lee ES, Fan SM, Gladstone RA, Mikell C, Sohoni N, Hsieh J, Marcus GM. JAMA Cardiology. March 21, 2018. The UCSF Health eHeart Study team is developing an infrastructure platform to facilitate mobile health, called Euriaka, which is supported by the NIH Common Fund through a cooperative agreement administered by NIBIB (EB021881).
Program Area:
Biosensors,
Connected Health
Health Terms:
Cardiovascular,
Heart Disease,
Medical Devices
Division:
Division of Discovery Science & Technology (DDST)
Division of Health Informatics Technologies (DHIT)
Publicado por salud equitativa en 7:12