By Liji Thomas, MD
Meningitis is a condition in which the meninges, the three thin layers that cover the brain and protect it against rapid exposure to outside agents, become inflamed. In most cases, meningitis is either bacterial or viral. 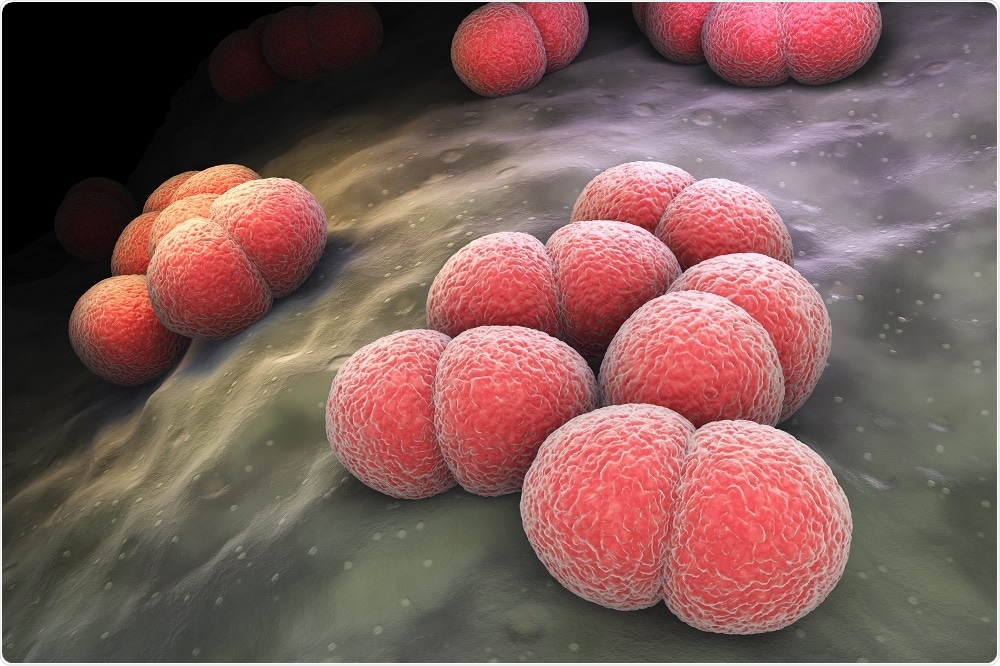 Credit: Tatiana Shepeleva/Shutterstock.com
Meningitis can be infectious or non-infectious, and affect both healthy and sick individuals. While environmental factors such as traveling to places where some bacterial causative agents are rife, or exposure to an infected person play a role, having an immunocompromised state such as HIV, diabetes mellitus, or being on chemotherapy or steroid medications, are also important factors.

When bacterial organisms cause meningitis, the condition is called bacterial meningitis (BM). The disease may be fatal, may affect both adults and children, and may be caused by several types of bacteria. The bacteria first enter through the upper respiratory tract, to cause an upper respiratory tract infection such as sinusitis, otitis media, or pharyngitis. They then invade the systemic circulation to travel to the brain. Some types of BM are also caused by direct meningeal infections e.g. through a cracked skull or severe scalp inflammation.
BM is known to produce severe complications such as stroke, deafness, and permanent damage to the brain, especially if not treated in time. It has a high mortality rate of about 25-30% in adults.
The most common form of BM is pneumococcal, caused by Streptococcus pneumoniae, and this is the most severe type as well. This virulent organism also causes pneumonia, blood poisoning, and infections of the ear and paranasal sinuses.
Pneumococcal meningitis affects very young children under the age of 2 years, immunocompromised adults, and the elderly (usually those whose immunity is weakened) in most cases. Some types of pneumococcal meningitis can be prevented by immunization.
Another deadly and contagious type of meningitis is meningococcal meningitis, caused by Neisseria meningitides. It strikes mainly infants, people travelling to the other parts of the globe with endemic diseases, those with weakened immunity, and first-year residents of college dorms.

Meningococcal meningitis has a  mortality rate of 10-15%, however another 10-15% of the survivors suffer brain damage and other severe neurologic sequelae. Its high transmission rate means that anyone who might have a close contact with the patient should ideally receive prophylactic antibiotics.
A third common pathogen is Hemophilus influenzae, but its reach has now decreased because of widespread immunization with the Hib vaccine. Other agents include Listeria monocytogenes, in unpasteurized dairy products and deli meats, Escherichia coli in the elderly and newborns, and Mycobacterium tuberculosis.

Also called aseptic meningitis, this form is caused in most cases by enteroviruses which gain entry through the mouth and travel through the bloodstream to the brain and meninges. These may be caught from a person who is infected or from objects which carry the viruses.
Aseptic meningitis may also be caused by viruses that also cause varicella zoster, mumps, influenza, herpes simplex Type 2, or HIV, among others.

In a few cases, cerebral malaria and cysticercosis may cause meningitis. Cysticercus is a tapeworm infestation which is infamous for causing encystment of the parasite within various body tissues, including the brain. Amebic meningitis may sometimes occur, occasionally after swimming in freshwater which contains the ameba Naegleria fowleri, and though rare, it is often fatal within a short period of time.

Other causes of meningitis include adverse reactions to certain medications or therapies, autoimmune inflammatory diseases such as systemic lupus erythematosus, certain cancers, and trauma to the head and the spine.