A research group that began as a collaboration between a mentor and his mentee in the early 1980s has harnessed decades of Fogarty and NIH support to spawn collaborations that span generations, and have trained hundreds of scientists and medical professionals. The Haitian Group for the Study of Kaposi's Sarcoma and Opportunistic Infections, which is known by its French acronym, GHESKIO, has grown into one of the world's preeminent research organizations for HIV/AIDS, shaping global health guidelines and, on a local level, helping increase longevity in Haiti by more than a decade. And because of GHESKIO's mentorship-driven research culture, an HIV diagnosis is no longer considered a death sentence in Haiti and HIV prevalence in the country has been dramatically reduced. 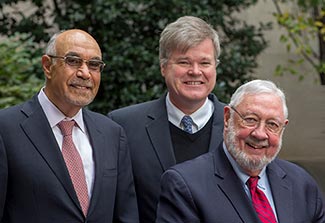 Photo by Bahare Khodabanda, reproduced with permission
from Weill Cornell Medicine
Three generations of Fogarty-supported mentors and
mentees - from left, Drs. Jean "Bill" Pape, Dan Fitzgerald
and Warren Johnson - have transformed research in Haiti.
GHESKIO is the product of the relationship between a mentor - Dr. Warren Johnson of Weill Cornell Medical College - and his mentee, Dr. Jean "Bill" Pape, who as a student at Weill Cornell in the 1970s sought out Johnson as an adviser. The partnership between the two has endured to this day, helping to grow GHESKIO from what was essentially a two-man endeavor in the early 1980s to a globally respected, innovative research organization that has produced multiple generations of scientists whose research has helped change the face of global health.
"Fogarty has been central to GHESKIO's success," said Pape, who was himself a Fogarty trainee. "We've had continuous NIH funding since 1983, and Fogarty support since 1988, the year the AIDS International Training and Research Program (AITRP) was launched. By piggybacking Fogarty support on existing grants, we've been able to give on-the-job training to several generations of researchers."
Johnson and Pape have mentored more than 100 Haitian scientists through Fogarty programs in the U.S. or in the Caribbean island nation. Most of their mentees have returned to Haiti to work - or never left in the first place - and published hundreds of papers, some documenting groundbreaking research that has led to changes to global health guidelines and practices. In 1993, for example, GHESKIO researchers were the first to determine that isoniazid prophylaxis was effective in preventing TB in HIV-infected patients, and that it helped to prevent recurrence of TB, said Pape. "Twenty years later, the WHO said primary isoniazid prophylaxis was one of the most cost-effective interventions in people coinfected with HIV and TB," he said.
GHESKIO researchers also authored a study that found that infants born with HIV in Port-au-Prince were six times more likely to die in the initial six months of life than babies born with the virus to Haitian mothers in Miami. That study was one of the first to indicate that factors such as malnutrition, poverty and environmental conditions in developing countries played a greater role in early HIV-related mortality than maternal factors, such as ethnicity, or HIV strain. 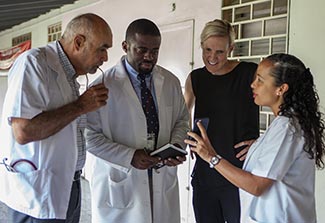 Photo by Bahare Khodabanda, reproduced with permission
from Weill Cornell Medicine
Years of mentorship at GHESKIO and Weill Cornell have
helped train scores of Haitian researchers with Fogarty support.
Fogarty trainees also played a key role in a landmark study conducted by GHESKIO in Haiti in the early 2000s, when international funds for antiretroviral therapy (ART) became available in low- and middle-income countries. GHESKIO researchers provided ART to Haitians, in spite of warnings from some scientists in developed countries who thought that poor adherence and patchy access to the drugs could result in a strain of ART-resistant HIV. The results of the GHESKIO study were stunning: a year after starting on ART, nearly 90 percent of adults and teens and 98 percent of children were still alive, in contrast to 30 percent who survived beyond a year before ART became available. The 10-year survival rates were around 70 percent - comparable to the U.S., even though Haitians presented later with the disease, were much sicker and often severely malnourished.
Like many developing countries, Haiti has a heavy disease burden, including the highest prevalence of HIV infection in Latin America and the Caribbean. Having a broader pool of infected people to study than in the U.S. allows researchers in countries like Haiti to produce results more quickly - and those results are just as useful to Americans and Europeans as they are to Haitians. GHESKIO has grown into "one of the largest AIDS centers in the Americas," said Pape. "We have in our network 33,000 patients on antiretroviral therapy - more than a third of all HIV patients in Haiti - and every year we diagnose and treat about 3,000 patients with TB. So Haiti is an ideal place for young researchers who want to study AIDS, TB and other diseases."
One such researcher was an American who in the mid-1990s was working as a primary care physician in Haiti's Central Plateau region. "I was taking care of many people with advanced HIV/AIDS, and when I had questions about best practices for people with AIDS, a colleague suggested that I ask Dr. Jean Pape, who was already globally recognized as an expert in the field," Dr. Dan Fitzgerald said. "So, several times, I drove from rural Haiti to Port-au-Prince to meet Dr. Pape, ask him questions and run cases by him. In the course of doing that, I learned about his work and decided I wanted to follow in his path."
Awarded a Cornell infectious diseases fellowship in 1998, Fitzgerald began research training in Haiti, with Pape as his mentor. The following year, Fitzgerald received a prestigious Fogarty International Research Scientist Development Award (IRSDA), which provides U.S. research scientists with support and protected time to conduct research in a low- or middle-income country. With Pape as his mentor in Haiti and Johnson in the U.S., Fitzgerald used his grant to hone his biomedical and clinical research skills and conduct investigations into, among other things, HIV transmission in discordant heterosexual couples and best practices for informed consent in developing countries. According to Pape, Fitzgerald published one research paper every month "at the same time as doing all the work he was doing." in Haiti.
Like Pape before him, Fitzgerald the mentee eventually became Fitzgerald the mentor. He is the principal investigator on two Fogarty-supported projects that are training the next generation of researchers at GHESKIO. One of the projects, which Fogarty co-funds with the National Cancer Institute, is training a dozen Fogarty scholars, and 21 nurses, lab technicians, data managers, social workers and a pharmacist, in cervical cancer diagnosis and prevention research. The other will provide 10 Haitian clinicians with research training in AIDS-related multidrug resistant tuberculosis, and set up a two-year master's program in laboratory science for eight Haitian trainees.
Between them, the two projects will allow nearly two dozen Haitian clinicians to earn master of public health degrees in Haiti. Once trained, the researchers will help fill large gaps in Haiti, where only 10 percent of MDR-TB patients receive treatment and cervical cancer is a leading cause of death in HIV-infected women.
"The old axiom in medicine is: ‘See one, do one, teach one.' You train one and it just keeps going," said Johnson, who in 2017, passed the mantle of Director of Weill Cornell's Center for Global Health to his former protégé, Fitzgerald. "With Fogarty support, we've been able to mentor and train our own leaders at Cornell-GHESKIO, and they have gone on to train others."
In the last three decades, Haitians' life expectancy has risen by about 10 years, according to World Bank data. "The generations of researchers that Fogarty has helped us to bring through the ranks have improved Haitians' health and allowed them to live to see their grandchildren start school or their children graduate from university," said Pape.
But Haitians living longer has brought a new problem to the country: chronic illnesses are on the rise. "In the slum across the street from GHESKIO's downtown Port-au-Prince office, 48 percent of women are obese," said Pape. "So here's a country that's very poor, that is dealing with an epidemic of infectious diseases but also an epidemic of chronic diseases. With support from Fogarty and generations of researchers, we're armed against both."