By Sally Robertson, BSc
The body’s defence against harmful stimuli or antigens depends on its recognition of those antigens. Recognition is followed by activation of the innate and adaptive immune responses. 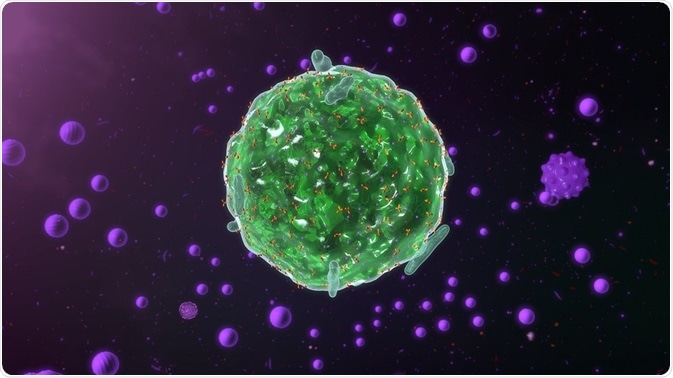 Credit: sciencepics/Shutterstock.com
Initial recognition of antigens is mediated by specific receptors located on monocytes, macrophages and dendritic cells and leads to the production of cytokines. Cytokines are low molecular-weight proteins that serve as chemical messengers to regulate the innate and adaptive immune systems. Cytokines are produced by almost all cells involved in these immune responses, but particularly by T helper (Th) lymphocytes.
The activation of cytokine-producing cells stimulates them to make and secrete cytokines which then bind to cytokine receptors present on other immune system cells to influence their activity. A number of cytokines induce the innate immune response, inflammation and the adaptive immune response.
Further activation of the adaptive immune response depends on cytokine regulation of T-cell differentiation into subsets of T-cells that serve specific functions to defend against harmful stimuli.

Key cytokines in the innate immune response include: TNF-α, IL-1, IL-10, IL-12, type I interferons (IFN-α and IFN-β), IFN-γ, and chemokines.
Tumor necrosis factor alpha
Tumor necrosis factor alpha (TNF-α) is produced by macrophages when they become activated in response to the presence of microbes. It is a key regulator of acute inflammation. TNF-α mediates the recruitment of macrophages and neutrophils to infection sites by triggering the production of adhesion molecules by endothelial cells and the production of chemotactic cytokines. It also acts on the hypothalamus in the brain to generate fever, as well as promoting acute phase protein production.
Interleukin 1
Another inflammatory cytokine produced by activated macrophages is interleukin 1 (IL-1). This cytokine produces similar effects to those of TNF-α and is also involved in the activation of T cells.
Interleukin 10
Activated macrophages produce interleukin 10 (IL-10), which is primarily an inhibitory cytokine. IL-10 is also produced by Th2 lymphocytes. It shifts the immune response from a Th1 type response to a Th2 type response by inhibiting the production of IFN-γ by Th1 cells.
It also prevents activated macrophages from producing cytokines, as well as inhibiting their expression of major histocompatibility complex (MHC) class II molecules and co-stimulatory molecules, which dampens the immune response.

Interleukin 12
Interleukin 12 (IL-12) is produced by activated macrophages and dendritic cells. It triggers the production of interferon gamma (IFNγ) and Th cell differentiation into Th1 cells. IL-10 also enhances the cytolytic functions of cytotoxic T cells and natural killer (NK) cells.
Type I interferons
Many cell types make the type I interferons IFN-α and IFN-β, which inhibit viral replication in cells. They also increase expression of MHC class II molecules on cells to increase their susceptibility to destruction by cytotoxic T lymphocytes (CTLs). In addition, IFN-α and IFN-β activate NK cells.
Interferon gamma
Interferon gamma (INF-γ) is a key cytokine, mainly produced by Th1 cells, that performs multiple functions in both innate and adaptive immunity. It may also be produced to a lesser degree by Tc and NK cells.
Chemokines
Chemokines are a large family of chemotactic cytokines that are produced by numerous leukocytes and other types of cells. They recruit leukocytes to infection sites and are also involved in lymphocyte trafficking.

Key cytokines in the adaptive immune response include: IL-2, IL-4, IL-5, TGF-β, IL-10 and IFN-γ.
Interleukin 2
Interleukin 2 (IL-2) is the key growth factor for T cells. It is produced by Th cells and to a lesser degree by Tc cells. IL-2 also induces the growth of B cells. In addition, it can activate monocytes and NK cells.
T cell activation by an antigen results in expression of the IL-2 receptor (IL-2R) and the production of IL-2. IL-2 binds to the IL-2R and stimulates cell division. When T cells are no longer being activated, the IL-2R eventually decays and T cell proliferation stops.
Interleukin 4
Interleukin 4 (IL-4) is produced by Th2 cells and macrophages. It triggers naïve T cells to develop into Th2 cells and stimulates the growth of differentiated Th2 cells. This results in an antibody response being generated and promotes immunoglobulin (Ig) class switching to the IgE isotype.
Interleukin 5
Interleukin 5 (IL-5) is produced by Th2 cells. It promotes the growth and differentiation of B cells and eosinophils and activates mature eosinophils.
Transforming growth factor beta
Transforming growth factor beta (TGF-β) is primarily an inhibitory cytokine and is produced by T cells, as well as many other types of cell. It inhibits T cell proliferation and macrophage activation.  It also acts on polymorphonuclear leukocytes (PMNs) and endothelial cells to stop the effects of pro-inflammatory cytokines.
Although cytokine regulation of inflammation and immunity is essential for defending against infection and injury, excess cytokine production or activity leads to acute or chronic inflammation, which can eventually lead to various autoinflammatory and autoimmune conditions.
Reviewed by Chloe Barnett, BSc