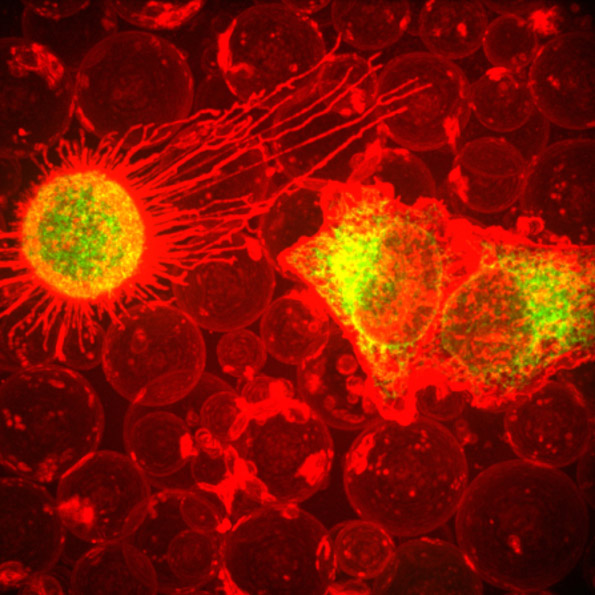 Cells are in the process of pinching off parts of their membranes to produce bubbles filled with a mix of proteins and RNAs. Researchers are harnessing this process to develop better drug delivery techniques. The image, courtesy of Chi Zhao, David Busch, Connor Vershel and Jeanne Stachowiak of the University of Texas at Austin, was entered in the Biophysical Society’s 2017 Art of Science Image contest and featured on the NIH Director’s Blog.
This fiery-looking image shows animal cells caught in the act of making bubbles, or blebbing.
Certain cells regularly pinch off parts of their membranes to produce bubbles filled with a mix of proteins and RNAs. The green and yellow portions in the image show the cell membranes as they separate from the cell’s skeleton and bleb from the main cell. The bubbles, shown in red, are called plasma-derived membrane vesicles, or PMVs. PMVs can travel to other parts of the body where they may aid in cell-to-cell communication.
The University of Texas at Austin researchers who produced this image are exploring ways to use PMVs to deliver medicines to precise locations in the body.
Blebbing for Drug Delivery
Drug delivery research tries to find ways to carry medicines to only the tissues in the body that need them with the goal of reducing side effects. To achieve this, delivery methods need to recognize just the cells they target, usually by finding a unique protein on the cell’s surface. Scientists can make proteins that recognize and attach to targets such as cancer cells, but they’ve had trouble attaching medicines to the proteins they made. To get around this problem, scientists could employ PMV-making cells in a laboratory, perhaps even cells taken from a patient who is receiving treatment. They could engineer the cells to make the targeting proteins and then attach the targeting proteins to the PMV surface. The cell’s own protein-making machinery does the hardest job.
The Texas scientists have engineered such donor cells with proteins on their surfaces that precisely target certain kinds of breast cancer cells. When the donor cells are induced to bleb, they produce PMVs laden with the target proteins that locate and bind to the cancer cells.
Researchers hope that eventually PMVs with surface targeting proteins could be filled with medicines and infused into the patient to deliver the drugs specifically to cancerous cells while leaving healthy tissues untouched. Research will continue to investigate this possibility.
This research was funded in part by NIH under grant R01GM112065.
Publicado por salud equitativa en 6:59