Ingested or injected pharmaceuticals can target specific molecules involved in disease processes, but get distributed throughout the body where they can cause unwanted side effects. An approach known as electroceuticals aims to avoid systemic exposure by using small wires to electrically monitor and manipulate individual nerves that control organ function and carry information about disease. Despite the promise of electroceuticals, it has been challenging to develop long-term therapies due to the lack of biocompatible wires. Now, NIBIB-funded researches have spun carbon nanotubes into flexible, nerve-sized wires or yarns capable of high-fidelity long-term connections in live animals. The development of these biocompatible yarns opens the possibility of new bioelectric diagnostics and therapies through regulation of internal organ function at the single nerve level. 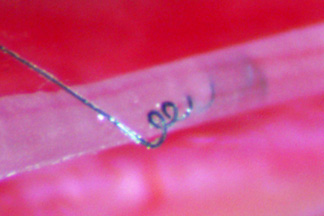 Carbon nanotube yarn embedded into the vagus nerve of a rat. Credit: McCallum et al, Sci. Rep. 20171
All the organs of the body such as the heart, lungs, liver, and kidneys are automatically controlled by nerves that stretch from the brainstem to each organ. These nerves control organ functions such as heartbeat, breathing rates, and blood pressure, making constant adjustments in response to environmental and physiological changes. Variations in the electrical activity in this area of the brain, known as the autonomic nervous system, can also be predictors, indicators or causes of disease development.
“Monitoring and manipulating the autonomic nervous system to both understand and potentially treat disease has been an intriguing yet understudied approach to medicine,” explains Michael Wolfson, Ph.D., director of the NIBIB program in Rehabilitation Engineering and Implantable Medical Devices. “This is largely due to technical limitations in being able to insert wires into nerves that can reliably and safely record electrical activity over long periods of time and under different physiological conditions.”
In a study reported in the journal Scientific Reports1, bioengineers at Case Western Reserve University in Cleveland, Ohio describe the development of highly flexible carbon nanotube (CNT) yarn electrodes that were capable of months-long electrical recording in major nerves of the autonomic nervous system in rats. 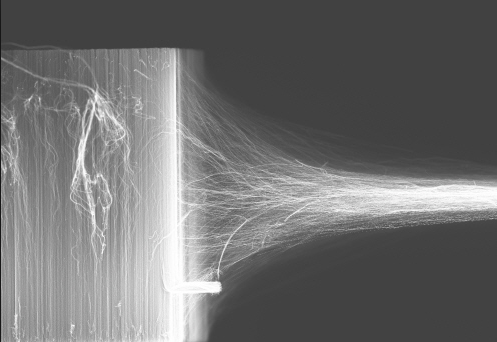 Individual carbon nanotubes are pulled from a substrate and spun into the flexible carbon nanotube yarn. Credit: McCallum et al, Sci. Rep. 20171
The CNT yarns are essentially, just that, yarns made from a “forest” of hundreds of carbon nanotubes that are pulled from the metal surface they are grown on and spun into a highly flexible, highly conductive wire 1/100th the size of a human hair.
Current technologies for recording electrical signals from nerves include relatively large stiff tungsten needles used by neurologists to obtain readings from single nerves of patients for several hours, but must be removed before causing lasting nerve damage. Other wire electrode technologies can record nerve signals for short periods but because of their dimensions and stiff mechanical properties they are not suitable for long-term recording in small nerves.
“The currently available electrode technologies simply do not match the mechanical properties of nerves,” explains Dominique Durand, Ph.D., Professor of Biomedical Engineering at Case Western and senior researcher on the CNT yarn work. “With those types of electrodes, it’s often like sticking glass into spaghetti. Our CNT yarns are similar in size and flexibility to actual nerves. These properties allow them to be stealthily inserted into specific nerves and remain there for months without destroying the tissue or inducing an attack by the immune system.” 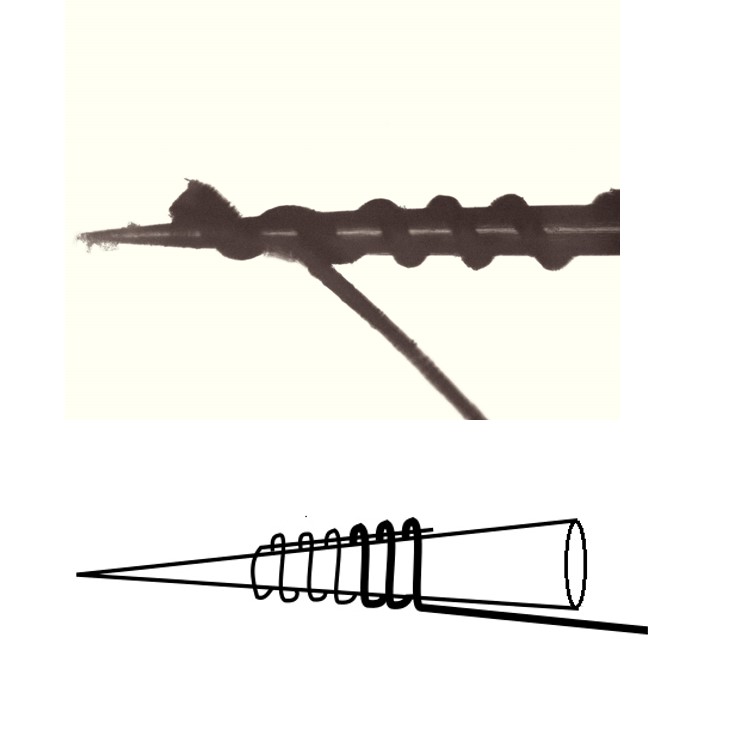 The carbon nanotube yarn is wound around a tungsten needle for insertion into a nerve. The coiling of the yarn causes it to remain solidly embedded in the nerve after the needle is withdrawn. Actual needle and yarn (top). Diagram showing detail of how yarn is wrapped around the needle for insertion (bottom). Credit: McCallum et al, Sci. Rep. 20171
The combination of the biocompatibility of the CNT yarns and their outstanding ability to carry an electrical signal that is 10 times stronger than current technologies makes them ideal for long term recording of specific nerve signals. Finally, the lack of nerve damage keeps the surrounding axons intact, which helps to eliminate background noise. Thus, the CNT yarns have an excellent signal to noise ratio (SNR), which is critical for this type of research.
The group tested the CNT yarns in two major nerves in the autonomic system in rats. One study involved the vagus nerve, which stretches throughout the body to connect to numerous organs. The nerve is known to control and monitor a range of functions including heart rate, digestive tract movement, sweating, and immune response.
CNT yarn electrodes were also inserted into the glossopharyngeal nerve. The nerve is connected to a number of organs including the carotid artery, and parts of the ear, tongue and salivary glands where it is known to be involved in swallowing.
In both nerves, recordings of stable electrical activity were maintained over a 10-week period. Pulses of nerve activity were also monitored while the animal responded to physiological challenges. The challenges included distension of the rat’s stomach with saline solution, and short durations where the rats were in low oxygen environments. In each case, the physiological changes induced by the challenge resulted in easily detectable changes in electrical activity that were recorded using the CNT yarn implants over the entire 10-week period of the experiments. 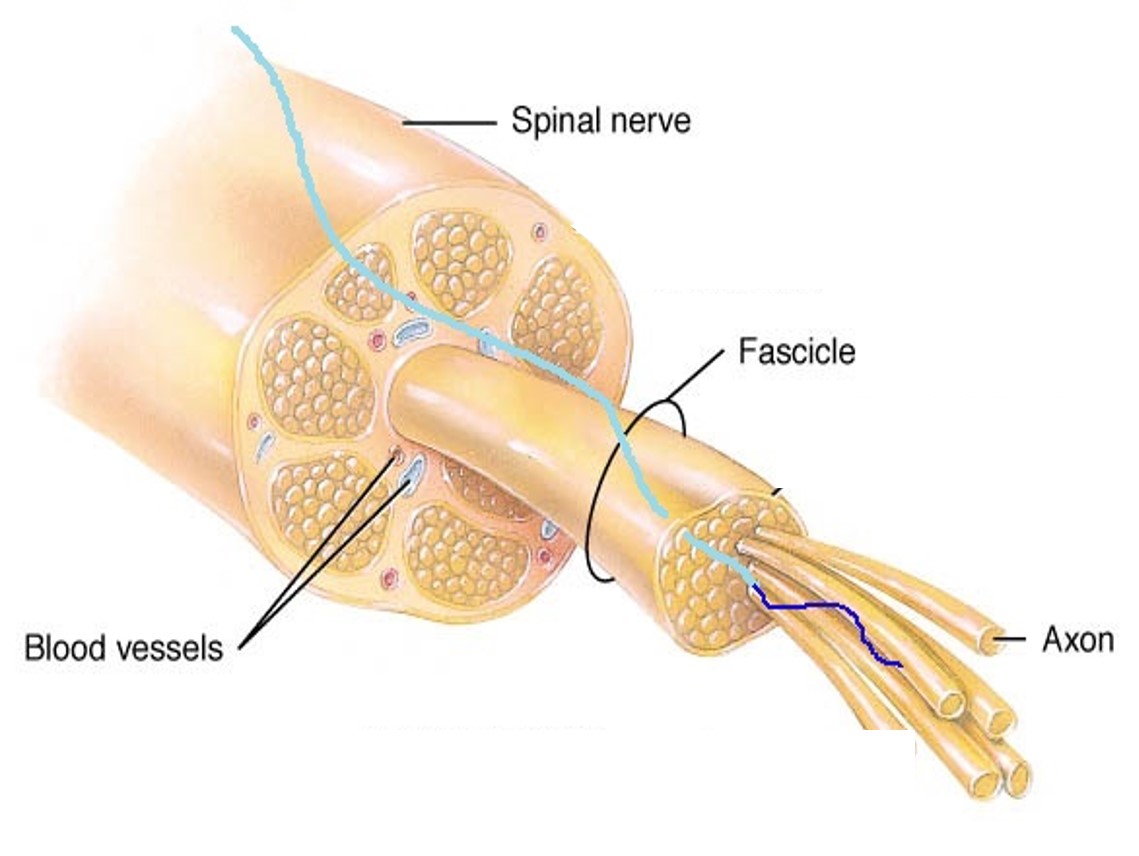 Diagram of carbon nanotube yarn (blue) and site of insertion into one of the many axons that make up a spinal nerve. Credit: GA McCallum, Case Western Reserve University
“Although this is early research, we believe the results demonstrate that this technology can be used for reliable long term electrical monitoring of physiological functions,” says Durand. “This is an important step in pursuing monitoring of disease progression through the nerves that control the function of the diseased organ.”
Durand explains that the goal is to learn what electrical signatures or profiles are indicative of disease development and to use that for early intervention, potentially by electrical stimulation or even blocking of the nerve. For example, one therapy for severe hypertension is the cutting of the renal nerve. This is obviously irreversible. Durand, explained that CNT yarn electrodes could be used to block the nerve impulse without cutting the nerve, making the treatment reversible.
The group is also excited about the potential of this recording method to improve prosthetics. “When an arm has been amputated there are tens of thousands of neurons remaining,” said Durand. “The approach would be to insert the CNT yarns into individual nerves and record the electrical signals that are created as the individual thinks about moving the missing arm—essentially learning the electrical signals that are formed by the intention to move the arm.” The ultimate goal is to develop neural interfaces capable of translating those electrical signals into better control of the prosthetic by the user.
The work was supported through grant U18EB021759 from the National Institute of Biomedical Imaging and Bioengineering, and GlaxoSmithKline – Bioelectronics Medicine Innovation Challenge.
The collaboration included researchers from the Neural Engineering Center, Department of Biomedical Engineering, and the Department of Macromolecular Science and Engineering at Case Western Reserve University, Cleveland, OH; and the School of Biomedical Engineering, Shanghai Jiao Tong University, Shanghai, China.
1. Chronic interfacing with the autonomic nervous system using carbon nanotube (CNT) yarn electrodes. McCallum GA, Sui X, Qiu C, Marmerstein J, Zheng Y, Eggers TE, Hu C, Dai L, Durand DM. Sci Rep. 2017 Sep 15 (creative commons.org)
Program Area:
Rehabilitation Engineering and Implantable Medical Devices
Health Terms:
Therapeutic
Division:
Division of Discovery Science & Technology (DDST)
Publicado por salud equitativa en 7:17