The HHS Office on Women’s Health (OWH) knows how important it is for you to have the latest information on prevention and treatment to help you best serve your patients.Each month, we will share a curated list of tools and resources that you can immediately put into practice.

Sexual Assault Awareness — News You Can Use

Sexual violence has a significant and long-term physical and mental health impact on victims. Understanding the populations at risk is critical to providing patients the support they need.
A Centers for Disease Control and Prevention (CDC) report of data from 2010–2012 found that 1 in 3 women in the U.S. has experienced some type of sexual violence, which is defined as “numerous violent behaviors, including contact (e.g., forced penetration, unwanted fondling) and non-contact (e.g., verbal harassment) acts.” There are nuances to sexual violence reporting, however, as indicated by a more current report released by the Bureau of Justice Statistics (BJS) which found that 1.9 per 1,000 women experienced rape/sexual assault, based on a 2016 study. The BJS acknowledges that the measurement of rape and sexual assault presents challenges for many reasons, including victims’ reluctance to share their experience and inconsistent definitions of rape and sexual assault.
While sexual violence is an important public health concern for everyone, women and racial and ethnic minorities are most affected. In this issue, we highlight just three of the groups facing unique challenges when it comes to sexual violence: women veterans, Native American women, and undergraduate women. 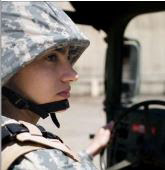 According to recent data, about 1 in 4 women veterans has experienced military sexual trauma (MST). MST is the term that the U.S. Department of Veterans Affairs (VA) uses to refer to sexual assault or repeated, threatening sexual harassment that occurred while the veteran was in the military. To learn more about MST, programs, and services that support MST victims, and community provider resources, visit the VA’s Military Sexual Trauma webpage and Sexual Assault Against Females webpage.