Alkhurma hemorrhagic fever virus RNA was detected in immature Hyalomma rufipes ticks infesting northward migratory birds caught in the North Mediterranean Basin. This finding suggests a role for birds in the ecology of the Alkhurma hemorrhagic fever virus and a potential mechanism for dissemination to novel regions. Increased surveillance is warranted. 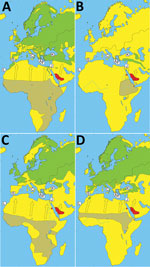 Figure 1. Wintering (light brown) and breeding (green) locations and springtime migratory routes (arrows) of birds testing positive for Alkhurma hemorrhagic fever virus (AHFV) RNA in Greece and Turkey, 2010 and 2014. The...
Alkhurma hemorrhagic fever virus (AHFV) was identified in 1995 after an outbreak of viral hemorrhagic fever in Jeddah Province, Saudi Arabia (1). This virus is a variant of Kyasanur Forest disease virus (KFDV), which is endemic in eastern India, and a member of the mammalian tickborne flaviviruses (2). An association between Alkhurma hemorrhagic fever cases and livestock handling was identified early on, suggesting goats and sheep are potential reservoirs (3). Furthermore, AHFV has been identified in Ornithodoros savignyi soft ticks and Hyalomma dromedarii hard ticks (potential vectors) in Saudi Arabia, both of which are associated with camels (potential reservoir) (4,5). Alkhurma hemorrhagic fever is endemic in several provinces of Saudi Arabia; sporadic cases have been reported in Africa near the Egypt–Sudan border and cases of seropositivity in Djibouti (6–8) (Figure 1). AHFV RNA has also been detected in Amblyomma lepidum ticks collected from cattle in Djibouti (9).
The clinical manifestation of Alkhurma hemorrhagic fever resembles that of other viral hemorrhagic fevers: initial malaise and influenza-like symptoms, followed by encephalitis, icterus, and ecchymosis. Case fatality is ≈25% but could be considerably lower, considering mild cases are probably undiagnosed (1). It has been suggested that both KFDV and AHFV originated in Africa and that, subsequently, KFDV spread to India and AHFV to Saudi Arabia, KFDV possibly disseminating farther to southern China by migratory birds (2). Also, other pathogens have been found to disseminate by means of ticks on migratory birds (10). In light of these findings, case reports in Africa (6–8), and increasing case frequency in Saudi Arabia (11), we investigated whether ticks infesting migratory birds en route from Africa to Europe and Asia during springtime carry AHFV.

We detected AHFV/KFDV RNA in 6 of 1,771 investigated ticks. Although we could not differentiate between KFDV and AHFV on the basis of the short sequences analyzed, we suggest these sequences represent AHFV because this supposition is geographically and ecologically more plausible. Our findings are insufficient to establish the role of the H. rufipes tick as an AHFV vector. However, detection of AHFV RNA in Europe and Asia Minor raises concerns for conceivable dissemination of the virus to these areas, facilitated by climate change resulting in increased distribution of Hyalomma spp. ticks.
H. rufipes ticks are widely distributed in Africa and are also present on the Arabian Peninsula, along the Red Sea coast (13). The H. rufipes species is a 2-host tick; that is, the nymph remains attached to ingest blood on the same host it did for its first blood meal as a larva. Immature ticks usually infest birds or small mammals (e.g., hares), whereas adult ticks feed on larger mammals (e.g., camels, buffaloes, cattle, and large birds) (13). Consequently, the AHFV-positive ticks (except the 1 adult) most likely had fed only on the bird to which they were attached. This assumption implies that an immature tick could have acquired the virus vertically from its mother, from its putatively viremic avian host, or by co-feeding transmission, which can occur when ticks feed close to >1 infective tick (14,15). However, in this case, co-feeding transmission is less plausible because the 2 ticks attached to the same bird were not located close to each other (on the beak and nape). For several tickborne viruses, including KFDV, vertical transmission from the adult female tick to the eggs occurs. However, the prevalence of transovarial infection in nature is considered low (14). The 1 positive adult tick could have acquired virus in any of these ways or from a previous mammalian blood meal.
To our knowledge, birds have not been shown to play a role in the ecology or epidemiology of AHFV, and this tick species has not been identified previously as a possible vector. Our finding of this virus in ticks infesting birds en route from Africa to Europe and Asia, together with clinical cases in southern Egypt, the detection of AHFV RNA in ticks, and cases of seropositivity in Djibouti, could indicate a wider geographic distribution of the virus throughout eastern Africa and in novel regions. Further investigations of AHFV ecology and modes of transmission, including the potential role of Hyalomma ticks as vectors and passerine birds as reservoirs or distributors of potentially infected ticks, as well as increased surveillance, are needed.
Top
Ms. Hoffman is a doctoral student at the Zoonosis Science Center, Department of Medical Science, Uppsala University, Uppsala, Sweden. She has a background in infection biology and a special research interest in vectorborne infections, particularly the potential role of migratory birds in the transmission of tickborne pathogens.
Top

We thank Dario Piacentini, Laura Gangoso, Rafael Gutierrez, Manuel Vazquez, Jose Luis Arroyo, Alberto Pastoriza, and all others involved in the tick collections and Peter Wilhelmsson for sample organization.
Ondokuz Mayis University (project no. PYO.ORN.1901.15.001) financially supported the ringing activity at the Kizilirmak Delta. P.-E.L. was supported by the EU-Interreg program, ScandTick Innovation project, and J.F. was supported by RNM-7038 project from Junta de Andalucía. T.G.T.J.’s research is funded by the European Centre for Disease Prevention and Control and the European Food Safety Authority (via VectorNet), Carl Trygger’s Stiftelse, Helge Axson Johnson’s Stiftelse, Längmanska Kulturfonden, and Magnus Bergvall’s Stiftelse. The Andikíthira Bird Observatory was supported by the A.G. Leventis Foundation. This is publication no. 23 from the Andikíthira Bird Observatory.
Top