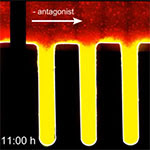 Researchers created an apparatus to study quorum sensing, a communication system that allows some bacteria to cause dangerous infections. Their findings suggest that blocking bacterial communication might lead to a new way to combat such infections. Credit: Minyoung Kevin Kim and Bonnie Bassler, Princeton University.
If you’ve ever felt a slimy coating on your teeth, scrubbed grime from around a sink drain or noticed something growing between the tiles of a shower, you’ve encountered a biofilm. Made up of communities of bacteria and other microorganisms, biofilms thrive where they can remain moist and relatively undisturbed. As they enlarge, biofilms can block narrow passages like medical stents, airways, pipes or intestines.
As a biofilm matures, bacteria within it begin using a chemical communication system known as quorum sensing. This system allows bacterial cells to “sense” their growing population, transmit information throughout the community, and produce virulence factors that transform the relatively harmless individual cells into a coordinated, disease-causing collective.
Quorum sensing is associated with a long list of diseases as diverse as childhood ear infections, pneumonia, food poisoning and skin infections (including the potentially deadly methicillin-resistant Staphylococcus aureus, or MRSA). In developing countries, add to the list cholera and typhoid.
To study how bacteria form biofilms and become virulent using quorum sensing, an interdisciplinary team of researchers at Princeton University developed experimental devices that mimic realistic bacterial settings. The team included microbiologist Bonnie Bassler; a chemistry graduate student who built the devices; another chemistry graduate student who synthesized an “antagonist” molecule that shuts down quorum sensing; and two scientists from the university’s mechanical and aerospace engineering department. The team published its findings in Nature Microbiology

.
One of the team’s experimental devices featured deep wells that mimic the shape of pockets in the intestinal lining. These pockets, called crypts, are known to be invaded by bacteria.
As shown in the video, the research team conducted an experiment using two identical devices. Initially, the devices contained MRSA cells (red) that had not yet started quorum sensing. The bacteria quickly multiplied, filling the wells. They also began quorum sensing (yellow). About halfway through the experiment (at 16 hours), the wells of both devices were spilling over with MRSA cells, all of which were engaged in quorum-sensing (green).
The researchers then added the antagonist molecule to the device on the left. Within 6 hours, the antagonist had quashed quorum sensing (bacteria become red again). Presumably, along with their quorum sensing ability, these bacteria had also lost their virulence.
In the device on the right, MRSA cells continued to engage in quorum sensing—and, the scientists believe, in pumping out virulence factors.
The research team also figured out why biofilms develop most readily in secluded spots, say, the curves of a catheter, a child’s Eustachian (ear) tube or the bottom of their experimental wells. In such places, protected from the blast of passing fluids, virulence factors and other quorum-sensing messages aren’t washed away.
These findings suggest a new way of targeting biofilms, which are notoriously difficult to eradicate: Instead of aiming to destroy the biofilm structures themselves, just manipulate the communication lines. If the strategy works in living organisms—which will take time and research to determine—interfering with quorum sensing might be an effective way to combat MRSA and many other bacterial infections.
This work was funded in part by NIH under grant R01GM065859.
Publicado por salud equitativa en 12:13