By Tomislav Meštrović, MD, PhDReviewed by Liji Thomas, MD
Farmers, land managers and people who enjoy outdoors recreation are at increased risk of tick exposure and, consequently, of acquiring infection with tick-borne pathogenic bacteria.
Human ehrlichiosis is a potentially fatal condition that belongs to this group comprising two similar clinical entities – human monocytic ehrlichiosis (caused by Ehrlichia chaffeensisand Ehrlichia canis) and human granulocytic anaplasmosis (primarily caused by Anaplasma phagocytophilum).
Although the causative species may differ, all forms of human ehrlichiosis have many clinical and laboratory manifestations in common. Due to rare fatal outcomes, treatment with a tetracycline should be instituted as soon as empirical diagnosis has been rendered – even without a confirmatory laboratory test. However, the exact diagnosis should be pursued whenever possible, and there are several different laboratory approaches at the physician’s disposal. 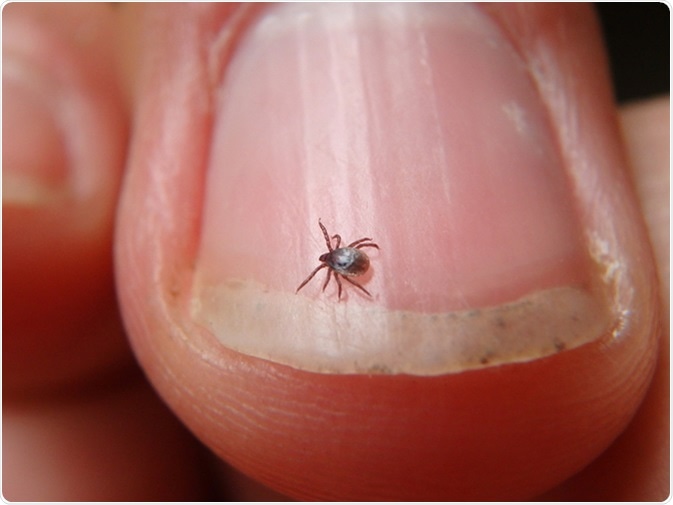 Pancytopenia (i.e. an abnormally low count for all three types of blood cells) is a hallmark laboratory finding of human ehrlichiosis during the early days of the disease.
Anemia is typically observed within two weeks of illness in 50% of patients, whereas 70% patients present with mild or moderate leukopenia (with the most significant decline being in the lymphocyte population) during the first week. Low platelet count and elevated liver transaminases are also frequently noted.
The next step towards accurate diagnosis is making blood smears from peripheral blood, cerebrospinal fluid or bone marrow, which are stained with Giemsa or Wright’s stains to detect specific bacterial structures known as morulae.
Albeit this technique is rapid, it is rather insensitive in comparison to other confirmatory tests, and particularly in immunocompetent patients who have extremely low bacterial loads in blood and body organs.

The Use of Serology

The most sensitive method of infection confirmation is a seroconversion or a 4-fold change in antibody titers during the convalescent phase of the disease.
Specific serologic testing of IgM and IgG antibodies to Ehrlichia chaffeensis or Anaplasma phagocytophilum by means of indirect immunofluorescence assay is considered the “gold standard” and thus the most frequently employed confirmatory test.
Nonetheless, serology has its limitations, and these include a negative IgG test and uninformative levels of IgM titers in 80% of affected individuals during the first week of the disease, a high false positive rate, seroconversion failures due to weak immune function, as well as alteration of antibody response because of early antibiotic treatment.

Due to high specificity and sensitivity values, as well as a very rapid turnaround time, polymerase chain reaction (PCR) became the preferred test for confirming serology findings indicative of human monocytic ehrlichiosis and human granulocytic anaplasmosis.
The use of PCR is especially important in the detection of early stages of infection, when antibody levels are low or undetectable.
A large number of kits are commercially available for whole blood PCR testing, which enables rapid diagnosis in up to 85% of infected individuals. Recent advances in molecular research even allow multiplex testing that can identify several agents of ehrlichiosis from one test.

Although the possibility of culturing Ehrlichia and Anaplasma species is also available to clinicians and researchers, the isolation of these organisms requires cell lines and typically takes 2-6 weeks of incubation.
The sensitivity of this approach for the isolation of Ehrlichia chaffeensis is very low when compared to PCR, but higher (and almost comparable to PCR) for Anaplasma phagocytophilum.
The major pitfall of the laboratory culture approach is the paucity of competent laboratories, since this technique necessitates unique and antibiotic-free cell culture methods that are not usually available in clinical microbiology laboratories.
In addition, prior treatment with doxycycline or some other antimicrobial drugs lowers the sensitivity of culture to a greater degree when compared with blood smear analysis or PCR.

This is another confirmatory technique and is especially valuable when the diagnosis is to be made before antibiotic treatment is begun, or at least within 48 hours of its initiation. It can also be applied to bone marrow and autopsy specimens.
All those factors have to be taken into account when assessing patients with suspected ehrlichiosis, which is the reason why some propose combining different diagnostic methods to increase the likelihood of early diagnosis. Naturally, clinicians always have to consider other diseases that have similar clinical and laboratory findings to ehrlichiosis.