By Kate Bass, B.Sc.Nov 29 2018Reviewed by Kate Anderton, B.Sc.
Researchers at the University of Cambridge have used organoid culture techniques to create a cellular model of the early stages of the placenta. It is hoped that this will further our understanding of the initial stages of pregnancy and the etiology of various reproductive disorders. 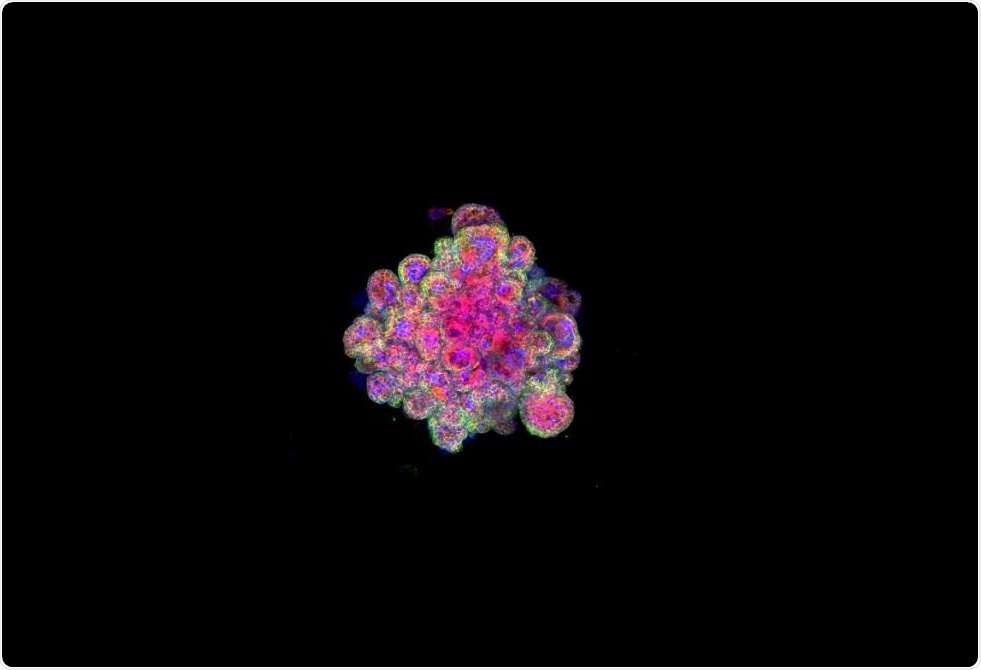 This is a confocal image of a trophoblast organoid stained for cytokeratin 7, F-actin and Dapi. (Credit: Centre for Trophoblast Research).
The placenta is an organ that develops during early pregnancy. It attaches to the wall of the uterus, and the umbilical cord arises from it.
All of the oxygen and nutrients needed by the fetus to grow are supplied through the placenta and waste products are removed via the same route. Failure of the placenta to develop properly can result in a range of complications, including the offspring being still-born.

The placenta is absolutely essential for supporting the baby as it grows inside the mother... When it doesn't function properly, it can result in serious problems, from pre-eclampsia to miscarriage, with immediate and lifelong consequences for both mother and child. But our knowledge of this important organ is very limited because of a lack of good experimental models."
Dr. Margherita Turco, First Author

Unsuccessful pregnancies are commonly the results of the embryo being unable to implant correctly and form a placental attachment.
Although it is known that placental failure is a common cause of infertility, the underlying causes of such failure remain elusive. This is largely a consequence of the difficulties of studying the initial stages of pregnancy.
Since they cannot be studied, very little is understood about what normally happens during this very early period of our development and how it can go wrong. Unfortunately, animal models are of little help since the processes of placental development and implantation are too dissimilar to humans.
The University of Cambridge is a world leader in organoid research and has created a range of organ models, including 'mini-brains', 'mini-livers' and 'mini-lungs'. They have now used the technique to generate 'mini-placentas' that are functional models of the early placenta.

These 'mini-placentas' build on decades of research and we believe they will transform work in this field. They will play an important role in helping us investigate events that happen during the earliest stages of pregnancy and yet have profound consequences for the life-long health of the mother and her offspring.
The placental organoids may help further understanding of the relationships between the placenta, the uterus and the fetus and provide a means for screening the safety of drugs used in early pregnancy.
The team has already created a miniature functional model of the uterine lining and reported how cells at the junction of the uterus and placenta talk to each other to modify the immune response and enable the pregnancy.

Now that we've developed organoid models of both sides of the interface - maternal tissue and placental tissue - we can start to look at how these two sides talk to each other".
Professor Ashley Moffett, Co-author