By Damien Jonas Wilson, MD, BASc.Eng.Reviewed by Ananya Mandal, MD
Cancer of the gallbladder is a rare gastrointestinal (GI) tract pathology that must be diagnosed by clinical tests as its symptoms overlap with those of other GI tract conditions, such as biliary colic and gallstones. 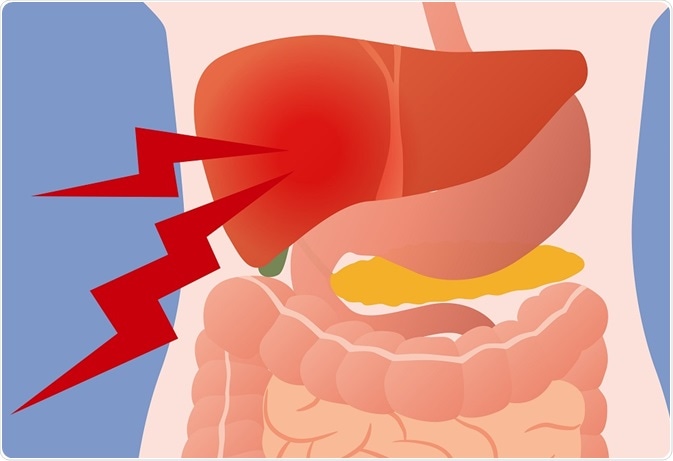 The gallbladder is positioned just beneath the liver and is a small organ, which resembles a pouch. It is responsible for the storage of bile, which is a liquid substance produced by the liver that aids in the digestion of fats.
A patient with gallhbladder cancer may present with signs and symptoms that include, but are not limited to abdominal pain, particularly in the right upper quadrant (RUQ), and bloating, as well as fever, nausea, unintentional weight loss, loss of appetite, and jaundice, which is yellowing of the skin and eyes.
Jaundice together with unintentional weight loss and anorexia are particularly concerning, because they often times indicate that the disease has advanced to its later stages.
While there are no pathognomonic features of gallbladder cancer, there are signs that may help to slightly distinguish it from other pathologies that mimic its symptoms. For instance, the abdominal pain associated with cancer of the gallbladder tends to be a bit more perfuse and persistent, which is in contrast to the more classic RUQ of gallbladder stones.
Patients with cancer of the gallbladder may also have a palpable mass that is located in the RUQ of the abdomen. This is medically referred to as Courvoisier sign, and it is the enlarged gallbladder that is felt on palpation. In addition to Courvoisier, patients may have what are referred to as Sister Mary Joseph nodes, which is lymphadenopathy in the periumbilical area.
Moreover, patients may also have adenopathy of left-sided supraclavicular nodes (i.e. Virchow’s nodes). An additional finding includes Blumer shelf, which is a palpable shelf felt during digital rectal examination and is an indication of tumor metastasis to the pouch of Douglas.

How soon do gallbladder cancer signs and symptoms appear?

Gallbladder cancers are notoriously difficult to detect early. These cancers usually do not cause symptoms in their early stages, and this is particularly unfortunate, because cancer of the gallbladder is significantly more treatable in its early phases. Moreover, by the time that symptoms manifest and diagnosis is made the cancer has most often already advanced to its later stages and there is metastasis.