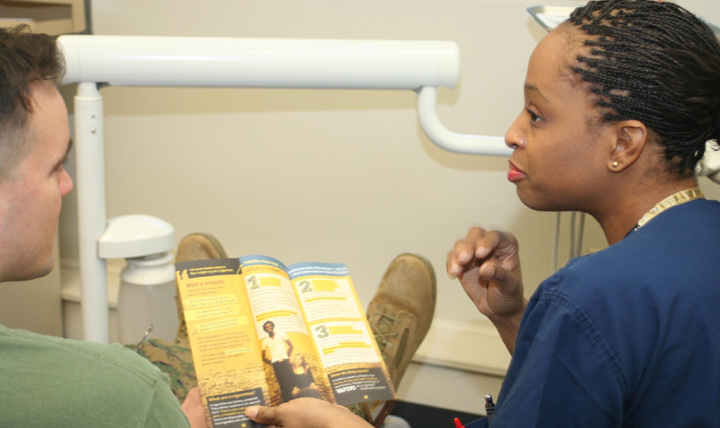 
If you plan on making kicking the tobacco habit a New Year’s resolution, get a jump-start with the Great American Smokeout Nov. 16. The annual event encourages tobacco users to abstain for 24 hours, with the idea that one day will lead to another and then another, putting people on the path of quitting altogether.
To support those who aim to quit, the Department of Defense has relaunched Quit Tobacco – UCanQuit2’s live chat feature. Quit-Tobacco – UCanQuit2 is an educational campaign on tobacco cessation for U.S. service members that began about 10 years ago. Users, including Military Health System beneficiaries and veterans, can click on the live chat bar on the web page to access personalized and private support from coaches as well as information on topics such as dealing with cravings and withdrawal symptoms.
The educational campaign also offers a text message support program for those trying to kick the habit. Sign up by texting MIL to 47848 from your mobile phone, and then answering some questions.
“Many young, healthy service members are using tobacco, and that has a huge impact on readiness,” said U.S. Public Health Service Capt. Kimberly Elenberg, director of Joint Force Fitness, Office of the Undersecretary of Defense for Personnel and Readiness.
The potential health risks of tobacco use are well-documented. They include cancer, heart and lung diseases, and diabetes. Tobacco use also increases the risk of some eye diseases and immune system problems, according to the Centers for Disease Control and Prevention, and it can cause erectile dysfunction. On average, smokers die 10 years earlier than nonsmokers, the CDC says.
DoD spends about $1.6 billion annually on tobacco-related medical care, and tobacco use remains higher in the military than in the civilian population. MHS defines tobacco-free living as avoiding all types of tobacco products, including cigarettes, cigars, smokeless tobacco (chewing tobacco and snuff), pipes, and hookahs, and also striving to live free from secondhand smoke exposure.
While the health risks are known, addiction for many people proves to be too powerful to break. One study found that 59 percent of smokeless tobacco users at Fort Bragg, North Carolina, tried and failed at quitting. About 77 percent of the users believed smokeless tobacco is at least as harmful as cigarettes but continued using anyway. And while half of the smokeless tobacco users came into the military with the habit, the other half picked it up during basic training or shortly afterward.
“UCanQuit2 is an outlet for tobacco users to get the support and resources to quit and live healthier lives,” Elenberg said.

How to walk away from tobacco

Dr. Terry Adirim explains why it’s important for heart health to know your family history and know how you can affect your future
Recommended Content:
Heart Health | Tobacco-Free Living

Smokeless Tobacco Use in the US Military

Presentation
11/1/2016
Smokeless Tobacco Use in the US Military briefing to the Defense Health Board, Nov. 1, 2016.
Recommended Content:
Tobacco-Free Living

Healthy hearts part two: Tobacco and its effects on your heart

During February, the Military Health System recognizes the need for good heart health. In the second article in our series, we talk about the effects tobacco has on the heart and blood vessels.
Recommended Content:
Tobacco-Free Living | Heart Health

Healthy hearts: It all starts with lifestyle

February is Heart Health Month for the Military Health System. In the first in our series, we look at the risk factors that affect heart health, including the things we can affect and those we cannot.
Recommended Content:
Nutrition | Physical Activity | Tobacco-Free Living | Heart Health