Biophotonics is a branch of science where the interaction between biological substances as well as light is used for probing, manipulating and imaging cells and tissues. This emerging technique is widely used in various fields such as medicine, agriculture, and in studies related to life science and environment. 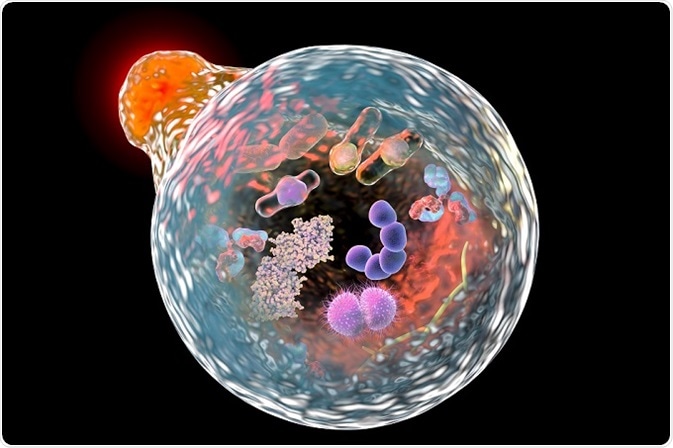 ©​ Kateryna Kon/Shutterstock.com
In cytological studies (also known as study of cell biology), this technique is used for the analysis of structure, functions, components, and life history of various cell samples. The biophotonic tools like flow cytometer has a vital role in cell biology studies. Cell ablation, optical trapping, second harmonic imaging and cell transfection are the other methods of biophononics utilized in this field.

A flow cytometer (FC) is a machine-driven instrument that can be used to examine single cell properties i.e., allow only one cell to be analyzed at a time. It can be used to measure the cell granularity, cell size, and to quantify various cell components that include newly synthesized DNA and the total DNA, the number of specific cell surface receptors, gene expression as the amount of messenger RNA for a particular gene, and amounts of transient signaling events and intracellular protein in living cells. Quantities are generally relative, which can also be the number of molecules present inside the cell when complete values are required.
Flow cytometers quantify laser stimulated fluorescence and scattering of light that is focused through a laser beam, from each individual cell. Flow cytometers are most commonly used for immunofluorescence analysis applications.
Before proceeding with flow cytometer measurements, cells are subjected to incubation in a solution that contains a fluorophore-label-attached selection of antibodies. Reactions occur between the antibodies and the antigens on the cell surface and the attached fluorophores indicate antibodies that are present on the surface of the cell.

Cell ablation is considered to be an efficient tool in the analysis of eukaryotic developmental biology. Information about the cell such as fate, origin, and their role in the developing organism can be determined by selective ablation of cells. The advantage of laser-based approaches over chemical or genetic ablation techniques is that the operations can be carried out at any time and in any cell pattern during development.
Improvement in cell ablation systems are most commonly used for studying inductive interactions that take place between the cells in developing embryos. Cell ablation technique is recently used in the treatment of laryngeal, head, and neck malignancies.

An optical trapping is used as a powerful tool in many biological and bio-physical applications. In biophysics, it permits to accurately measure and manipulate various cellular structures. Biological applications of optical trapping include the examination of single cell and cell sorting.
Optical trapping can be created by a laser beam that can be focused with an objective lens that has high numerical aperture. Momentum transferred from the scattered incident photons results in a force that is experienced by a dielectric particle near the laser beam focus.
The resultant of this optical force is resolved into two components: a force in the direction of propagation of light, known as scattering force and a force in the spatial light gradient direction, known as gradient force. This method can be employed in moving subcellular organelles and small cells, with the help of a focused beam.

Laser scanning microscope that is comprised of transmission optics and femtosecond Ti–sapphire laser are involved in live cell imaging based on nonlinear optical phenomena of second harmonic generation (SHG).  Second harmonic imaging (SHIM) is an efficient method for probing live-cell membranes as it offers higher resolution of nonlinear optical microscopy and also prevents photo-toxicity and photo-bleaching.
The approach has been employed on three cell lines that are labeled with membrane staining dyes of high nonlinear optical coefficients. The images can be developed on timescales that are physiologically relevant.
Both chiral and achiral dyes were employed in comparison of image formation in the case of double- and single-leaflet staining, and it has been observed that the chirality is an important factor in contrast generation mechanism. This approach is employed in capturing different diffraction patterns of breast cancer cells, and it helps in developing methods to discriminate expressions of various breast cancer cells from their diffraction patterns. This method has more sensitivity toward fiber structure and collagen-related variations that occur in diseases like fibrosis, cancer, and connective tissue disorders.

The development of photonic nanostructures, induced by laser, at the surface of polymer can be utilized for cell biology applications. The ripple structures are capable for governing alignment, adhesion, and cultured live-cell migration. Processes such as sorting of cells and performing biological assays help in studying the primary cell culture. Cell transfection is a process in which genetically nucleic acids are introduced into the cells.
Cell transfection process involves electroporation at the surface of photo-chemically modified polymers by providing better adhesion to attached cells. Cell transfection is an efficient approach utilized for studying gene function and gene products that are present in cells. Cell sorting can be easily attained by targeting cell-specific membrane proteins with surface-immobilized antibodies.
Reviewed by Afsaneh Khetrapal BSc (Hons)