A new study, conducted by researchers from the Penn State Eberly College of Science, indicates that the disease-carrying ability of flies could be much greater than previously thought. 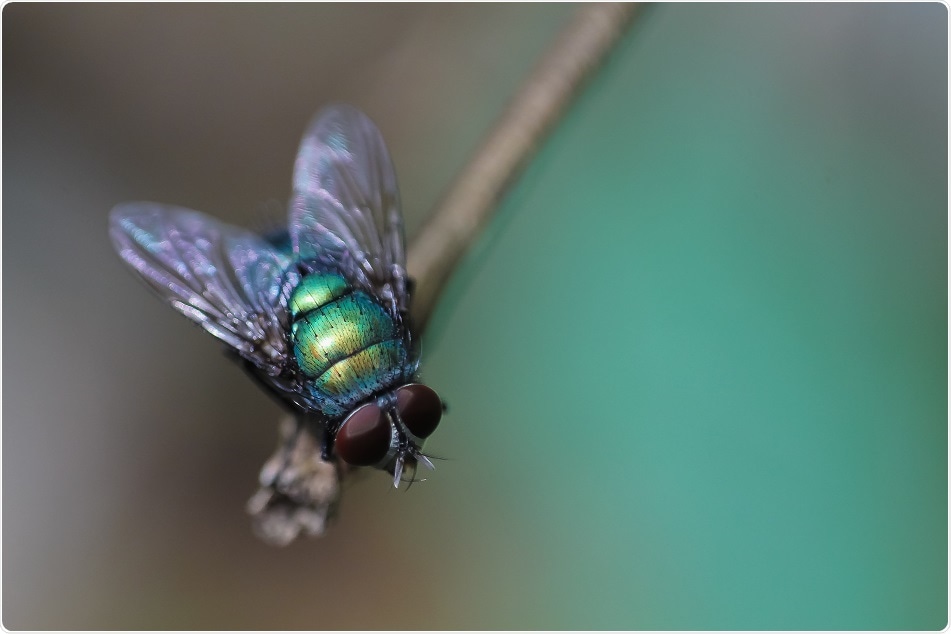 Credit: Athul V Aleyas/ Shutterstock.com
During a research carried out on the microbiomes of 116 blowflies and houseflies from three different continents, researchers identified that, in some cases, these flies carried hundreds of various species of bacteria, many of which pose a threat to humans. Researchers have long suspected that these flies played a vital role in carrying and spreading diseases, as they often live nearby humans.

We believe that this may show a mechanism for pathogen transmission that has been overlooked by public health officials, and flies may contribute to the rapid transmission of pathogens in outbreak situations."
Donald Bryant, Ernest C. Pollard, Penn State

Stephan Schuster, former professor of biochemistry and molecular biology, Penn State, indicated that the researchers were able to examine the microbial content of individual body parts of flies, such as the wings and legs.
Most of the microbial organisms were transferred from one surface to another through the legs of the flies. The wings and legs show the highest microbial diversity in the fly body, indicating that flies are utilized as airborne shuttles by bacteria, Schuster added.
Carrion fly species such as houseflies and blowflies are frequently exposed to unhygienic matter as they utilize decaying organic matter and feces to nurture their young, where they could acquire bacteria that could function as pathogens to plants, humans, and animals.

Furthermore, the study shows that houseflies and blowflies share approximately 50% of their microbiome, a mixture of microorganisms that are associated with the host and those picked up from the environments they inhabit. One notable finding was that flies collected from stables were found to carry fewer pathogens compared to those collected from urban environments.
Researchers identified 15 occurrences of a pathogen, known as Helicobacter pylori, which often causes ulcers in the human gut, mostly in the samples of blowfly collected from Brazil. Schuster stated that the known route of transmission of Helicobacter has never regarded flies as a probable vector for the pathogen. The disease-carrying ability of the flies may intensify when more people exist.
Ana Carolina Junqueira, professor of genetics and genomics at the Federal University of Rio De Janeiro stated that the new computational and genomic approaches utilized in this study enabled the researchers to have a remarkable look at the microbial community carried by flies.
Junqueira further added that the microbial-transmission capability of the houseflies and blowflies were never analyzed comprehensively using deep DNA sequencing and modern molecular approaches, though they are considered as major mechanical vectors across the world.
Nevertheless, flies may not be all bad. Researchers suggest that they can be utilized as living drones that can function as an early-warning system for diseases.
Source:
Publicado por salud equitativa en 7:15