A new study published in the online journal Gut suggested that the prolonged use of proton pump inhibitors (PPIs) that are mainly utilized in treating acid reflux is associated with more than a two-fold increase in the risk of gastric cancer. 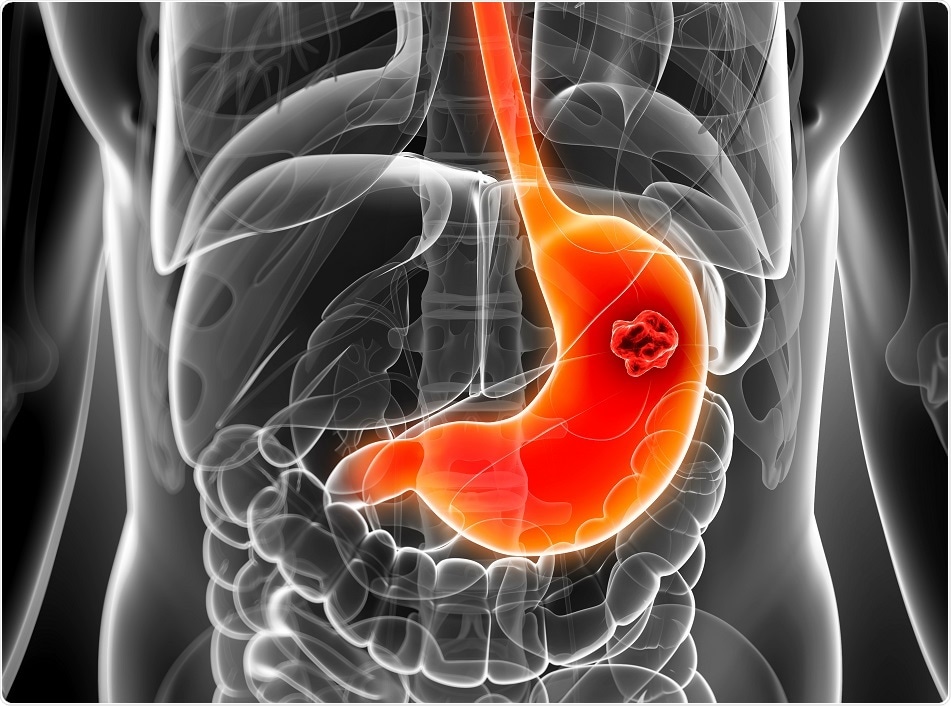 Credit: Sebastian Kaulitzki / Shutterstock.com
According to the study, after the elimination of Helicobacter pylori — bacteria associated with the cause of gastric cancer — the risk increases with the increase in the duration and dosage of the treatment.
The risk of stomach cancer, which is the third leading cause of cancer death worldwide, can be lowered significantly by removing H pylori from the gut of the patients. However, there exists a chance of recurrence in a considerable number of patients even after successful treatment.
Prior research had indicated a link between use of PPI and increased risk of stomach cancer; yet the potential role of H pylori was left unidentified.
In order to determine this, researchers compared PPIs’ usage with histamine H2 receptor antagonists (also called as H2 blockers, another type of drug used to reduce acid production) in 63,397 adult patients treated via triple therapy between 2003 and 2012. In triple therapy, H pylori are killed by using a combination of a PPI and two antibiotics over 7 days.
Successive monitoring of the participants was carried out until either of the three occurred — development of stomach cancer, death of the patient, or the end of study, whichever happened first. The mean observation period lasted for 7.5 years.
During the observation period, 5% (3271) of the participants were provided with PPIs, for an average of around 3 years, while 21,729 were given H2 blockers.

153 participants (0.24%) developed gastric cancer post triple therapy; no participants were diagnosed with H pylori even though all of them had prolonged gastritis.
The results indicated that PPIs were linked with a doubling of the risk (2.44) of developing stomach cancer, whereas H2 blockers were not linked with any such elevated risks. The mean time taken between triple therapy and the occurrence of gastric cancer was just below 5 years.
The findings also suggested that more frequent use of PPIs was related with higher risk; in comparison with weekly usage, using PPIs daily were associated with 4.55 times increased risk.
Prolonged usage of PPIs raised the risk by 5 times after a year; over 6 times after two or more years; and over 8 times after three or more years.
The researchers commented that PPIs are normally considered safe and as the study is observational, firm conclusions on cause and effect cannot be determined.
However, the latest studies had associated the long-term use of PPIs to numerous ill-effects like heart attacks, pneumonia, and bone fractures. They are also thought to stimulate gastrin production, which is a strong growth-factor.
Due to this strong dose and time response trend in the usage of PPIs and risk of gastric cancer, the researchers recommend doctors to be cautious when prescribing long-term PPIs even after eradicating H pylori successfully.
Source:
https://eurekalert.org/pub_releases/2017-10/b-ltu103017.php
Publicado por salud equitativa en 9:54