By Dr Ananya Mandal, MD,November 19, 2017
Heart break is actually damaging for the heart finds a new study. Researchers have found that persons undergoing a heart break could suffer from damages to the heart that is similar to heart attacks.
The study came from the British Heart Foundation (BHF). The findings of the study were presented at the American Heart Association Scientific Sessions in Anaheim, California. 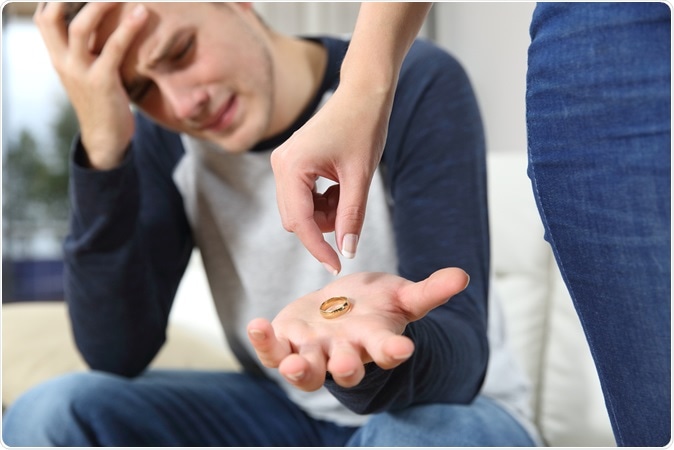 Image Credit: Antonio Guillem / Shutterstock
The team of researchers from the United Kingdom noted that heart break leads to particular heart condition that is called takotsubo syndrome or broken heart syndrome. It is a result of severe emotional stress. This severe emotional stress leads to weakening of the walls of the heart. This leads to the muscles of the heart being significantly weakened. This weakening comes from hearing about the loss or death of a loved one or severe mental or emotional trauma or even after being rejected in love.

To study this, the team of researchers from the University of Aberdeen looked at 37 patients who were diagnosed with takotsubo syndrome for a couple of years. These patients underwent all tests including ultrasound scans, MRI scans and physical tests. They found that these patients had heart conditions similar to those who had had a heart attack or cardiac arrest.
Associate medical director of the BHP, Prof. Jeremy Pearson, said that the researchers were looking for recovery symptoms in these patients. But this study revealed that heart break can cause long term consequences on the heart.  He said it was a devastating disease because it affected otherwise healthy persons.
Head of the team of researchers who conducted this study was Dr. Dana Dawson who added that this syndrome was more common than earlier believed and its consequences can be long term. She said this syndrome needs to be given its due importance and treated urgently as any other heart condition. Earlier it was believed that the effects of Takotsubo cardiomyopathy was temporary and the effects went off as the stress was relieved with time. But now it is seen that the damage persists. It may stop the heartfrom functioning normally to pump out blood. This weakness of the heart as a pump leads to several consequences such as heart failure. These patients might need longer term treatments she said and added that the team was looking at potential treatments for this heart condition.
Takotsubo cardiomyopathy
Takotsubo cardiomyopathy is also called broken heart syndrome. It has been detected and diagnosed in at least 3,000 people in the UK and thousands more suffer from this worldwide and often go undetected. Bereavement, loss of a loved one or severe rejection in love can trigger this condition.
The disease was first identified and named in Japan in the 1990s. It literally means “octopus pot” that is the description for a deformed heart after a heart break. Some researchers have also found that excessive happiness might also lead to this heart condition.
Earlier studies have shown that over 90 per cent of reported cases of Takostubo are females with age ranges between 58 and 75 years. This came from a study by a team from Harvard Medical School.
Reference: https://www.bhf.org.uk/news-from-the-bhf/news-archive/2017/november/time-wont-mend-a-broken-heart
Publicado por salud equitativa en 7:48