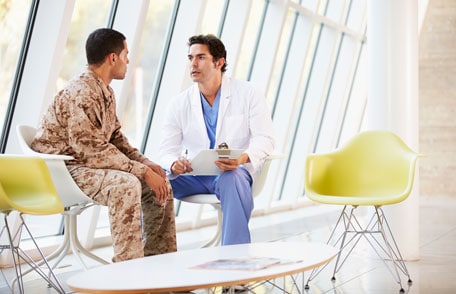 November is National Epilepsy Awareness Month and November 11 is Veterans Day. Veterans are at higher risk of developing epilepsy. Learn more about resources to help veterans and families.

Epilepsy is a broad term used for a brain disorder that causes reoccurring seizures. A seizure involves sudden, abnormal electrical activity in the brain that causes brief changes in how a person behaves, thinks, or feels.

How many veterans have epilepsy?

In 2015, about 3 million U.S. adults age 18 and older had active epilepsy (which means the person was diagnosed with epilepsy by a doctor and they were under treatment or had recent seizures).1 Experts aren’t sure exactly how many veterans have epilepsy. The Veterans Health Administration (VHA) estimated that the prevalence of veterans with epilepsy under treatment at VA facilities was 13.8 per 1000 in 2015.2 Think of that number this way: if 100,000 veterans were in attendance at an event, almost 1,400 of them would be in treatment for epilepsy in VA facilities. The VHA data show that about 13% of veterans with seizures were less than 45 years old, 39% were between 45-65 years old, and about 8% were female.2 There is help for veterans who are newly diagnosed with epilepsy.
Because having active epilepsy will almost always prevent someone from being accepted into the military, epilepsy usually develops in veterans during or following military service.3 Veterans are at higher risk of developing epilepsy than the public because they are more likely to have traumatic brain injuries (TBI) and post-traumatic stress disorder (PTSD).4,5 TBI and PTSD are also associated with psychogenic non-epileptic seizures (PNES). PNES look like seizures but are not associated with abnormal electrical activity in the brain and are caused by psychological (mental or emotional) distress.

The VHA Epilepsy Centers of Excellence (ECoE) is a network of 16 sites that provides comprehensive treatment and support to veterans with epilepsy or seizure disorders, including PNES (3). The ECoE’s video series, “Veterans and Epilepsy: Basic Training,” provides education and aims to reduce epilepsy stigma. This ECoE website also has videos about medicine and side effects, depression, seizure first aid, and other topics.
Additional community-based resources for veterans and families can be found at the Epilepsy Foundation website.
CDC also supports community-based resources and services or all adults with epilepsy, training resources for health care and other professionals, and evaluates epilepsy self-management programs in veterans with epilepsy.